Do nice people annoy you? I’m not talking about someone who is polite and well-mannered – we all appreciate that. I’m referring to people who are a little ‘too’ kind. Those who give away more than they can afford – of their time, their money and whatever other resources can be shared. Even worse, they do so with a smile on their face and never complain about the consequences. People like that can be annoying … I wonder why? Could it be that, when forced to compare their behavior with my own, I am found wanting? While I might be something of a soft touch when I hear a sad story, I only give within my budget. Once it runs out, I’m likely to say ‘sorry’ but unlikely to go into debt on behalf of a stranger (or even a friend). And if I observe someone who is in worse financial straits than I am, giving to that cause anyway … it annoys me! I’m ashamed to admit it, but I might even look for reason to criticize that unselfish giver, accusing her of less than wise stewardship, or asking who is supposed to pay her bills if she goes broke being good to others. 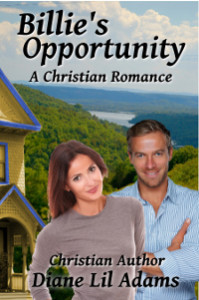 Billie D’Allesandro is the sort of character whose generosity would bother my conscience. She feels blessed by her success, even if it isn’t much to brag about. She looks for opportunities to share with friends and family, without waiting to be asked. But rather than return her kindness with grateful thanks, most of them rebuke Billie for playing the fool.

That’s exactly how Chad Moore feels when he stays at Billie’s B&B and sees her charitable nature in action. She annoys him, especially when she ignores his advice. At the same time, Billie’s sweet nature intrigues him … and gradually wins his heart.

I wish I could be as good a person as Billie D’Allesandro. Writing about her made me feel ashamed of my less than Christian attitude, and that’s a good start!