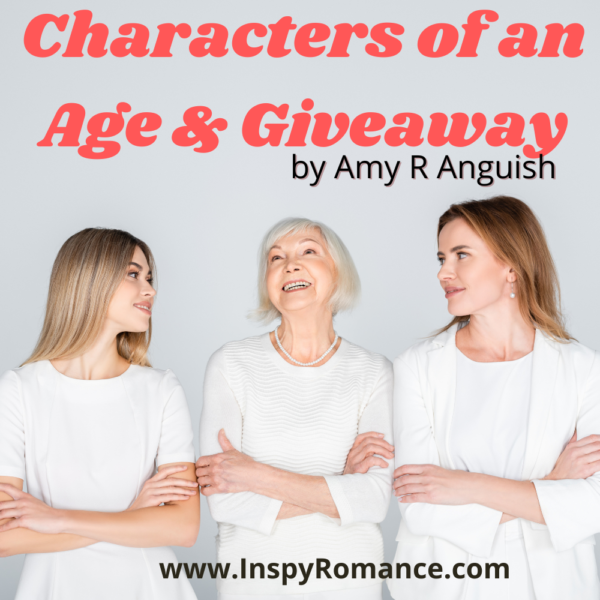 One of the “Big” birthdays is about to happen in my life. Though it doesn’t feel nearly as big as it did when I was in my twenties. Amazing how the number 40 loses its ability to scare a person the closer she draws to it.

But it does have me thinking.

Even though I am no longer in my twenties, my characters, for the most part, are. And if they’re not, they’re barely in their thirties. Honestly, I expected to start writing characters a bit older as I aged, but the last few story ideas I’ve had all star characters even younger than I started out writing. Destination: Romance has three girls fresh out of college. And while I was married a month after graduation, I know it’s not the trend anymore.

I’m not saying I won’t write older characters in the future. I have enjoyed several series recently with “older” characters, some not even starting a romance until forty. But, I also want to point out I am not alone with my characters stuck in their twenties.

I polled several of the InspyRomance authors on the average ages of their characters. Almost every single one who answered said her characters were late-20s to early-30s. Right around the norm for the average marriage age. Although several agreed with me that even though a lot of people don’t think a marriage will last if it starts early, it can. We’re living proof. I was married at 21 and have lasted over 18 years and still going strong.

So, what’s my point?

I guess I’ve just been thinking about age a lot lately, with this “big” milestone age coming up in a few weeks. When I married fresh out of college, I had no idea what might happen down the road. I just knew I really liked the guy who had been dating me and thought spending our life together sounded like a great idea. And it has been.

Would we have been the same kind of couple if we’d waited to marry in our later twenties or even our thirties or forties? Probably not. For every year a person lives, she (or he) adds experiences and life skills and maybe even some tragedy. Things that can change who we are as people.

And as I write, whether my characters are right out of college, still expecting life to be all roses and butterflies (ha!), or later in their thirties or forties, there can be a great romance no matter what. Because romance isn’t limited by age. Though I may stick to the ages I’ve been writing a while longer for nostalgia’s sake if nothing else.

I’m sending a $5 Amazon gift card to one person who leaves a comment below. What do you prefer? Do you like stories to stick closer to the national average of when people are starting their marriages? Do you care what age a character is? Or do you like to go back and remember the innocence of being a young 20-something who is madly in love?