Hey, everyone! Carol here! There’s so much to love about July itself – the Fourth of July is a BIG one, of course! Getting together with friends and family and celebrating independence is always fun! 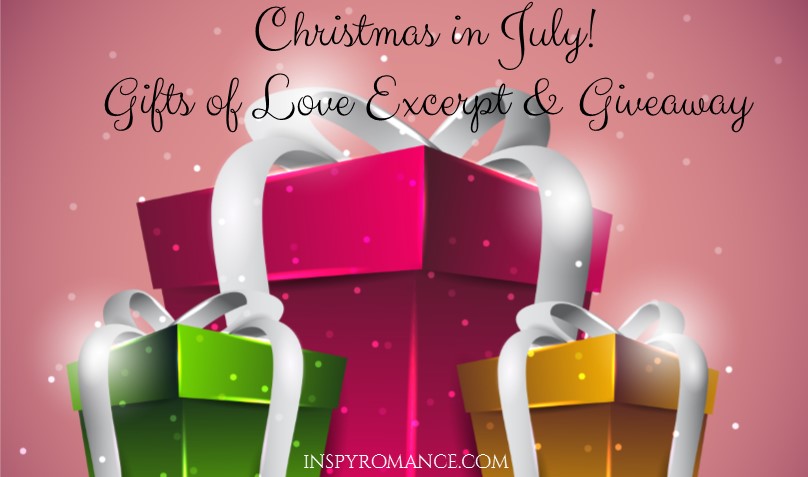 But we have this one set of friends we’ve known for like…20 years or close to it anyway. They own our local Chick-fil-A and for many years owned the mall store. So we never “did Christmas” anywhere near Christmas. They barely had time for their own families that time of year. 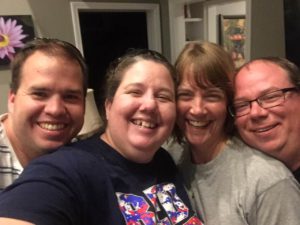 And, you guessed it, we often have Christmas in July!

So to celebrate Christmas in July, I released my Christmas novella, Gifts of Love, as a single. Previously, it was only available in the Snowflakes and Mistletoe collection. But, really, is there any seasonal limitations on gifts – or love?! Plus, it’s super hot here this July, and reading about winter and snow might make me feel cooler ;).

We first met Samantha and Vince in Good Enough for a Princess but Gifts of Love can be read as a stand-alone.

So here we go:

“I volunteered you to organize the faculty Christmas party.”

Samantha Dean just glared at the man on her doorstep. After he waggled his eyebrows at her, she finally responded. “Why would you do that?”

Vince Roberts pushed past her, shedding his scarf and coat as he walked further into the house. “Because you need a good dose of Christmas spirit this year, Sami. You’re playing Scrooge already, and it’s only Thanksgiving.”

He had a point, but she didn’t care. She wasn’t in the mood to celebrate anything. Normally, she put out a veritable cornucopia of Thanksgiving decorations, but this year? None.

Vince’s voice drifted back to her from the kitchen. “So what if Charlie got married a few months ago, and he’s already a Prince Consort of some little European country you’d never heard of this time last year. You two were really never actually a thing anyway.”

“Why are you really here, Vince?” She pushed the front door shut and found him with his head in her refrigerator. Her nearly empty refrigerator.

“You shouldn’t be alone on the holidays.” He straightened up and let the door close. “So, you have two choices.” He held up one finger. “Come with me to my sister’s house.” Another finger. “Or I’ll stay here with you, and we’ll try to make Thanksgiving dinner out of baking soda, pickle juice, leftovers turned science experiments, and questionable milk.”

That sounded appetizing. But it still sounded better than going to Vince’s sister’s house. She’d done that for Thanksgiving once. In college, right before their second date. In fact, Vince had been happily friending along when they went to his sister’s, because her parents had just moved away. Then, under the influence of eggnog and pumpkin-flavored-everything, he’d asked her out, and she’d been foolish enough to say yes.

The two things in her life she truly regretted were dates with the man standing in front of her. His maddeningly casual demeanor and easy smile as he leaned back against her newly remodeled kitchen counter irritated her to no end.

“So which is it going to be, Sami?” He hopped easily onto the counter behind him, his heels hitting the cabinet doors lightly.

“Option three. You leave. I order pizza.” She crossed her arms again and glared.

Something he must have become immune to.

Oh! He knew she hated that nickname, even worse than being called Sam, a throwback to her tomboy days. “Fine. But I’m driving myself.” No way did she want to be stuck there at the mercy of Vince and his Camaro.

“Nope. She moved, and you don’t know your way around. You’ll get lost trying to get back out of the area.”

He had a point. Her sense of direction was challenged at best. Thank God for talking GPS. She also knew when she wouldn’t win the fight with the stupid man. “Fine. Whatever.”

“Good. Go change. Jeans and a decent shirt will be fine.”

Samantha glanced down at her ratty sweatpants and a Serenity Landing Elementary II t-shirt that had to be at least a decade old. Not sparing him a glance, she went down the hallway to the master bedroom, as far away from the kitchen as she could get, and slammed the door behind her. She didn’t bother to lock it. He wouldn’t come in. She did her best to stall for more time and come up with some story that would get her out of this, but nothing came to her.

Finally, with her favorite jeans on and paired with a sweater in Thanksgiving colors, she slid her feet into knee-high black boots with the three-inch heel. Her feet would be killing her by the end of the day, but she’d look great.

After putting on some lip gloss, she grabbed her purse and went back to the kitchen only to find Vince down the other hallway, near the spare bedroom and library, looking at a picture collage.

“You and Tricia were tight.” It wasn’t a question because he’d been there for all of it.

“You were one of the first ones to hold Lindsey when she was born, right?”

So that’s what picture he was staring at. The one of her holding Tricia’s baby girl, the baby Tricia abandoned with Charlie just a few weeks later. “Yes. She wouldn’t let Charlie in, but her mom was with her during the birth. I was the first one they let in after that.” Did he realize how painful that day had been for her?

He turned to look at her, his brown eyes filled with a compassion she didn’t want from him. “Lindsey and Charlie are happy, you know. They love Addie and their life in Montevaro. He still has his private Facebook. He hardly ever posts, but he did post a picture of Lindsey skiing the other day. She was beaming.”

“I know. I saw it, too. I don’t want to talk about it.” She’d had a crush on Charlie since she was ten. Even though he’d been married for a few months, she wondered if she’d ever truly be able to put him behind her and get on with romance in her present life. “Let’s go.”

But she knew, when she did start dating again, it wouldn’t be Vince.

If you follow me on Facebook, you’ll sometimes see me post pictures of a friend’s rec room where I go write. That’s actually Steve and Ginger’s house. This book was written (mostly) in two long days in that room – in August – with Ginger’s Christmas CDs to help me along ;).

Have you ever celebrated Christmas in July? We are headed over to Steve and Ginger’s for the 4th and will likely make our plans then :).

One lucky commenter (before July 15) will receive a Kindle copy of Gifts of Love! 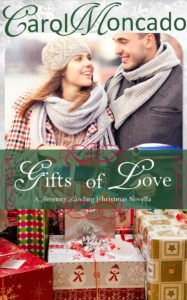 Samantha Dean has two major regrets in life-and both of them are dates with Vince Roberts. But somehow, since they started teaching at Serenity Landing Elementary II, he’s managed to worm his way into her life and make himself indispensable.

Vince Roberts has loved Samantha since their first date, though he hasn’t done the best job of showing it. Spending time together is one reason he volunteered both of them to plan the staff Christmas party.

They work together to take care of one of their own, dealing with the recent death of her husband in a house fire. As they plan the party, Samantha tries to keep Vince from finding his way into her heart. Will she admit the feelings that have been growing for so many years or walk away from Gifts of Love?