What’s the best season of the year for romance?

Beach reads are all the rage right now because (duh) it’s beach season.  When I think of summer romance, though, I think of hot and steamy.  Literally.  My first summer here on the east coast, I complained about the weather.  One of the women I was with laughed at me.  “Oh, sweetie.  You ain’t seen nothing till that humidity gets up to 100%.”

I’m pretty sure my jaw dropped.  I pictured us all walking around minding our own business and spontaneously drowning mid-stride.

I prefer a good winter romance.  Bundling up, throwing snow balls at each other, then curling up with hot apple cider in front of the fireplace afterward… Now that sounds like romance.  There’s nothing like the threat of hypothermia to give two people a legitimate reason to cuddle, right?

Which brings me to Christmas in July.  It’s a theme I’ve heard  often over the years.  It’s been used in drives to collect school supplies for the less fortunate, promote early sales of clothes for the coming school year, do blog hops, and more.  In fact, this past Sunday, our closing hymn at church was “Joy to the World.”  The music leader even said, “Who doesn’t love Christmas in July?”

So, why not embrace it?  Christmas in July!  Besides, if you live in one of those hot and steamy places, then a good Christmas romance might be just what you need!  And if you live in a more temperate climate, that’s okay.  You’re allowed to crave a good snowy romance, too! 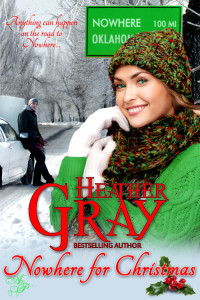 Here’s the back cover blurb:
Anything can happen on the road to Nowhere…

A journalist and single mother, Avery is used to being in control though she tries to remind her-self to let God take lead in her life. Eli, her son, is happy as long as he has his music, plenty of food, and the occasional adult on which to practice his rapier wit. Gavin, a virtual stranger, is a photojournalist who mysteriously dropped off the scene a few years ago.

The trio ends up together for a Christmas road trip to the small town of Nowhere. An eight hour drive in a rental car turns into two days of misadventure and calamity as bad luck stalks them. They get a flat tire, the bumper falls off, the car overheats – and that’s only the beginning! Along the way they meet some interesting people – from a bait shop owner who moonlights as a mechanic to a chatty preacher’s wife and a highway patrolman whose wife and mother can’t agree on the best way to remove a skunk’s stink.

Hungry, cold, and tired, the three finally reach Nowhere only to discover the town is nothing like they expected. They learn that reaching their destination doesn’t necessarily mean the journey has ended.

“Sorry about the wind,” Officer Sterling said to them as he pushed the button to lower both front windows. “I’ve got to do something to try to keep the stink out of my face, or I won’t be able to see to get us back to Lawton. Man, oh man, it’s been a long time since I smelled anything as fierce as this. It’s a tenacious smell, too, ain’t it? The folks in the garage are going to spend weeks trying to get the smell out of this car, and I ain’t even the one who hit the little varmint.”

“Uh, yeah, it’s a strong smell alright,” Avery said, not entirely sure if the officer even wanted a reply.

“It burns, too,” Officer Sterling added. “Burns something fierce. I think my nose hairs might have been singed off. And my eyes feel all dry and crackly like firewood that’s about to explode. Except for when the tears start pouring out, I guess. And don’t even get me started on the nausea. How it is y’all aren’t back there puking your guts out from having to smell yourselves is beyond me.”

How do you think it feels to be back here next to two other people who suffered the same malodorous fate? You’ve got it easy up there, mister!

“Whoo-whee, that sure is one awful stench!”

“Okay,” Gavin cut in. “We get it. The smell is dreadful, and it’s not going away. What’s supposed to happen to us when we get to Lawton?”

“Well,” said Officer Sterling, “I suppose you can book a flight and head on back to Albuquerque.” 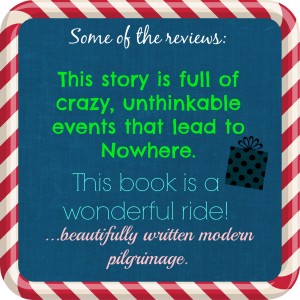 “Peachy,” Eli commented. “If you can’t stand to have us in your car without the windows open, how are we supposed to fly back? The folks on the airplane won’t be able to open their windows and blow the smell out of their faces.”

Officer Sterling then proceeded to pick up his radio and call dispatch, “Hey there, Norma Sue, you read me?”

“That you, Joe?” came the disembodied high-pitched voice over the radio.

Aha! So his first name isn’t Officer after all! A little giggle escaped, causing Avery’s seat companions to look at her oddly.

“Yeah, it’s me. I found those three travelers out at Nowhere, but we got us a problem.”

“They look as scary as a bunch of serial killers? Maybe cannibals? Should I call SWAT?”

Officer Sterling glanced over his shoulder at them and blushed. In a loud whisper he said, “Hush, Norma Sue. They’re in the car with me.”

The equally loud whisper came back over the speaker, “Oh, sorry about that. They’re not threatening to eat you, are they?”