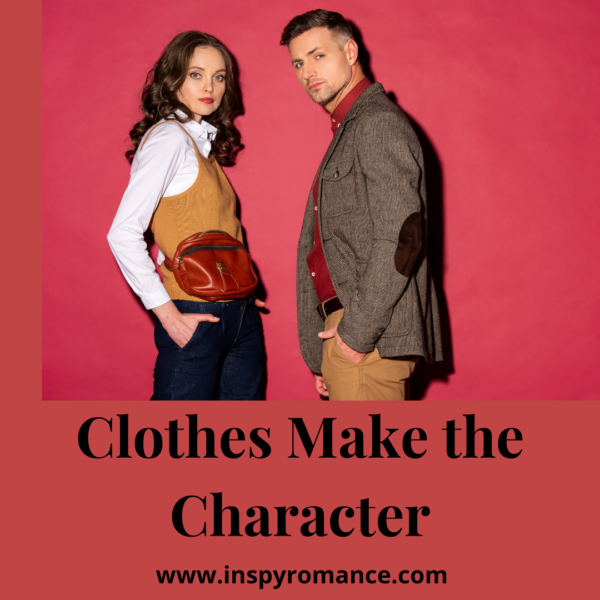 What would you say about this couple based on their clothing? Do you pay attention to the description of a character’s clothing when you are reading a book? I have to admit as a reader that I often don’t. I may read what the author wrote about the character’s clothing, but as the scene unfolds, I find myself completely forgetting what a character is wearing. I’m more into their thoughts and feelings and actions.

When I put on my writer’s hat, I have to remember to give my characters clothing. Many times I don’t mention the character’s clothing unless it is important to the scene or I’m trying to convey something about the character. For instance in my new release, MIRACLE BABY, I use clothing to give an impression. Here’s a short excerpt.

“Good morning, Chase.” Barry’s greeting was congenial. “Is your father on his way?”

“While we’re waiting for your father, let me introduce you to Marisa’s sister, Dorinda Morales.”

As the man came into view, Dori’s stomach lurched and her palms grew moist. His gray, pinstriped suit emphasized his broad shoulders and his height, which had to be over six feet. He strode toward her with a look of confidence. She willed herself to be calm as she smoothed her hair that was drawn back in a loose knot at her nape.

He smiled, and a dimple appeared in his right cheek. Despite his friendly demeanor, she didn’t want to like him. It wasn’t the Christian thing to do, but he had never associated with Marisa and Tyler when they were alive. Now that they were dead, he suddenly appeared. She wanted to pray that God would help her treat Tyler’s brother as she should, but God had sometimes seemed far away in the past few weeks.

Surreptitiously wiping her hands on her skirt, she stood and extended her hand. “Hello, Mr. Garrett.”

“Please call me Chase. May I call you Dori? That’s what Tyler called you.” His large hand closed around hers.

“Sure,” she said, unable to deny his request even though she didn’t want to like him. His infectious smile immediately disarmed her while little shivers ran up her spine. Surely they came from her desire not to like him, but she wasn’t certain of anything.

When had Tyler ever mentioned her to Chase Garrett? Why was he having this effect on her? There was nothing to like about a man who hadn’t bothered to be part of his brother’s life for ten years. Like Warren Davis, this man hadn’t attended Tyler’s funeral. She withdrew her hand and returned to her chair. She should know by now she wasn’t a very good judge of men, and her reaction was nothing more than her propensity to fall for the wrong type.

Dori observed Chase as he settled in the chair next to hers. The only clue to his thoughts was the rigid set of his shoulders. His eyes, a kaleidoscope of blues, greens, and browns orbiting the sunburst around his pupils, held no hints to what he was thinking. His handsome features remained unreadable.

The secretary’s voice came over the intercom, but before she finished speaking, Warren Davis barged into the room. His finely tailored charcoal-gray suit, flamboyant tie, and Italian leather shoes subtly reminded Dori that he was a very rich and powerful man. His black hair, except for the touch of gray at the temples, and his blue eyes were just like Tyler’s. Except Tyler’s eyes had been like a warm summer sky while Warren’s made her cold like the dead of winter. Chase, with his tobacco-brown hair and multicolored eyes, didn’t look like either one of them.

Casting her a derisive look, Warren took a seat on the other side of Chase.

“Good.” Warren leaned forward in his seat. “Let’s get right to the point. I’m not going to sit here and let my son’s estate fall into the wrong hands. The Morales family has been after Tyler’s money ever since he married their daughter. They aren’t going to have it now.”

Rage boiled inside Dori. She clenched her fists in her lap. Heat suffused her cheeks as she glared at Warren. He glared back. She wanted to lash out at him and tell him to keep his false accusations to himself, but she looked at Barry and ignored the two other men. No matter what they thought, she had the truth on her side.

“Mr. Davis,” Barry said calmly, but forcefully, “I’m in charge of this meeting. Please be quiet and listen.”

Barry got up from the desk and handed each of them a folder. “In the folder you’ll find a copy of Tyler’s will and a copy of Marisa’s will. You can see they are mirror images of each other. Since they are both deceased, we go on to the next of kin being the minor child, Joshua Tyler Davis. He inherits the bulk of the estate, which is held in trust for him until he reaches the age of twenty-five. Dorinda Morales is named as guardian for the minor child. Chase Garrett is the executor and trustee of the estate. One hundred thousand dollars goes to Warren Davis.”

Taking in Barry’s last statement with disbelief, Dori looked at Chase and found him staring at her. She returned his gaze. How could Tyler have named his estranged half brother as executor of his will? Why had Marisa agreed to it? What had they been thinking? And why had Tyler left money to the father who had disowned him? Dori dropped her gaze to her lap as her mind buzzed with the questions. She jumped when Warren surged to his feet.

“I’ve heard enough.” He strode to the door. “Chase, are you coming?”

Chase stood and looked across the desk at Barry, then at his father. “No, I’m staying. No matter who inherits this estate, I’m still executor.”

“Suit yourself.” Warren exited from the room.

Chase turned his silver Lexus onto the quiet street and waited for the GPS to indicate that he was at his destination. When the mechanical female voice told him he had arrived, he looked at the tall brick house with the perfectly manicured lawn. All the houses looked the same, as if they had been cut from a giant cookie cutter and placed along the street against the backdrop of a bright blue Texas sky.

His stomach churned and his heart thudded as he rang the bell. A shadowy figure appeared behind the leaded glass in the front door. Would Dori receive him with guarded acceptance or outright hostility?

The door opened, revealing a two-story foyer. Dori stood on an Oriental rug lying on a golden wood floor. The pink shorts and matching print top she wore made her look young, a sharp contrast to the sophisticated woman he had seen this morning. Tyler had told Chase she was twenty-nine years old, just four years younger than he. Now she looked barely out of her teens. With her dark-brown hair falling around her shoulders, she appeared approachable, even friendly, but distrust still showed in her eyes.

Be sure to look for my new release, Miracle Baby. 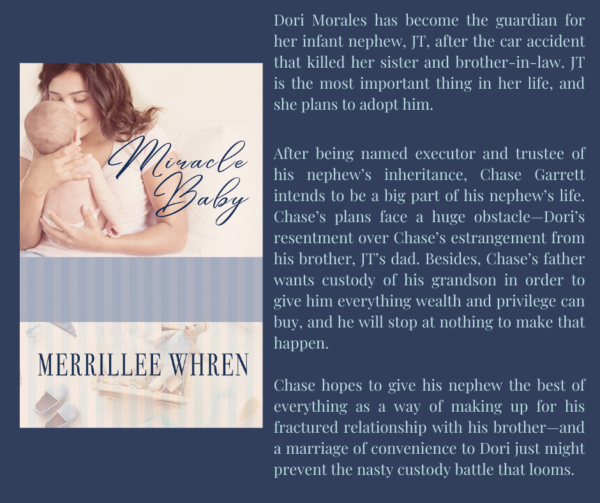 I will give away an ebook copy of Hometown Promise, the first book in my Kellersburg series to one person who leaves a comment. I will draw the winning name on June 26, 2021 at 6PM MST.