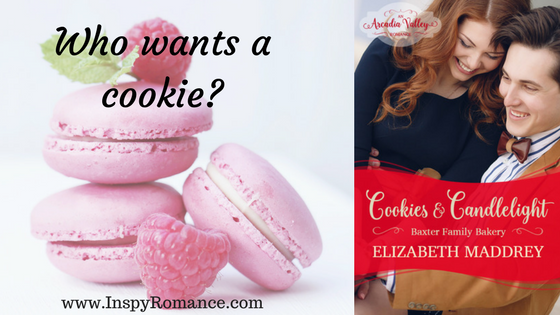 I’m very excited that in just two and a half weeks, on September 12th, the next book in my Arcadia Valley Romance Baxter Family Bakery series will release!

The Baxter family bakery, called A Slice of Heaven, is run by three brothers (Jonah, Micah, and Malachi) who, along with their sister Ruth, moved to Arcadia Valley, Idaho, to start a new life. If you’ve been keeping up with the multi-author series set in Arcadia Valley, then you’ve already met Ruth (in Loaves & Wishes, a novella that’s part of Romance Grows in Arcadia Valley) and Malachi (in Muffins & Moonbeams, which released in March of this year.) Now, it’s Micah’s turn to find love.

What will it take for a former starlet to find love with an average Joe?

After the accident that killed her husband five years ago, Serena Johnson left Hollywood—and her stage name—behind to set up shop as a potter. Her online business keeps her occupied and fulfilled, but she misses having someone special to share her life.

Micah Baxter has enjoyed the year he’s worked in his family’s bakery in Arcadia Valley, even if his siblings are all finding love, leaving him the odd man out. When Micah delivers the cookies Serena ordered for an event at her pottery studio, the attraction between them is hard to deny. But so are their differences.

Having been a fan when he was younger, Micah knows all about Serena’s bad-girl history. So how can he trust the feelings that grow between them? And if Hollywood comes calling, will Serena be content to stay?

I had a lot of fun writing Serena. I generally tend to stick with characters who might live next door to me. You know, the average, everyday kind of person. And that’s really what Serena is trying to be. She just happens to have run away from Hollywood to try to do it. Even with her background, I think Serena ended up being a fairly down-to-earth gal, and Micah is just the right guy for her. She just has to convince him of that.

To whet your appetite a little, here’s an excerpt:

“Oh, thank goodness. I wasn’t sure you’d actually get here in time. Bring them this way.”

Micah stood rooted to the front step as the woman with fiery red hair disappeared into the house. Questions zipped through his mind, but there was no point asking them. She was gone. Hefting the two paper shopping bags full of cookies, muffins, and bread, he tentatively stepped into the foyer and followed down the hall in her wake.

That hair. Where did red like that come from? It was like liquid flame spilling down to her shoulders.

He gave himself a firm mental shake and stepped into a large, two-story living area. The two outside walls were floor to ceiling windows and sunlight spilled over the space, highlighting the gleaming mission-style furniture and brightly colored ceramic pots scattered around the room.

“In here. Look, I’m running behind. Can you put them on these platters?”

Micah spun. An enormous kitchen sprawled across the back of the room, separated from where he stood by an island with six stools pulled up to the overhang.

He cleared his throat. “Ms. Johnson?”

“That’s me. Serena’s fine. Here are the platters, I really need to hurry. My guests are going to be here in fifteen minutes.”

“We don’t really…” Micah stopped and sighed. She’d disappeared again. Fine. He could throw cookies onto trays. But Malachi was getting a piece of his mind when he got back to the bakery. Not only was her place so far north of town it was practically another country, but he wasn’t a caterer.

He lifted the bags to the counter and turned to the sink. He flipped the handle on the faucet and thrust his hands under the water. Soap. Was there…he spotted a ceramic bottle with a pump on the top. Worth a shot. A girly and floral aroma permeated the air as he scrubbed up a thick lather. Micah wrinkled his nose. Hopefully the scent of the cookies would get rid of that. The last thing he needed was to get back to the bakery smelling like a summer meadow. His brothers would never let him hear the end of it.

Hands clean, he pulled the boxes of cookies and muffins from the larger bags and started arranging them on the two platters. He made a circle of muffins in the center and surrounded them with cookies. If the woman—Serena—wanted them separated, she should’ve stuck around. Or done it herself. Delivery didn’t mean set up.

She clipped back into the room on mile high heels. “That looks great. Thanks. Ever made cucumber sandwiches?”

“Do I look like an eighty year-old British woman?” He heard the testiness in his voice but honestly, he’d fulfilled his duties when he brought her the order. He had work he should be getting back to. And fine, there weren’t many customers on a Saturday, but he’d just started a new space opera on his e-reader.

Serena’s grin flashed and her gaze flicked from his head to his toes. Something glinted in her eyes. Appreciation? Couldn’t be. Women didn’t ogle that obviously. Did they?

“Not really. Then again, cucumber sandwiches aren’t that limited in audience.” She checked the slim gold watch on her wrist. “Look. I could use a hand. All you have to do is spread cream cheese. Okay?”

Micah lifted a shoulder. “Why not?”

“That’s the spirit.” She smacked a kiss to his cheek, pointed to a long, oval platter, and gestured vaguely toward the fridge before floating out of the room. “Be right back. Stuff’s in the fridge.”

Micah shook his head. He ought to leave. Just walk back out the front door, get in his car, and head back to the book that was waiting for him by the cash register. Except…he could hear Jonah’s chiding voice in his head. A big order like this one—without even a flinch at the extra charge they’d added for last-minute prep and delivery? Serena Johnson was the kind of customer they needed to keep happy so she’d think of them again when she had…whatever kind of party this was.

Cookies & Candlelight is available for pre-order on all e-book platforms and will release on Tuesday, September 12th. You can find your preferred version on the Arcadia Valley Romance website.

Cookies are part of what brings Micah and Serena together. It starts with maracons, but there are snickerdoodles in there, too. Both are favorites of mine. What’s your favorite kind of cookie?