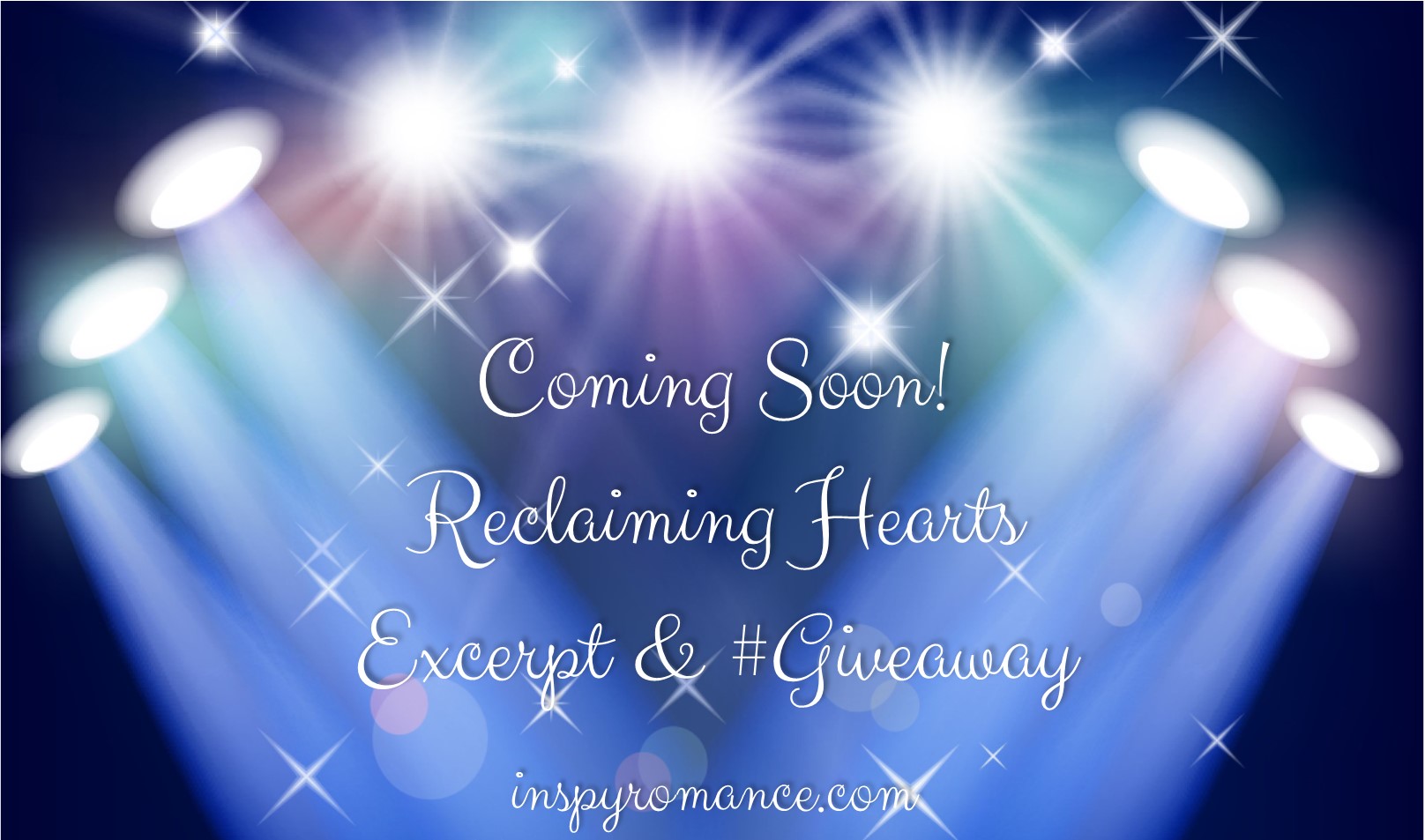 Hey everyone! I’ve been hard at work this week on edits (when my motivation hasn’t been sorely lacking :p – I think I’m still recovering from a fantastic spring break ;)). This book was one of the easiest I’ve ever written (seriously – it practically wrote itself!) and I can’t wait to get it in your hands! So here’s the opening scene from Reclaiming Hearts!

Prince William Richard Stephen Jedidiah, first in line for the throne of Mevendia, hurt in every place he could possibly hurt.

Groaning reached his ears, and he realized it was coming from him. Blinking his eyes open, he found the plane shrouded in darkness. He was on board his family’s plane, right? He tried to think back.

Yes. He was flying home from Serenity Landing. There had been turbulence. Then… nothing.

“Lou? Frankie? Lane?” The pilots and steward were nearby. They had to be.

But there was something else.

“Lady Margaret?” His voice turned more frantic. He was responsible for getting the elderly woman home safely. “Lady Margaret, are you all right?”

William pulled his phone out of his pocket and turned on the flashlight. Lane was in his jump seat near the back of the plane, a bleeding gash on his forehead. With a flip of the release, William took his seatbelt off and went to Lane’s side. He was breathing and his pulse strong. Hopefully, Lane was just unconscious for a few minutes longer than William himself had been.

Ignoring the throbbing pain in his ankle, William worked his way forward.

He found Lady Margaret slumped over in her seat, but no signs of bleeding. Closer inspection showed her hair askew. So the woman wore a wig. Interesting. But not interesting enough. He needed to find Lou and Frankie.

“Sir?” Frankie’s voice came from the cockpit. “Is everyone okay back there?”

“I think so,” William called, heading that way. “They’re both unconscious, but they’re breathing.” Lane was their paramedic, though both pilots had some training.

“We’ll be back in a minute,” Lou called. “It’s taking longer to get out of here than it should.”

Without waiting for them, William unbuckled Lady Margaret’s seatbelt and carried her to the couch where he laid her down. By the time he did, Lane was stirring.

“Careful, Lane. You’ve got a bump on your head.” William probably did, too, but this wasn’t the time.

“Are you all right, sir?” Lane’s eyes were barely open, and he already asked about William. His family had worked for William’s for generations.

“Fine.” Not accurate, but close enough. When the adrenaline rush ended, there would be a heavy price to pay. He already knew that. It almost made him glad his security team had traveled ahead and not with them.

Lou and Frankie emerged from the cockpit. “We’re fine,” Frankie assured him.

“Good.” William stood with his hands on his hips. “Now what?”

“Now we try to get help. We’re not too far from town, but they didn’t know we were landing. Our radio went out before we could send a mayday.” Frankie crossed his arms across his chest. “We need to find shelter, then a couple of us go for help.”

William looked at the debris around the cabin. Some of the stowed miscellaneous luggage had come loose from its bins. He didn’t know what the rest of it was, but something must have hit Lane.

Lou and Frankie exchanged a look. “We’re going to go scout around for a few minutes and see if we can find anything. There’s supposed to be cabins in this area. I think your family’s property is close, sir.”

“I’m not familiar enough with the area to tell.”

After another minute of discussion, Lou and Frankie took powerful flashlights and opened the emergency exit. They’d be back soon.

A groan from the couch caught William’s attention.

“Take care of her, sir.” Lane leaned his head back against the bulkhead. “I’m gonna stay right here.”

William knelt next to the couch. “Lady Margaret? Can you hear me?”

Several more groans came out before a word did. “Liam?”

Liam? No one had called him that in years. And even then…

Rather than let the memories overwhelm him, he pushed them to the side and told himself she just didn’t pronounce his name right after such a traumatic experience.

“It’s Prince William, Lady Margaret. We were in a plane crash.”

“We were?” She sounded more alert and struggled to sit up.

“Stay laying down, Lady Margaret. Don’t try to sit up yet.”

“As best I can tell, a fairly large meadow in the mountains of Eyjania.”

She pushed herself up with one arm until she reached a seated position. “How far from town?”

“I’m not sure. The pilots are outside, scouting around to see if there’s a cabin nearby.”

Before she could respond, Lou came through the door.

“We found a cabin on the edge of the clearing. If you have a small overnight bag you can grab, that might not be a bad idea. We’re farther from town than we thought.”

It took nearly half an hour to get Lane’s arm into a sling and find William’s overnight bag. Lady Margaret’s was easily found.

The cold was setting in. November in these mountains could be harsh. Frankie had gone ahead to the cabin, hoping to get a fire started or find a telephone.

Lou helped Lane out of the plane, leaving Lady Margaret for William.

“Let me help you,” he insisted. “I know you didn’t need my help getting into the plane, but this is non-negotiable.”

She didn’t even try to turn him down.

The feel of her hand wrapped in his larger one unsettled him. Something seemed familiar about it, though he had no idea what. He’d never even heard of the woman until a few months earlier when dancing with a friend’s wife. Jonathan Langley-Cranston had taken Kenzie to a Mevendian wool festival earlier in the day, and she had gushed about the whole thing, including Lady Margaret. He’d never met the elderly woman until the other day.

Once on the ground, Lou led them around the tail section of the plane. In the distance, they could see lights. That’s where they headed, snow and cold seeping into their very bones. None of them were dressed for knee-deep snow.

Long minutes later, they reached the cabin. The rush was beginning to abate and William knew the adrenaline crash was coming. The aches and pains he’d been able to push past were about to come rushing to the forefront. He kept a grip on Lady Margaret’s left hand with his while his right arm went around her back to help her up the slick stairs to the porch.

But when they reached the top step, his ankle gave away.

Lady Margaret stumbled backward, falling into the snow drift. William crumbled where he’d stood and looked helplessly up at Lou and Frankie.

AH! Now what indeed! :D And it’s a romance right?! (This is the InspyRomance blog after all!) So where’s his heroine?!

You can find out all of that – and so much more when Reclaiming Hearts releases April 21! You can preorder here! It’s only .99 to preorder for a limited time! 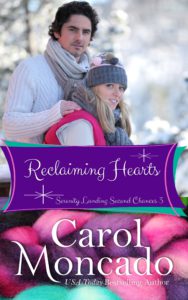 All of the next generation of royals from the Commonwealth of Belles Montagnes have found love.

Crown Prince William of Mevendia has done an exceptional job of keeping his private life out of the public eye. It’s been half a decade since he was last romantically linked with anyone, and even then, no one actually knew who she was.

Margaretha Delatreaux had once fancied herself in love with a prince. Maybe she still did. Promises broken still cause her heart to ache, and she longs to repair the damage the last words they’d flung at each other had done.

After a chance encounter, a life or death situation, a foreign country, and unflattering press, just maybe they’ll have a second chance at reclaiming hearts.