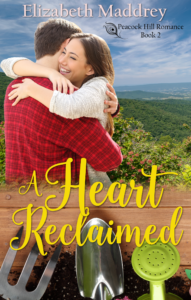 I’m going to be honest, blogging about A Heart Reclaimed right now is not really what I’d like to be doing. It’s not the story — I’m excited about the story finally making its way into your hands! No, the problem is that it’s not going to be out until probably the first week of July.

And thinking about that is what tipped off a conversation in my head that went something like this:

“I need to blog on InspyRomance again…what should I post about? I could revisit an older book, maybe do a spotlight of sorts on that…or think up some kind of devotional thought, I haven’t done one of those in a while…or…A Heart Relcaimed? No, Cherish isn’t coming out until either the last day of June or early July. I’ll post about it in July. When do I blog in July?”

At this point, I wandered off to consult the calendar to see when that date was. I…don’t blog until practically the end of July. I’m not promising I won’t blog about A Heart Reclaimed then, too, but it made me think that maybe, just maybe, it was worth going ahead and using my June spot to talk about it too.

A Heart Reclaimed is book two in my Peacock Hill Romance series. Book one, A Heart Restored, came out in March as part of the Love at First Laugh box set. Right now, that box is tied up in Kindle Unlimited (KU), which means that the book is only available on Amazon and I can’t release the novella on its own until that’s done. (Which I think, at this point, is going to be in September.) When I made the decision to start a series in a box that I knew would be in KU, I figured that it wouldnt’ be a horrible idea to go ahead and do book two in the same thing.

And so it is that A Heart Reclaimed will release as part of the Cherish box set in late June/early July. This box will also be in Kindle Unlimited for a time (many apologies to those of you who aren’t Kindle format readers! I’ll be taking the series wide as soon as the boxes are out of their KU enrollments. Promise.)

This second book is a full-length novel (book one was a novella) that picks up on the heels of book one and continues the story from there. So if you already met Deidre and Jeremiah and want to know more about them, fear not! They’re hanging out with Duncan and Anna at Peacock Hill as the big restoration project continues. 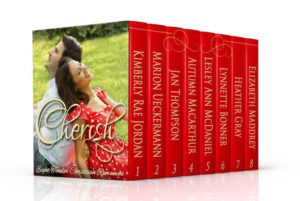 Cherish isn’t on pre-order yet (and it may not be, that’s something we’re still discussing. It may end up simply being released into the wild as soon as it’s ready), so I don’t have any links that I can give you, but if you keep an eye out here (several of the other Cherish authors also blog on InspyRomance and I’m sure you’ll see more as we get closer) or on my Facebook page or if you sign up for my newsletter then you’ll get those links as soon as they’re available.

In the mean time, I’ll leave you with the blurb for A Heart Reclaimed:

She claimed his heart in college. Can she reclaim it at Peacock Hill?

Duncan McIntyre is grateful to spend time away from his job at a prestigious D.C. landscaping firm to help his sister in southern Virginia. Restoring the grounds of Peacock Hill to their former glory is just the sort of challenge he’s been looking for.

Anna Hamilton wants to get out from behind the reference desk at the library and use the landscaping degree she worked so hard to earn ten years ago. When she’s invited to consult at Peacock Hill, she thinks it’s the answer to her prayers. Until she realizes Duncan McIntyre, the guy who drowned out all her opinions on team projects in college, is in charge.

Determined to stick it out and add Peacock Hill to her resumé, Anna and Duncan work together to reclaim the grounds from years of neglect. Will the garden they plant blossom into love?

Are there any books coming out this summer that you’re looking forward to? Share them with us in the comments!