Have you ever compared yourself to other people then felt inadequate or second-best?

I admit I have! far too many times than I should.

Other girls at school, from the more popular ones to the ones who had the coveted 36 color pencil set in the metal box to the ones who could speak and sing in front of the class and weren’t so painfully shy.

Then there was my sister, so much prettier than me with beautiful long hair.  So much more talented at things I had zero talent for, but wished I did. (Of course, I discovered when we’d both grown up that she compared herself to me and felt bad about herself right back for a whole different set of things!)

As a preteen and teen, comparing myself went into overdrive. Who was prettier? (Nearly everyone – I had terrible spots!). Who had more friends? Who did the boy I was crushing on like better than me? Becoming a Christian didn’t change the comparisons, just changed the things I compared. Who had read more of the Bible? Who was the better witness? Which camp counselors brought more of their cabins to know Christ?

Unfortunately, though I grew out of the spots, I didn’t grow out of the comparing! Hopefully though, I’m doing it differently now. 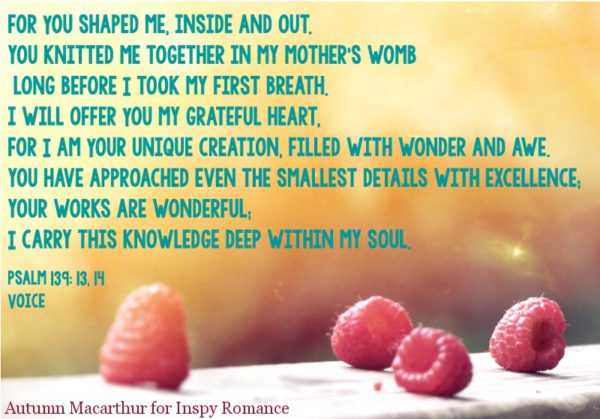 But if we’re not careful, comparing and judging ourselves as less than others as can lead to giving up,  jealousy, or despair. Judging ourselves based on other women’s seemingly perfect lives and homes and families on Facebook or Pinterest, especially! Or we may start  thinking how well we’re doing compared to others, opening the doors to the other wicked stepsisters in this family, pride and complacency.

Not what God intends for us!

Samantha Rose, the heroine of the book I’ve just finished writing, has a big issue with comparisons. All her life, she’s compared herself to her mother and sister, both gifted homemakers and Proverbs 31 women. Unlike her. She’s given up on trying to cook or keep house. That’s why God invented pizza places, right? And her untidiness is a sign of a busy person, that’s all. A tomboy like her working in IT doesn’t need to know how to be a homemaker.

Until she’s forced into it when she agrees to care for her sister’s five-year-old twins for the summer!

Suddenly, she needs a crash course in cooking. But even more than she needs to learn to keep a tidy house and prepare meals, Sam needs to learn that God has given us different gifts and talents, for His own purposes. She isn’t less-than because she has a talent in one area but not in others. In His eyes, we’re all equal. Equally valued, equally loved. Different parts of the same body.

She needs to learn what being a real Proverbs 31 woman is: A woman who says “Yes” to God.

Any time we find ourselves comparing and feeling bad about ourselves, we can hand those feelings of inadequacy over to Him, trusting that He does have a loving plan and purpose for every single one of us. He created us as we are for a reason.

For You shaped me, inside and out.
You knitted me together in my mother’s womb long before I took my first breath.
I will offer You my grateful heart, for I am Your unique creation, filled with wonder and awe.
You have approached even the smallest details with excellence.
Your works are wonderful; I carry this knowledge deep within my soul. 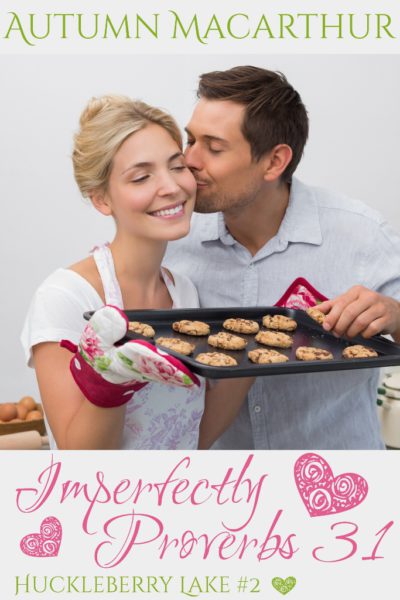 To help her archaeologist sister, geeky Samantha Rose agrees to swap her black T-shirts and diet of pizza and ice-cream for a pretty apron and a summer caring for her adorable twin nieces and their newfoundland dog in Huckleberry Lake, Idaho. How hard can it be?

But when Perfectly Proverbs 31, the homemaker blog she starts to reassure her sister, goes viral and everyone believes it’s real, Sam needs to reluctantly keep up the pretense. If she doesn’t, she risks ruining everyone’s summer. The girls’ over-protective grandma will surely to swoop in to take the girls.

Forced by his boss to interview Sam then take a vacation, a month at the lake with nothing to do but write a fluff piece is burned-out city crime journalist Daniel Novak’s worst nightmare. But he finds her surprising and delightful, as her attempts to impress him with a picnic go horribly wrong. Time with Sam could restore his lost faith in people — and in God.

Can Ms Klutz-in-the-Kitchen transform herself to a Proverbs 31 woman in time to stop him revealing the truth about her blog? And what will happen to their growing love if he does?

I don’t have a buy link yet, but the story will be published in early July as part of a lovely new boxed set, Picnics & Promises. With stories from Marion Ueckermann, Jan Elder, Cecelia Dowdy, Claire Revell and Mary Manners, it’s a must read! Here’s the gorgeous cover Marion made. To be notified when the set launches (with a 99c release week price!), sign up for my newsletter, or follow me on either Amazon or BookBub. 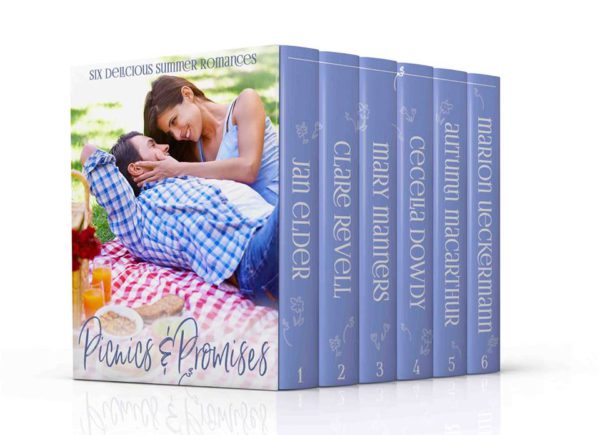 Have you had a problem with comparing yourself to others? Or just want to say Hi? All comments on this post before midnight July 4, will go in the draw for a free ebook copy of Imperfectly Proverbs 31!