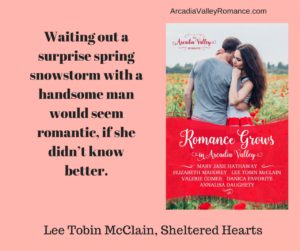 Are you getting the picture? Opposites and contrasts make the world go round in romance. The more contrasts I dream up for my books, the more fun they are to write… and ideally, to read! 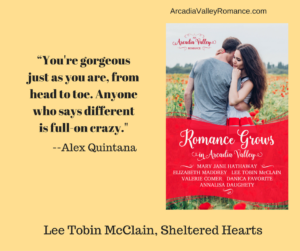 The novella I’ve written for Romance Grows in Arcadia Valley is full of contrasts, including all those at the top of this post. And yummy food. And of course, there’s a dog! Here’s how the book starts:

Alex Quintana finished mopping the red tile floor of his family’s restaurant. The late-evening silence eased the knots in his shoulders and calmed his worries.

A freak March snowstorm had made his sister and the cooks nervous, so he’d happily agreed to stay and close.

It wasn’t like he had someone waiting for him at home.

A thumping sound broke the silence. Probably a truck with chains driving by, though surely the snow wasn’t that bad.

He put away the mop and emptied the dirty water, then looked with satisfaction around the neat kitchen. That hadn’t taken too long. Next, he walked out to the arched doorway between the two small dining rooms, making sure everything was clean there, as well. It had to be, for his abuela’s 80th birthday party tomorrow.

Thump. Thump. Thump. It sounded like someone was knocking on the front door, pounding on it, really. But who?

He opened the door, and a gust of cold wind swept in. He peered at the woman who stood outside, arms wrapped around herself, barely visible in the blowing snow. Man, that had gotten deep fast. The whole world was white.

Below, he heard a whine and looked down. A dog? Tall, white and curly-haired, maybe a poodle, trying to push its way inside.

Alex shifted to usher them inside. But, wait. The last three out-of-town women who’d showed up at the restaurant had been gold diggers. Was this woman another one? He stopped, blocking the door with his body, and studied her.

She’d brought a dog and arrived in a snowstorm. Creative, at least. “Sure,” he said with a sigh and stood back, making room for the woman and dog to enter.

He pushed the door closed against the wind and then turned to her. Red, wavy hair down past her shoulders, strong cheekbones, and big bluish-green eyes. Okay, a knockout, but still. “This wasn’t the night to come out. How’d you know I was here?”

She didn’t answer and he saw that her hands were red and bare as she knelt and ran them over her dog, brushing the snow off of him. Her teeth chattered when she looked up. “Do you happen to have a towel?”

“Bring him back here. It’s warmer.” Even if she was out to take advantage, he couldn’t turn away a freezing woman and animal. He put a hand on the small of her back to guide her toward the kitchen. She pulled away.

But not too soon that he didn’t get a whiff of the vanilla scent of her hair.

“We can dry off your dog. Get you both something to drink.” He filled a bowl for the dog and put water in a kettle for tea. “Here, take off your coat. It looks soaked.”

She glanced up at him, her eyes guarded, and then unzipped her jacket and handed it to him. He couldn’t help but notice her amazing figure, just before he quickly turned away to hang up her coat. “Do you want my jacket to wrap around you until you warm up?”

“No, it’s okay,” she said. “That’s your coat. You’re closed. I wouldn’t have come here at all, but I was trying to get off the interstate and the back roads weren’t plowed. My car slid into a ditch.”

“About a mile. And the car is way stuck.”

“You walked a mile in this.”

“Yes, and Bear’s paw is hurt. I saw blood in the snow.” She knelt beside the dog again, biting her lip.

“That dog’s name is Bear?” It looked more like a giant, groomed mop. He’d have guessed a name like Fifi.

She grimaced. “His real name is Barrington. It seemed too pretentious for a dog, so I nicknamed him Bear.”

What are your favorite opposites in a romance novel? Boss-Secretary? Rich dude and Cinderella? Bad boy/good girl? Enemies to lovers? Beauty and the Beast? Something else? Comment by midnight January 10th for a chance to win a $5 Amazon gift card. I know, it’s not much, but… it’ll buy you the Romance Grows in Arcadia Valley collection, which is only 99 cents, and another book of your choice as welll!