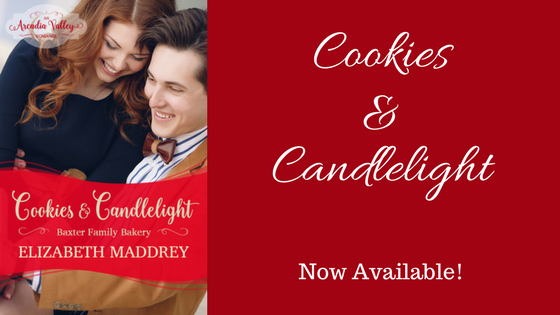 Last month, I gave you the back cover and an excerpt of my new release, Cookies & Candlelight. Since my posting dates sandwiched the September 12th release date for my novel, I figured I’d take one more opportunity to talk to you about it. This month, I invited Serena Johnson (the heroine) to come to the blog to talk to you a little about herself.

EM: Hi Serena, thanks for taking time out to come and chat.

Serena: No problem. Thanks for having me. I’ll admit, it’s a little weird doing an interview again. I haven’t done one in quite a while.

EM: You’ve done interviews about your pottery in the past?

Serena: Oh, no. Well, a few online, I guess, but not generally. I meant from when I was an actress.

Serena: Ah, I kind of keep it quiet, so I guess it’s reasonable you didn’t know. I grew up in Hollywood — literally on screen. My parents are both actors, my grandparents are actors…it’s kind of the family business. About five years ago, I needed a change. A big one. So I came to Arcadia Valley and set up shop as a potter.

Serena: Now and again, but not usually. I get a lot of “Oh, you look sort of like that actress, what’s her name?” Most of the time, people go on to say that she’s pretty, so that’s nice, at least. Of course, since I disappeared from acting, there are a handful of rather hilarious conspiracy theories about where I’ve gone. But honestly? People don’t even recognize my parents most of the time if they’re not made up. You’d be surprised at how many times you’ve probably walked past someone famous without doing more than a double take and wondering for a second.

EM: You say that like it’s a good thing.

Serena, chuckling: Well, I think it is. We’re just people, you know? It’s nice to have a personal life.

EM: Let’s talk about that personal life, shall we? You’re a potter. Anyone special?

Serena: Nope. I’m not really looking. I…have a bit of a past, I guess. I only came to know Jesus after moving here to Arcadia Valley, so I lived like you’d expect a teen star to live. It took me a while to forgive myself for that and see it as part of the journey that brought me to God. So I figure if there’s someone out there for me, God will make it clear.

Serena: Sure. Oh, hey — can we wrap this up? I’ve actually got a kiln opening happening soon and they’re supposed to be delivering some treats from the bakery any minute.

EM: Is that Demi’s Delights or A Slice of Heaven?

Serena: A Slice of Heaven. My friend Gloria says the Baxters know what they’re doing in the kitchen. Last time I opened a few packages of Oreos and called it a day. I was told that wasn’t going to cut it.

EM: I can see that. Kiln openings are usually a little fancier than that.

Serena: I guess. I avoid them when I can. Most of my business is online and I’m really okay with that. Oh, hey, that’s the doorbell.

EM: I’ll let you go. Enjoy the opening, and thanks again for taking the time to talk to us.

If you haven’t read Cookies & Candlelight yet, but you’d like to — leave a comment and I’ll giveaway two e-books (through Amazon.com). I’ll pull winners tomorrow after 5 p.m. Eastern.