When I first started writing what came to be The Courage Series, I did not envision three books.  In fact, my working definition of “courage” at the time pretty much amounted to what we all think of it being–namely being willing to race into burning buildings to save lives.

What’s been interesting to me, first in writing the three books and now in releasing them, is the realization of the many facets that basic word took on in the course of these three books.  The first book, “To Protect & Serve” examines courage from the standpoint of not just racing into burning buildings but also in loving someone who does.

Jeff is the fireman; Lisa is his new girlfriend.  To be honest with you, I’m not sure which one has to have more courage because every fire, every call-out is a jump into the complete unknown for both of them.  Left behind to wait and hope and pray, Lisa has to have a courage that most people will never understand and never have to find on a day-to-day basis.

You see, most of us who experience danger do so intermittently.  These men and their families do it daily.  I don’t think I appreciated that until this book.

In the second book “White Knight,” Eve Knox is facing a quieter reason to have and display courage.  She has lost her husband, the love of her life, and at the tender age of 28, she has given up on life.  Her worried friends try to help, but the help feels more like smothering.  And so she has to reach for the courage to continue to live despite enormous heartache.

I think this is the kind of courage more people than we really realize are relying on.  It’s the courage of the mother whose son is in trouble, the courage of the father who is not sure how long his job might last, the courage of the person who has lost someone near and dear to them, who honestly would prefer to give up but who keeps their own sorrow under wraps so as not to worry everyone else.  It’s a quiet courage. 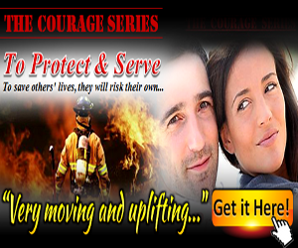 And then we come to the third book in the trilogy, the one that fascinates me almost as much as the others due to the reaction of my readers.  This book, “For Real” doesn’t have burning buildings or wrecks on the freeway.  Instead, the desperation is hidden–for both main characters.

First you have Blaine Donovan, who has worn his game face against the world so long, he thinks it’s really him.  He’s forgotten how to be him if he ever really knew.  And then there’s Melody Todd, hurting because she feels she can never measure up to the thin, beautiful women of the world.  She can’t be “For Real” because she’s convinced no one already likes her, if she was for real, they would hate her completely.

The courage demonstrated in this book is demanded of every single character we’ve met so far.  It’s the courage to stop judging others, to accept them, but most of all to love them.  It is the courage that could change the world if we would all learn to reach for it, to display it, and to live it.