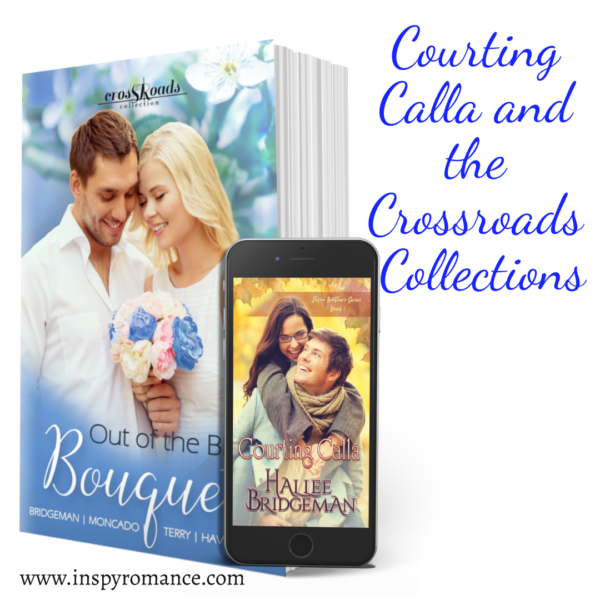 About 18 months ago, I was approached by an author friend, Amanda Tru, to be part of a box set that was a little different than the standard box sets. This one would have a common theme running through it and the final book would tie all of the other books together.  Amanda named the series Crossroads Collections, and Out of the Blue Bouquet Box Set was created. In this collection, every book had to have something to do with a misdelivered flower delivery.

It was very easy to decide what to write about. I was in the process of planning my Dixon Brothers series. My Dixon brothers are identical triplets who own a major construction company in Atlanta, Georgia. I have plans to write a book for each brother (and am currently finishing the one for the first brother), and thought I’d write a novella introducing the series using some peripheral characters.

Calla Vaughn is a file clerk at Dixon Architectural and Contracting Services and is drowning under a sea of debt due to someone close to her stealing her identity. She’s had to quit culinary school, sell (almost) everything that matters to her, and work and work to try to get out of this debt. One day, her car that should have died years before finally gave out — right in the entrance of the Dixon parking garage. Blocking all of the lunch traffic coming back into the garage, overwhelmed, and at the END of her rope, Samuel “Ian” Jones helps push her car out of the way. She is mortified, in tears, and so embarrassed – made worse by the fact that she has had a crush on mechanical engineer Ian since the week she started working there. Then, when she’s wishing the ground would just open up and swallow her whole, her best friend, Sami Jones, swoops in to the rescue. She promises Calla she’ll handle the car, get it towed, and offers to buy her dinner on her way home that night.

A little while later, Calla hears a contest on the radio to win a bouquet of flowers and dials the number – becoming the winner! Knowing how much Sami has done for her and would do for her that evening, she sends Sami flowers with the card saying:

Can’t thank you enough for yesterday. You were a lifesaver. Dinner at my place. Six tomorrow night. Won’t take no for an answer. Want to thank you properly. Calla

Well, as you can imagine, the flowers are not delivered to Sami Jones, but to (Samuel) Ian Jones. He is confused, intrigued, and just attracted to her enough to take her up on her offer of dinner.

Everything goes well until he discovers her secret – but only after it’s been too long into their relationship, and only after the police arrest her.

This was so much fun to write, because I was able to include conversations with Amanda’s characters at the flower shop. That was the first Crossroads book, and since then there have been three more, and two more are being planned. I was also in the Yesterday’s Mail Collection, which all had to do with misdelivered mail and the final book written by Amanda was about the postal employee who found all this missing mail. Readers love the idea of the books all tying together that way. Recently, our own Carol Moncado wrote about the latest Crossroads book, Betwixt Two Hearts on this blog post.

It really is a fun series to be part of.

I’m excited because Out of the Blue Bouquet authors have just been allowed to release our individual books! So, Courting Calla officially published on Valentine’s Day! You can read more about it on my website at this link. In the meantime, check out our birthday bash prizes — I’m giving away a paperback copy of Out of the Blue Bouquet!  You want to make sure you can enter all the ways you can enter so that you have a chance to win this collection.