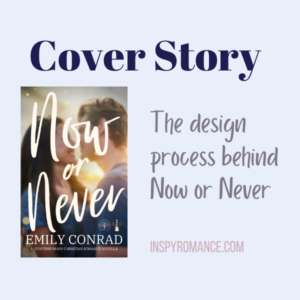 Should a writer dare to create their own covers? You be the judge!

However, not all writers work with a designer. Many brave and multi-talented writers create their own covers, including a number of Inspy Romance authors—and these covers are so good! See for yourself! 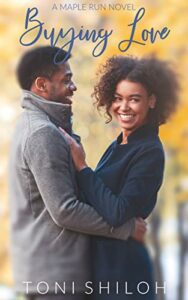 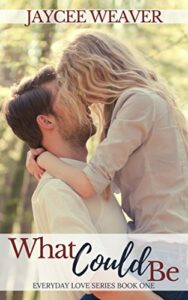 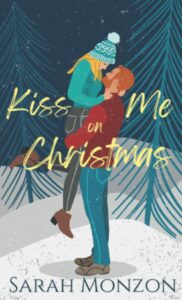 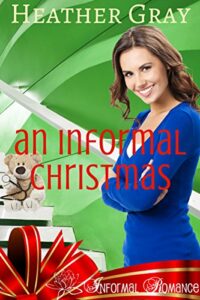 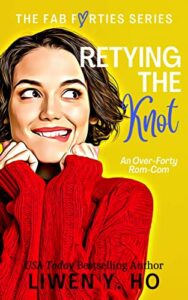 Informed by the process of working with a designer and inspired by the lovely work I saw other authors creating, I decided that with my next release, I would do my own cover design.

Now or Never is a novella that bridges my last series (the Rhythms of Redemption Romances) to my next (The Many Oaks Romances).

I prefer covers with people on them, and they’re one of the popular options in my genre. Since the Rhythms of Redemption Romances all featured photos of people, I figured continuing that would help the new books look like Emily Conrad books.

Unfortunately, I hadn’t made that terribly easy on myself. Now or Never features characters who are around age 50, and the hero is blond. Do you know how hard it is to find a 50-something blond man in a romantic pose on stock photo sites?

Eventually, I found a couple that I thought could work, and I started playing around with variations. Note: the man isn’t blond… 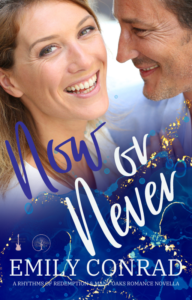 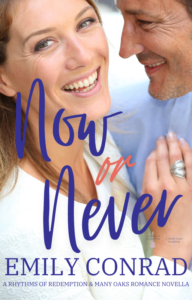 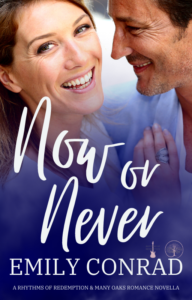 I ran these covers by my writing friends, and the last one got the most votes.

But I didn’t feel that sense of wonder I’d hoped for.

I decided to attempt a different cover style. Could I get away with an illustrated cover? Turns out, even among the illustrated men, blonds are a rarity! I had to finagle an image of blond hair over the top of the illustrated guy’s brown hair, but in the end, I think it worked, and I LOVE this cover. Unfortunately… 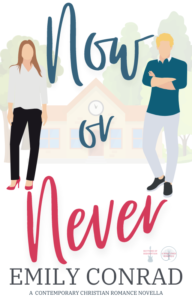 It looks like it belongs on a romantic comedy. If you’ve read any of my books, you might know that’s not usually what I write. While Now or Never is on the lighter side of what I write, it’s still not a romantic comedy, and I didn’t want to lure readers in with a false promise.

I went back to the drawing board. What about if I used a scene instead of people?

The next front runner was this cover. I liked the bokeh effect (the soft focus), and the vague impression of a couple in what could be a restaurant or music venue, which fits the story. 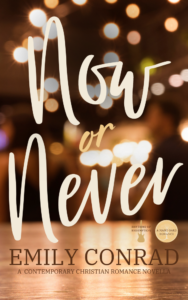 I was just afraid it didn’t exactly scream romance.

I tried a couple of other setting covers before inspiration hit.

If I used an out-of-focus shot, as in the cover above, it wouldn’t matter if the couple wasn’t quite the right age. In Canva, I could blur any photo and overlay lights to create a bokeh-like effect. You can bet there was more trial and error, but I finally landed on a cover that I felt matched the story, screamed romance, and gave me that elusive sense of wonder.

Allow me to present Now or Never‘s final cover: 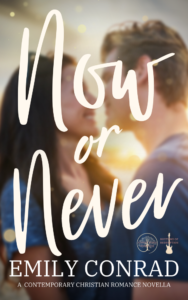 Will leaving positive legacies mean kissing their own happily-ever-after goodbye?
If Tim Bergeron got a lifetime achievement award for anything, it’d be managing the iconic rock band, Awestruck, but he’d trade his successful career for the opportunity to prevent his daughter from repeating his mistakes.

When a health scare proves time is short, he talks Isabella into a cross-country road trip. His attempts to talk her out of a hasty marriage drive a wedge between them, and it looks like the best he can hope for from the trip is scouting out promising new talent to represent. That is, until he meets Gabby.

Widow Gabrielle Voss has responsibilities to her daughter and patients, deep roots in the community, and a dream that scares her. Though she’d never utter it to the people she lives and works among, the truth slips out with Tim, who’s not in Many Oaks, Iowa, to stay.

As her fiftieth birthday party draws near and an attraction to Tim sparks to life, Gabby realizes she must pursue her dream now—or, more reasonably, never.

You can pre-order Now or Never today!

Tell us about a book cover that struck you as particularly engaging! What did you like about it?