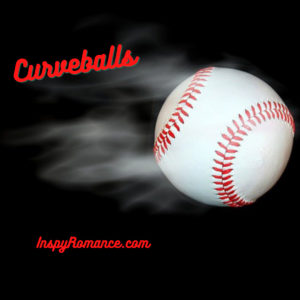 When it comes to romance, it sure comes with twists and turns. When I read, that’s what I’m looking for.  The unexpected. I call them curveballs. When it comes to life in general, we sure endure our share. I mean, look at 2020. That’s been a huge curveball, right?

I thought I’d share some of my own romantic curveballs.

-A college boyfriend just up and left without saying goodbye. My mom was certain his feelings were stronger than mine and didn’t know how to say goodbye when he transferred to another college. Whatever the case, he returned during a break nine months later and wanted to pick up. I was not a Christian and my attention was already elsewhere. When he asked for my number, I hesitated when it came to giving him the correct numbers. He asked, “You don’t want me to call you, do you?” And with that, I did not hesitate. I said no.

-Once I became a Christian, there was a group of people suggesting I get together with a fellow single Christian. Looking back, it’s all we had in common, but as a newbie, I thought the power of suggestion equaled God’s will. I was certain this relationship was meant to be. Even when as a friend he was kind enough to tell me he was moving. To Russia. To be a missionary. As I pined away still believing this was God’s will, I later learned his missionary assignment was in jeopardy when he fell in love with his translator. To my knowledge, they remain married.

-While at a wedding, I caught the bouquet. My now-husband walked into my life three months after that reception.

-I knew my husband’s family long before I had met him. The first time we met was during a large gathering and he left me less than impressed. The “real” time was when I was running late from a church event to meet his family to show cruise pictures. I was so late they all left, everyone but Tom and his children. I stayed three hours.

-When we were engaged, we lived a good 90 minutes apart. He was going to start a new business in our hometown that would bring us closer. I am famous for freaking out when things are close to finally happening. Sure enough, two weeks before he moved, I sent him an email and broke up with him. It was too much, the distance. He never got the email. When I brought it up, he talked me through it and I agreed it was fear that sent the email, and God was why Tom never received it!

Those were unexpected situations that were both humorous and hard. As a romance author, I have to admit curveballs happen while writing. In Entrusted, there was a secondary character I just adored and I realized one day he needed to die. It moved the story forward, provided a way to wrap up the story and even gave the genesis to start a second book, something I never imagined doing. Last year I was down and out on the cough with bronchitis, a sinus infection, and adrenal fatigue. Writing new material? I couldn’t. I didn’t have it in me. But I could go back to an old manuscript and revise it. My first romance as a new Christian, written in 1994, was ready to publish in 2019. I never pictured publishing Match Made in Heaven. Yet I’ve received such great feedback regarding it.

Last month God blessed me with a few curveballs regarding my new series and the first book, Anchored. I was on a beach enjoying the choppy waters, daydreaming, when my mind drifted to the series. I’ve been calling it the Surrendering Opinions series because I knew it was about the Collins sextuplets and how the community helped raise them after a tragedy. Now adults, they are each trying to find their own identity and a love like the one their parents shared. The trouble is, they face challenges from loved ones who feel they have a say because they helped the family. It made sense.

Until God nudged me. Each book is a romance with a surrender issue. With a larger group of people with such passion for this family and their well-being, the characters are surrendering hearts.

With six books, I have a lot of gaps to fill, but they are coming together. I have a team that prays for me. I pray. I take notes. I daydream.

I also catch curveballs. How about you? What curveballs have you dealt with?