On Monday, we called an online service that helps you sign up for health insurance. I expected it to take half an hour, but the call lasted almost three hours! I was amazed by the young man who helped us – in spite of the length of the call, he remained courteous and polite and friendly. After the call ended, I got an email from the company, asking me to rate his customer service skills. I could easily say that it was the best customer service I’ve ever experienced!
The next step in this ordeal was notifying our current insurance company that we wished to cancel.  I wasn’t surprised when I landed on hold, but I was annoyed by their choice of background ‘music.’ For fifteen long minutes, I had no choice but to listen to it because every minute or two, a soft voice came on the line. It was only a recording to inform me that I must continue to wait, but I couldn’t know that without increasing the volume. Thus I couldn’t read while I waited, or write this blog, or even pray for anything other than my sanity! As luck would have it, the rep who finally took the call was cross and impatient. Though I have worked with the public and know what a difficult job it can be, I treated her as she treated me. I regretted my non-Christian attitude as soon as the call ended, but not enough to call back and wait another fifteen minutes on hold so I could apologize! 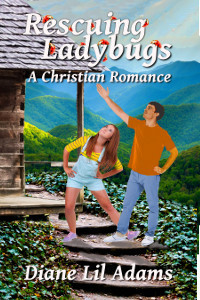 Jason Lancaster reluctantly agrees to fill in for a friend who owns a pesticide company. When the homeowner pleads on behalf of the ladybugs, he feels like a serial killer. Customer service comes natural to Jason though, and it’s especially easy when the customer is as cute as Maura Blaine. He’d like to see her stay on in Smoky Valley so they can get better acquainted and he can figure out whether she’s ‘the one.’
Maura is drawn to Jason the minute they meet. She was only planning to stay in the mountains for a few days, but maybe she should consider Jason’s suggestion and postpone selling the cabin she inherited. She’s intrigued by Jason’s love of the Lord and wants to know more … until he suggests that she forgive her father.

Jason believes in treating others with kindness and courtesy in any and all circumstances, and it paid off when Maura came to town. Sometimes I need to take a lesson from my own characters!