Hello, Jolene Navarro checking in from the Texas Hill Country. I have a confession to make. I had a dream for most of my life that I thought was out of my reach.  I’ve had many dreams, and some I just out grew, but that one stayed with me through all my phases of growing up as a young wife, new mother. Life got busy as my four kids stayed on the go.

I dreamed of writing stories that would be published and sit on book store shelves.

I dreamed of doing book signings and getting letters from people I didn’t know, telling me how much the characters I created touch them. The way so many stories touched my heart.

I had a strong imagination. Many of the notes home from my teachers were how I was not meeting my potential; I spent too much time daydreaming. One teacher was worried about me because I seemed to be marching to a different drum beat than the other kids in my class.

The reason I thought the dream was out of reach is that I could not spell to save my life, and it was not from the lack of trying or studying. Don’t tell anyone, but by the sixth grade, I learned to cheat on my spelling test so I would not be grounded. It was not a lack of studying. I would fail tests even though I had the right answers because many of my teachers believed “if it was spelled wrong it did not count.” I worked hard but was accused of being lazy. There was no way I could be a writer.

I hesitated to go to college, all I could see was more humiliation, so I went to Art School in Houston. As I moved through life, raising my family, one thing never changed.

It was the stories in my head. I had developed characters that were always with me, but I never told anyone about them. I went to sleep telling myself stories.

Fast forward a bit. As a young wife and mother, I did end up going back to school. I was diagnosed with dysgraphia. It is the other side of dyslexia. I usually just say I’m dyslexic because most people are familiar. Kind of like telling people I’m from San Antonio because most people outside of Texas have not heard of Boerne.

Dysgraphia is a decoding issue also but works on the output. Spelling, pronunciation, handwriting, and flow of language are some of the struggles. I went onto graduate with honors. My Masters is in Education with a specialization in reading and spec. ed.  About the same time this happened, I was approaching forty, my oldest of the four children was about to graduate from high school and I had lost both parents suddenly and unexpectedly. I had a strong sense of time running out.

The one dream that still burned within me was being a published writer. As I heard the clock ticking, I knew I would have to take a risk, to put myself out there to be humiliated if I wanted to find out if I could succeed.

Being writer seemed to be out of reach, something that other people did. There will be people telling you that you’re not good enough or you need to be realistic and do something else. A career full of rejection.

You can get help, go to workshops, even get a mentor or surround yourself with other writers, but eventually, you have to step out alone and jump.  You have to trust God and put your heart out there.

Sometimes you will crash, sometimes you might stick the landing, but there will still be people still tell you it’s not enough. That you’re not enough. Persistence is the key to making your dreams become reality.

I got to see my first book on the shelf October 2013. I have had seven out since then.

I love writing characters that have dreams they don’t think will happen for them.

In my August release Texas Daddy, Adrian gave up his dreams to raise his daughter, then he meets Nikki. She is back in town to heal and try to save the dreams she had. They discover when they trust God, the real dreams of their heart can come true. Right now you can get the ebook for 1.99  across all platforms or a print book for about 5.00 depending on retail. Harlequin has all the buy link so just click on the book cover and you will find them. 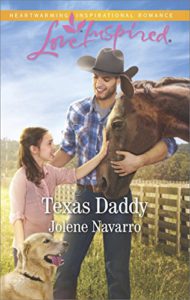 Do you have a dream that you have been hesitant to pursue?  Leap people, find the thing you love and fly!