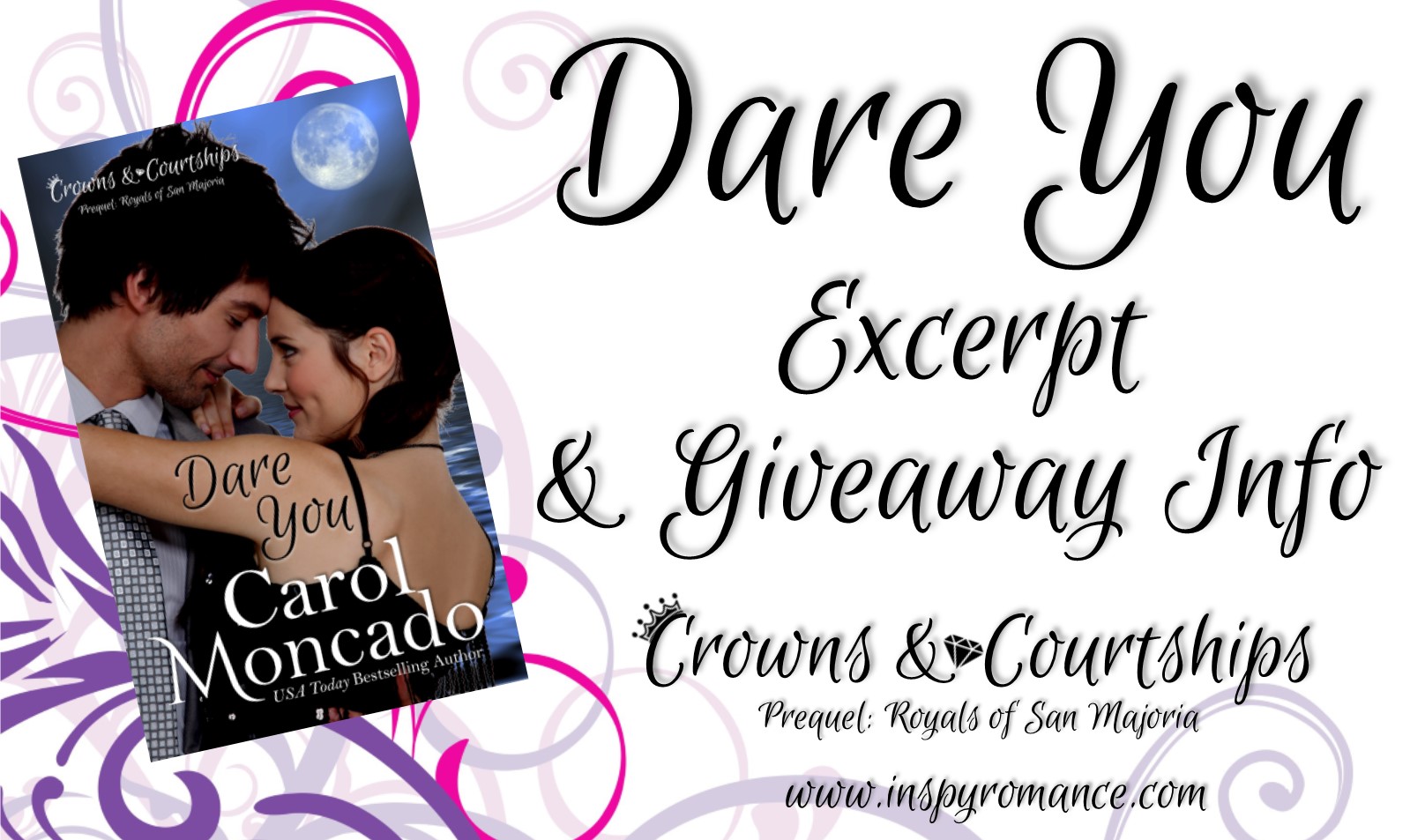 Hello out there in InspyLand! I hope you’re all doing well!

I’m super excited! I just finished up the series Serenity Landing Second Chances, with Reclaiming Hearts! It’s the last book related to the royal families in the Commonwealth of Belles Montagnes countries of Montevaro, Mevendia, and Ravenzario. Prince William finally finds his princess! And all of the next generation of royals have found love – along with a twin brother and the guy who dated all three of the heroines from Montevaro ;). So that area’s all wrapped up.

But that means it’s time for a new series! As y’all probably know, all of my books are set in the same “universe” which means some of these new characters and places have already been introduced, at least a little bit. In contemplating the new series, I decided to go with an overarching series title that can basically go on forever if I wanted it to. So Crowns & Courtships is born! Each book will have a series subtitle telling readers which country is involved (or countries if that happens). So the next book will be Heart of a Prince, which is Crowns & Courtships, Book 1: Royals of San Majoria.

Dare You is the prequel to the new series! Some of you may have already snagged it as part of a giveaway I was a part of, but if not, make sure you’re signed up for my newsletter – everyone who is will have a chance to grab it for free before it releases on Amazon in preparation for book 1. Dare and Betsy aren’t royals, but some old friends from Montevaro do make an appearance or two ;). (Plus I LOVE the cover!) And it directly leads into Heart of a Prince which will also release this summer. For those of you who are familiar with the series, Reclaiming Hearts takes place winter 2017-18, but Dare You and Heart of a Prince jump back in time a bit to summer 2017. Book 2 will catch up to the end of Reclaiming Hearts.

If you’ve never read one of my books, this is a great time to start! Because it’s a new series, there’s less backstory to catch up on (though I try to make sure each book can mostly stand alone anyway). I’d love to have you try it out!

Dare Weaver stepped out of the airport into the oppressive heat of a Southwest Missouri July. So very different from home.

But most places were warmer than New Maryland, New Brunswick had been when they left before dawn.

“Where do we catch the shuttle to Serenity Landing Resort?” The voice of his best friend’s sister drifted through the open door.

Betsy Haines was the catalyst behind this trip to the States. She had it in her head that a trip to Serenity Landing was a much closer way to have a chance to see a royal up close and personal. She’d somehow managed to find out that several members of European royalty would be in town for the Fourth of July.

He really didn’t know how she’d reserved a couple of rooms for such fabulous prices, especially with the exchange rates what they were – and public knowledge that several royal entourages would be in town, though not all of them would be staying at the resort.

Jordan, Dare’s best friend since first grade and Betsy’s brother, pointed to a sign. “I’m guessing we catch it over there.”

The three of them and Betsy’s friend, Laura, who rounded out their foursome, followed the arrows until they reached a line with several others from their flight waiting for the same shuttle.

“How can it be so hot this late at night?” Betsy wiped her forehead. “It’s after dark.”

One of the women who’d shared a row on the plane with him and Jordan turned. “Oh, honey. This is the Midwest. It’s the humidity that will get you every time.”

Betsy puffed her shirt in and out, in an effort to cool off Dare supposed. He couldn’t imagine it did much good.

Any further conversation was forestalled by the arrival of the shuttle. The driver opened the cargo storage underneath so they could all stash their luggage. Dare and Jordan took care of all of theirs while the girls climbed on board. The shuttle wasn’t nearly as full as he would have expected, but their flight had come in three hours later than originally scheduled. Maybe that was why.

Betsy and Laura spent the entire forty-five minute drive chatting with a couple of women on vacation from Minnesota. Both had grown up in the Serenity Landing area before moving away. They offered what Dare was certain were great tips about places to go in town. He was also fairly sure they didn’t know the best place to do anything really fun. Not the adventurous stuff he and Jordan would prefer.

But this trip wasn’t about him and Jordan.

It was about Betsy getting over her broken heart.

And Dare and Jordan not ending up in jail after a confrontation with the guy.

Though neither one of them had ever said it, they’d told her so.

And in the six months since the wedding was called off, planning this trip was the happiest he’d seen Betsy in a long time.

“What are you thinking?” Jordan’s quiet voice shook Dare out of his daze.

The one where he stared directly at Jordan’s younger sister. He sighed. “I’m thinking I like seeing this side of Betsy again.”

They sat in different rows, backs to the windows and facing the opposite side of the shuttle where they could keep an eye on their charges.

Betsy and Laura were grown women. In their twenties. But Dare knew Jordan took their safety personally, which meant Dare did, too.

Laura had turned around and was now talking to the young man sitting behind her. He’d shared a row with the girls on the flight from Canada. There had been way too much laughing for Jordan not to be a bit concerned. What did they know about this guy after all?

And they both had about the same chance at finding happiness with the girls across the bus as they did actually meeting one of those royals Betsy loved to cyber-stalk. Dare literally could not care less about any of them, unless it was Prince Richard from Montevaro. Dare had visited the Alpine country a few years earlier and had seen the prince on the slopes. The guy knew his way around a pair of skis and a double diamond run.

About the time Dare thought Jordan might interrupt Laura’s conversation, they pulled into the circle drive at the front of the resort. A line of bellhops waited to assist passengers as they disembarked the bus. The four of them, and the guy talking to Laura, waited until everyone else was off.

The five of them walked together to the front desk, the other man pulling his own suitcase behind him.

Betsy took over when it was their turn at the counter. She gave her information to the clerk and waited as he input the information.

“All right Ms. Haines, you and Ms. Perry are in room 10465 on the fourth floor in this building.” He handed over a small envelope with key cards in it. “Mr. Haines and Mr. Weaver are in room 12678, two buildings over.”

Jordan stepped up to the desk. “I’m sorry, but that won’t work. When we made the reservations, we were assured we would have adjoining rooms.”

“I’m sorry, sir. All of our adjoining rooms are already occupied.”

“On the same floor?”

The clerk did some looking on his computer. Dare rested his hand on Jordan’s shoulder. His friend was frustrated and would take it out on the clerk if he wasn’t careful.

Finally, the clerk shook his head. “I’m sorry, sir. We only have a few scattered rooms left at the moment. We are quite full this weekend.”

“I get that.” Jordan took another step forward, and Dare’s hand fell. “But we specifically requested it. We would have made reservations elsewhere, perhaps even another part of the States entirely, if we weren’t assured we would have adjoining rooms.”

A woman with a walkie-talkie in one hand walked up. “Is there something I can help you with, sir?”

Her name badge said manager. Before Jordan or Betsy could explain, the clerk did. The manager did some tapping on the keyboard then opened a drawer on the side. She pulled four tickets out and handed them to Betsy. “Why don’t you head into the restaurant and have a bite to eat or dessert on us while I see what I can do? I’ll find you in a few minutes. I’m certain we can work something out.”

Dare could see Jordan take a deep breath in and let it out slowly. But instead of saying anything, his friend turned and headed toward the restaurant on the other side of the lobby. He couldn’t have seen Laura exchanging phone numbers with the guy from the plane.

By the time she caught up, they were on their way to a table in the front section of the restaurant. Windows peered into the lobby, though not much could be seen between the potted ficus trees and other greenery.

Where was the waitress? He was hungry. 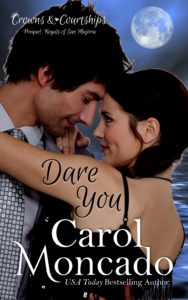 She needs a fake boyfriend. He’s just daring enough to try to turn it into something more.

Betsy Haines is running away from a broken heart, but when she – along with a friend, brother, and his best friend – arrive in Serenity Landing for the July 4 celebration, she finds herself the target of the affections of a creep.

Dare Weaver has been half in love with his best friend’s little sister for as long as he can remember. When she needs a pretend boyfriend, he’s only too happy to oblige. He finds himself daring to live up to his name – to try to turn something pretend into something permanent.

If you’re not already, be sure to sign up for my newsletter to get this free in a few weeks!