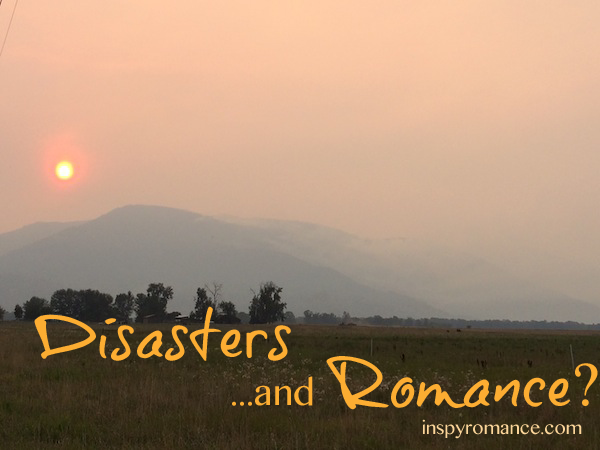 The view from my west-facing office window on August 23.

It’s hard to imagine anything LESS romantic than wildfires. All through British Columbia, Canada, and the Pacific Northwest, forest fires have been raging since early-to-mid August. Forests are tinder dry after a low snowfall winter and a low rainfall spring and, once the conflagrations began, they spread like… well, wildfire.

Where I live in southeastern BC, I can view two fires out my windows once darkness falls — unless the smoke occludes them, which is typically the case. We’re not far from the Parker Ridge fire in northern Idaho — that’s over ten square miles of fire that has closed the US-Canadian border at least once and caused evacuations in Idaho’s border town. On clearish days, I can see the smoke plumes, and once I saw flames at night. 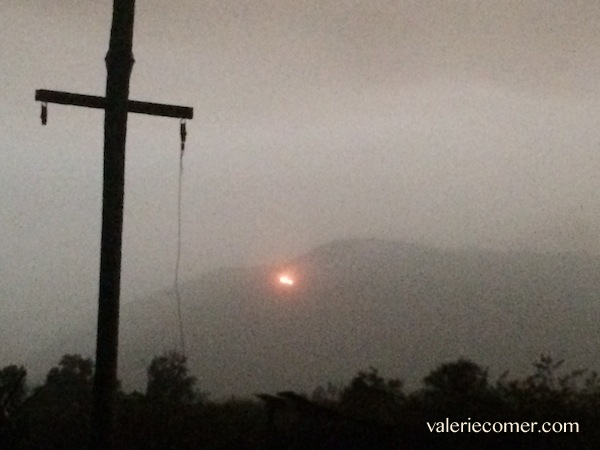 About 7pm on August 14, facing west from my yard.
(Excuse the former clothesline pole!)

Out my west windows I can see another fire only a few miles away. This one is about 1/10 the size of Parker Ridge and has been mostly contained in the past week, so flames aren’t usually visible anymore. Again, a heavy smoke haze means the view is often veiled.

Meanwhile new fires are popping up all around this huge area like a bad game of whack-a-mole. For every fire contained or extinguished, it seems several more explode onto the scene. Several fire fighters have died, uncountable properties have burned, and numerous towns are on what seems like permanent evacuation alerts or orders. For those of us lucky enough not to be under immediate threat, air quality is incredibly poor with thick smoke more days than not. 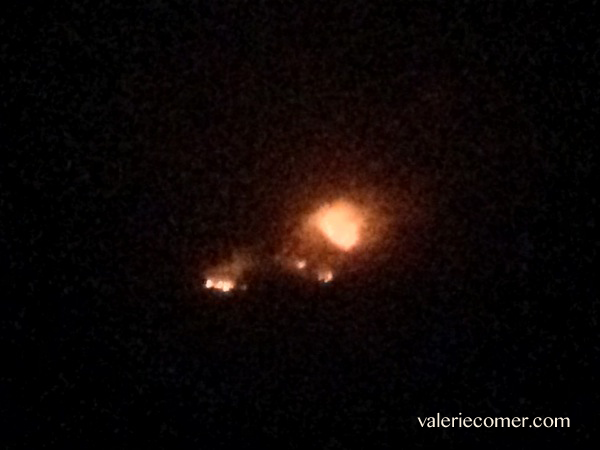 About 10pm on August 14, facing west from my yard (same blaze!)
Top photo is of the same mountain.

Where’s the romance in this? It’s hard to find! But anyone who’s lived under threat of earthquake, tornadoes, hurricanes, fires, or other disasters gets a crash course (sorry…) in priorities. In values.

What would you take if you received the five-minute warning to evacuate? What are the most precious things in your home? Things that can’t be replaced? While the loss of a good many items we own would cause hardship — perhaps even extreme adversity — only our families are truly irreplaceable.

Friends tell me I can use these experiences in a book, but I’ve already written a romance novel in which forest fires threaten properties and lives. I’m not sure I have another one in me. Here’s a snippet from Wild Mint Tea.

Claire struggled to her feet, still staring at the smoky wisps. A small explosion puffed as a distant tree went up in flame. “There’s a forest fire.” Rain began to spatter around her as clouds choked off the last bit of sunshine.

Noel stood beside her and stared for a moment. Then he reached down and shook out the blanket. It fluttered beside her as he bundled it up. He grabbed her arm. “Come on! We don’t want to be on the mountain top when the storm hits over here.” He threw the blanket into the truck’s back seat.

She stumbled behind him to the vehicle where he hoisted her into the passenger seat then slammed the door.

Noel shoved the truck into gear.

She clutched at his arm. “Look!”

“I see it. Can’t do anything about it from up here, but I’ll call it in when we get off the mountain. Hang on, I’ll be going fast, at least until we’re down into the forest.”

The truck jolted down the rutted road, rivulets of water already finding a twisted path down, racing the vehicle. 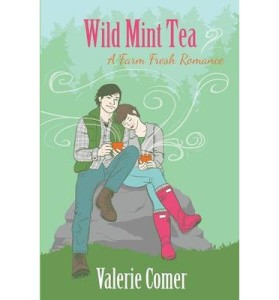 Want to read Wild Mint Tea? It’s available in e-book on Kindle and elsewhere, in paperback, and as an audiobook (links here). While it is the second book in my Farm Fresh Romance series, it can be read as a standalone. As well, the first book in the series, Raspberries and Vinegar, is a free e-book everywhere.

I’ll choose a random winner from among the commenters Wednesday, Sept 9.