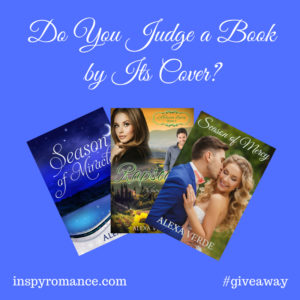 There’s that well-known saying, “Don’t judge a book by its cover.” But I often hear that cover is the first thing readers see and if it’s a new to them author, there are only several seconds to capture their attention before they might move on to the next, more attractive cover and the book behind it.

I’d love to use this opportunity to hear what you like to see in a cover!

I’ll talk about some challenges I encountered while making/choosing covers. First, it’s a bumpy road trying to figure out what to put on the cover, and I’m still learning. When it comes to my very first romances, a few readers told 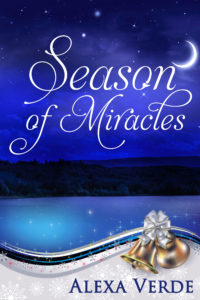 me they bought my books because of my writing and despite the cover, not because of it. Ouch! I had no clue what I was doing, and the designers I hired, while skilled and talented, went with my wishes. (Some readers did like them, so there’s that.) I was so in love with this scene of the river at night and stars that I featured it on the cover of Season of Miracles. Then I was told repeatedly there should be a couple on the romance novel cover, or at least the heroine. So I ordered a new cover. Well, I liked it much less! Besides, I was afraid some readers might consider it a new book and buy it and then feel misled. What do you think of books re-released with a new cover? 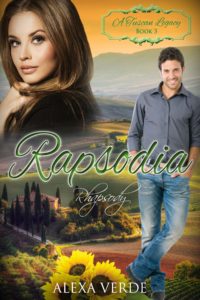 Personally, I like covers that give me a vibe of love and warmth, and a couple that looks in love says that to me, so I often feature a couple on the cover now. And it says, “romance,” which is also very important. But I figure, beautiful scenery in addition to it doesn’t hurt. One of my favorite types of covers are the ones Marion Ueckermann made for A Tuscan Legacy series. The Italian scenery looked gorgeous to me, and when I saw these images, I knew they were Marco and Samantha! So the cover for Rapsodia was born. 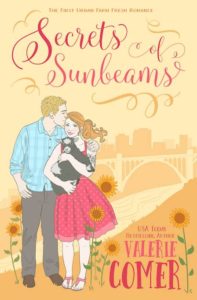 So now that I know what I (might) want, it should be a breather to find the image for the cover, right? Wrong! These days, I make the cover before writing the book. It’s much easier to adjust my imagination than to find a photo that would fit my main characters! Plus, it’s difficult to find a good image of a couple that hasn’t been already used by other authors. (What do you think when the same couple image appears on many romance covers?) I think Valerie Comer found the perfect solution to this: illustrated covers. I love covers of her books. Doesn’t this cover for Secrets of Sunbeams look beautiful? And it’s totally unique. 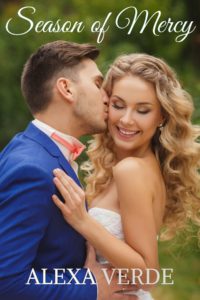 There’s a reason why on some of my covers the hero’s face is turned the way that it is sort of hidden. I might be too picky because with a few exceptions, I often have difficulty finding a handsome male model, especially, again, the one who hasn’t appeared on many covers. When I can’t see his face in its entirety, I can imagine him to be a very attractive man, and I hope my readers can imagine him the same way, too. My skills don’t come anywhere close to Marion’s, but here’s my attempt at a cover for Season of Mercy.

What do you like to see on the cover? Is it scenery? A couple? The heroine? The hero? Scenery and a couple? What about a couple you can’t see their faces and can imagine what they look like?

Giveaway: one randomly chosen commenter to this post will receive 1 Kindle copy of the winner’s choice of my books. The ebook will be gifted via BookFunnel. The giveaway is open until 6 p.m. CST on June 8th.

I’d love to hear what you think!