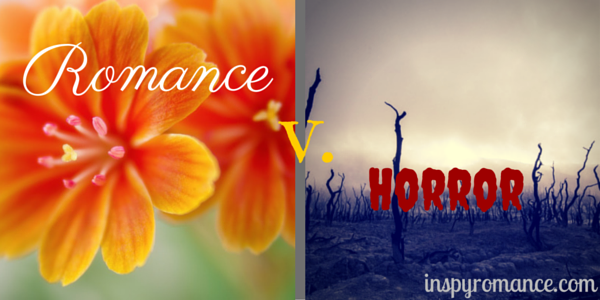 I write Christian romance, and I love what I do.

Every now and then, though, I get a little tired of the same-ol’-same-ol’.

It’s not that I get tired of Christian fiction, but let’s face it. Romances have happy endings, and sometimes in life, we just don’t get the same. Every now and then I want the fiction I read to be a little more representative of real life.

If I want my reading material to be like that, why not what I write? 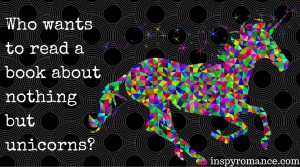 I’m not in love with horror as a genre, but I figure it’s a good place to dip my toe in the pool.  I’d be way out of my depth in sci-fi or paranormal, and don’t get me started on fantasy.  I don’t know the difference between an elf and an orc, let alone an orc and an ogre or an ogre and a goblin. Unicorns.  I know what a unicorn is.  It’s hard to write an entire fantasy novel with nothing but unicorns, though.  Not that I’ve tried. It just seems like it would be a challenge. Or at least one-dimensional.  (Even if it would be a pointy dimension.)

So back to horror.

I thought I’d try my hand at it.  See what you think.

The sun rose on the horizon and forced its way through her window, scorching her eyelids until she rolled over and buried her face in the cool cotton of her pillow.

With little thought for the dark shapes that had haunted her dreams the night before, Liza rose from her bed and dragged her way into the bathroom. The sight in the mirror was anything but pleasant. She had two job interviews ahead of her, and she looked like the walking dead.  True, her flesh wasn’t rotting off, but the circles under eyes were dark enough to give any zombie a run for their money.

A lengthy conversation with her toothbrush – nobody wants to bring morning breath with them to an interview – followed by a hot shower and a fresh set of clothes almost brought Liza into the land of the living. She only needed one more thing to make her morning complete. 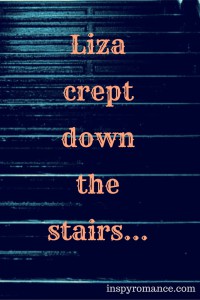 Liza crept down the stairs, hop-scotched through the dining room to avoid the series of creaky floorboards, and made her way into the kitchen.  A furtive look to the right and left assured her she’d not yet been discovered.  Ravenous beasts lurked about waiting to steal her food, so she usually waited until she left the house to eat.  There was one thing, though… one thing she simply couldn’t face the world without. She had to have it. The life of everyone she came into contact with depended on her morning inoculation.

Liza opened the cupboard, pulled the medicinal mix down and removed the tightly sealed lid that guarded it from spillage.

People’s lives depended on this. If she didn’t get her…

“Yo, Liza.” The voice slithered across the room.

Heart racing at triple time, she turned toward the intruder. One of the ravenous beasts had woken and now looked at her with hungry eyes.

“Breakfast.” Drool pooled at the corner of his mouth.

Avoiding eye contact, she flicked her hand toward the fridge. “I’m sure there’s something in there.”

She risked a peek.

His eyes flick toward the fridge and then back to her. He licked his lips. “I suppose.” 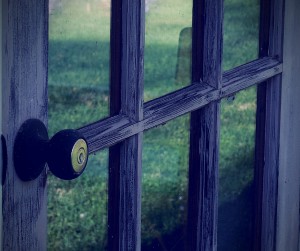 On shaking legs, she inched away from the counter and toward the door. What was she going to do? Until she got a job, she was broke. She needed her morning shot, and she didn’t have money to replace what had gone missing.  No one would be safe around her, and she would end up blowing both interviews. This was bad. Very, very bad.

Her hand was on the nob when she heard movement behind her. A furtive look told her it was too late. The beast was upon her. Only, he wasn’t trying to force her back into the kitchen, a slave to his constant demands for more food. He was waving something in her face. What was that…?

“Here Sis. You’re useless without your morning shot of caffeine, and I emptied the coffee can last night. Here’s a ten. Get yourself some fancy coffee drink on the way to your interview. Just don’t spill it on yourself. Nobody’ll hire you if you look like a slob.”

Liza grabbed the bill and bolted out the door. Order was once again restored. She would have her coffee, and the rest of the world would be safe. 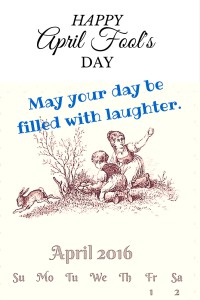 Hm.  Apparently even in horror I have the compulsion to write a happy ending.  Go figure. (Let’s face it.  I’d never punish a character by making them go permanently without coffee.  I’m not capable of that much cruelty.)

So what’s the biggest April Fool’s prank you’ve ever pulled? I have friends who always come up with fantastic and elaborate jokes.  I usually consider it a success if I make it through the whole day without publicly embarrassing myself.  (Of course, that’s kind of my definition of success any day of the year…) ;)

And now I’m off to go do what I love…write more Christian romance! ;)