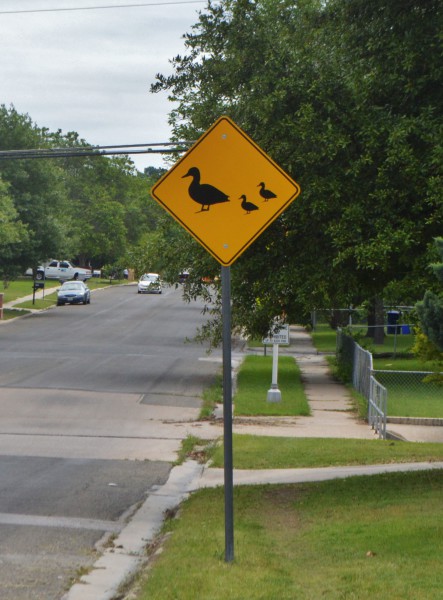 There is a busy street in our town, not that the traffic passes quickly on it, but it’s a well-traveled street that is part of a route to two schools, along with leading to the main drag that runs through our city.

A large storm drain runs under one section of the street. It definitely comes in handy during the spring, summer, fall or winter rains here in Texas. And, there is a duck family who loves to go from one side to the other.

Most of the time they travel along the concrete drain under the bridge that crosses above it. But other times, the mama duck will zigzag across the street to get to the other side. Last spring, this caused a problem for drivers and probably a bit of concern for her. Drivers would brake and wait for her to get her little band of fluffy ducklings safely across. One concerned driver posted on the city’s Facebook page and asked if a warning sign could be put up so drivers could beware. It took about two weeks, but two signs went up and everyone breathed a sigh of relief.

But mama duck, even with the signs put up by the humans, still has to get her ducks in a row and following along with her.

Our lives are like that – all these little things we try to wrangle into place so we can keep right on going to where we need to be.

How do we keep our ducks in a row?

I keep lists, especially if I have a big day. My phone has a chime that alerts me to events where I, a news editor, need to be (today had four chimes—whew!). I have a lot of ducklings to wrangle! Sometimes, as soon as I feel the little darlings are all lined up, another one pops up and tries to make a break for it. One more duck to get in the row.

Years ago, the Daytimer was all the rage, fancy leather binders with sections for everything from Christmas card lists to a place to tuck your bank statement. I owned one, and it worked for me during the time I used it. 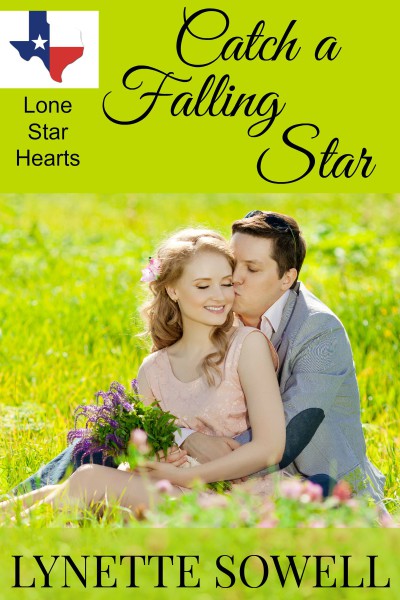 Now, all kinds of journals and calendars, electronic and otherwise, are available for us to use. I’ve seen the Passion Planner, which isn’t so much a scheduler as it is a tool for goal setting.

What is your favorite organizer for your time, tasks, and goals?

Leave a comment and I’ll draw a name next Saturday, January 30, at 9 p.m. CST. The winner will get an e-copy of Catch A Falling Star, book one of my re-released series Lone Star Hearts. It’s set in the fictional town of Starlight Texas, very close to where I live near Fort Hood.

Justine Campbell would gladly rewind her life a year or so back before it crumbled around her like so much gilded plaster. Billy Tucker could use a rewind button, too. He’d go back to the day before his humvee exploded in Iraq, injuring himself and killing two of his buddies. Billy’s bitterness and Justine’s humiliation make for a prickly pair when they first meet, but can either of them let go of the past long enough to let God make their paths straight again?

Welcome to Starlight, Texas, a small town with plenty of Texas twang and a kaleidoscope of cultures from around the world, thanks to nearby Fort Hood.