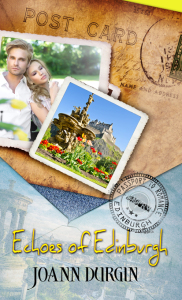 My new novella (really more of a short novel due to its length), Echoes of Edinburgh, releases tomorrow! I had so much fun writing this one. I’ll be honest: most publishers stay as far away as possible from a book set in a foreign locale. I love to travel; it’s one of my favorite things in life! I was blessed to have done quite a bit B.C. (in this case, “before children”). When I learned the publisher for my Christmas novellas, Pelican Book Group/White Rose Publishing, was launching a new line called Passport to Romance (romances set in foreign locations), I jumped on-board immediately. Let me give you a little background…

I’ve always said the best part of my college experience was the quarter I spent studying abroad in London instead of on the main campus. Earning a 4.0 for studying art at The Tate Gallery, attending productions at the Royal Globe (Shakespeare) Theatre, the opera, the ballet and listening to the London Symphony Orchestra—I ask you, what could be a better learning experience for a relatively sheltered 19-year-old girl from southern Indiana? What a blessing! My time in London opened my eyes to other cultures, customs, languages and proved one of the most fabulous times of my life. I also credit my London Centre semester for helping me become more independent and adventurous. During my ten weeks in London (followed by a three-week tour of the Continent), I embarked on a fun weekend jaunt with two roommates on the high-speed train from London to Glasgow, Scotland, and then traveled from there to Edinburgh. Although my time in Scotland was short, I fell in love with the beautiful countryside, in particular, and with the city’s rich history. 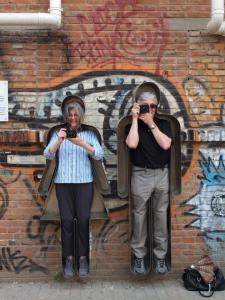 The book is dedicated in part to my cousins, Terry and Lyntha Eiler, who have gone to Edinburgh for 30 years with photojournalism students from Ohio University. Terry and Lyntha were invaluable resources of viewing Edinburgh through the eyes of Americans abroad. They provided the type of “insider” tips only observed by those who’ve been to Auld Reekie and Athens of the North multiple times. While many aspects of the city have not changed, others have transitioned through the years, as represented by the recent vote by Scotland as to whether to secede from the UK (voted down).

Without wanting to sound like a travelogue of Edinburgh, I tried to incorporate a number of notable tourist sights in the capital city of Scotland as seen from the perspective of Americans—my heroine, Shelby Harmon, and her hero, Harrison (“Harry”) Reed—with a sense of humor, adventure and romance. Many of my readers may never personally experience Edinburgh, so I wanted to give them an idea of how fabulous it is! I’ll confess the one thing I didn’t love about Edinburgh was the food, which I incorporate with well-intentioned humor in Echoes of Edinburgh. As Harrison tells Shelby, the Scots have two favorite meals: breakfast and tea. I will confess that Shelby is more adventurous than I am when it comes to tasting the dishes indigenous to Scotland! 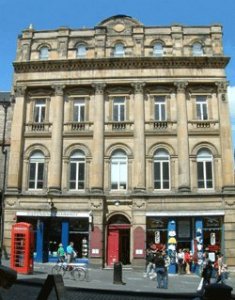 I also needed a place for my characters to attend a worship service. Imagine my delight in my research when I discovered Carrubbers Christian Centre, a non-denominational, evangelical church located on Edinburgh’s famous Royal Mile. Perfect! The photo on the left is a photo of this fabulous church which  started as a mission in an alley in 1858 with the purpose of introducing children to Christ’s teachings. D.L. Moody helped raise money to build the church, and he preached at the laying of the foundation stone. It’s one of the original buildings on Edinburgh’s famous Royal Mile still used for its original purpose. Whenever I make it back to Edinburgh, I’m definitely going to pay Carrubbers a visit!

Let me tell you a bit more about Echoes of Edinburgh. The best way to do that is by giving you the “back copy” blurb:

To honor her dying father’s wish, Chicago stockbroker Shelby Harmon promises to hand deliver an envelope addressed to “Robert Nichols, Personal & Confidential.” Her quest to find Robert leads her to a most unlikely place—the Castlehill Gardens outside Scotland’s Edinburgh Castle. Who is this fiercely private man and what is his connection to Harmony Lane, her family’s horse farm in Lexington, Kentucky?

Harrison Reed cautions Shelby against dredging up hurtful memories for his close friend, Robert. As they explore the city together, Shelby and Harrison find themselves increasingly drawn to one another. When the contents of the mysterious envelope are revealed, the answer gives her hope for the future of Harmony Lane. Is the time spent in Edinburgh with Harrison destined to be nothing more than a beautiful memory? Did Shelby lose her heart in Edinburgh…or find her way home again?

One of the predominant themes in all my books is one of finding our true purpose and seeking God’s will for our life. Echoes of Edinburgh addresses this issue from both the perspective of my hero and heroine and told with humor and heart. I loved writing this book, and I hope you’ll take the opportunity to read it!

NOTE: Please leave a comment on this blog post about anything to do with travel, foreign or otherwise, and you could win one of two eBook copies of Echoes of Edinburgh!