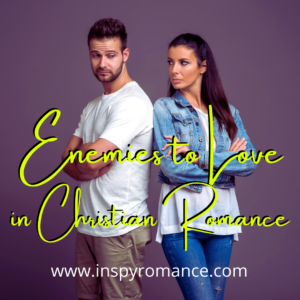 Enemies to Love stories are some of my favorites. I love reading as characters walk that long between two equally strong emotions: love and hate. As I’ve been writing an enemies to love story (Dancing with Dandelion, the final book in the Bloom Sisters Series), I’ve discovered this particular storyline comes with its own set of challenges, especially in Christian Romance. Afterall, we are called to love our neighbor — and 1 John says whoever hates their brother walks in darkness! Whoa.

So how can I write a story where the hero and heroine hate each other at the start? As an author, I don’t want either of them to be inherently “unlikeable.” The flaw that the other character despises in them can’t be something so terrible that the reader won’t root for them to be together!

When I started thinking about Andi (aka Dandelion, but only if you want to feel her wrath) and Ross, I had to decide why they immediately clash. Andi is a Sergeant Major in the Army. She’s an expert in her field and used to having her opinion valued and her orders followed. But after 20 years in the service, she is ready for something different, and goes back to Bloom’s Farm to act as the head of security and open a martial arts dojo nearby.

Ross McClain, on the other hand, is still very much in the trenches of life as a Secret Service Agent. He’s used to having his orders followed and his opinion valued by his team leader. He’s very much in control of his actions, his environment, and his body as an avid student of martial arts.

Turns out – when I started to write these two characters, it wasn’t so much that either of them was particularly unlikeable. But they are similar enough — and stubborn enough — to clash when it comes to almost anything.

I’m still in the throes of letting them tell me exactly how these two strong leaders learn to compromise and admit the tension they feel isn’t always as much on the dislike side of the line as they might insist!

Andi and Ross won’t get their story told until January, so until then — if this is a storyline you like, here are some books with enemies to love that I’ve enjoyed!

Rose Fresquez – Short Sighted
She needs a job. Her enemy is hiring.

These two characters have to put the past behind them to achieve a common goal — a perfect formula for turning enemies into true loves!

Elizabeth Maddrey – So You Love to Hate Your Boss

She doesn’t pull her punches. He never needs to throw one. Can these opposites cooperate long enough to fall in love?

I can always count on Elizabeth to handle a tough storyline in a grace-filled way. I loved watching these two characters discover they weren’t actually as different as they once thought.

Toni Shiloh – The Trouble With Love

Holiday Brown has everything — including a thorn in her side in the form of her best friend’s brother. I loved watching her reevaluate her opinions about the man she can’t stop thinking about!

Enemies to Love is a great story to combine with a second-chance romance, and Jessie Gussman does it perfectly in this one!

What about you — do you like to read about two people who butt heads or misjudge eachother, only to realize they really have far deeper feelings? Drop some enemies to love stories in the comments if you’ve got them, and tell me why you like this storyline or if it’s not for you!