Here’s the thing. I love to read because I want to experience every twist and turn of the character’s journey. Nothing makes a book more enjoyable for me than the sensation of getting lost in the story. I keep turning those pages because the obstacles seem impossible, the flaws and fears appear to be conquering my favorite fictional friends, instead of the other way around. Suddenly, I’m convinced the hero and/or heroine will never achieve their goals. So I press on, even though I know from past experience, that they will find a way to their happily ever after in the end.

Perhaps you can relate, reader friends.

I had the privilege of enjoying a sneak peek of Susan May Warren’s soon-to-be-released Rescue Me. Let me just say that any novel that begins with an adrenaline-fueled adventure like a bear mauling is my kind of novel.  Each time I start one of her novels, I tell myself I’m going to ration each chapter. Then I devour three chapters at once and vow to read only one the next day. The good news is, she’s releasing more than one book this year, so I won’t have to wait quite so long to read her next release.

I did savor each scene, I just conveniently abandoned my rationing strategy at approximately … oh, I don’t know, chapter four. Ha! Mainly because I couldn’t stop thinking about Sam, Jess, Pete and Sierra, and how in the world they were going to survive all the author threw at them. Another hallmark of a great read: when fake people invade my real-life thoughts.

All gushing aside, one of the many characteristics of her novels that I genuinely admire is her ability to craft flawed characters with genuine struggles, and the subtle message of Biblical truth she weaves into every novel. I might not be running from a bear, or hiking out of a canyon in a storm, or tending to anyone’s life-threatening injuries, but I can relate to a character who needs a reminder of God’s unfailing love and promises to His children. It’s these pithy bits of dialogue between these fictional friends that always speak to my heart. That, my friends, is what ultimately blesses me when I read Susan May Warren’s work.

When Deputy Sam Brooks commits to something, nothing can sway him–not just on the job as liaison between the Mercy Falls sheriff’s department and PEAK Rescue, but in his private life. He’s the one who stuck around to take care of his mother after his father’s accidental death. And he’s the one–perhaps the only one–who believes Sierra Rose is the perfect girl for him. Safe, practical, and organized, she’s nothing like her hippie, impulsive, bleeding heart sister, Willow.

Willow, however, has been in love with Sam Brooks for as long as she can remember. But she wants her sister to have a happy ending. Besides, Willow has other things to focus on–namely, nabbing the job as youth pastor for her small-town church. Best thing for her to do is to purge Sam from her heart.

Neither can predict the events that will bring them together in a fight for their lives in the forbidding wilderness of Glacier National Park. Stranded, injured, and with the winter weather closing in, Sam and Willow will have to work together to save a crew of terrified teenagers. As they fight to survive, they might just discover a new hope for love. 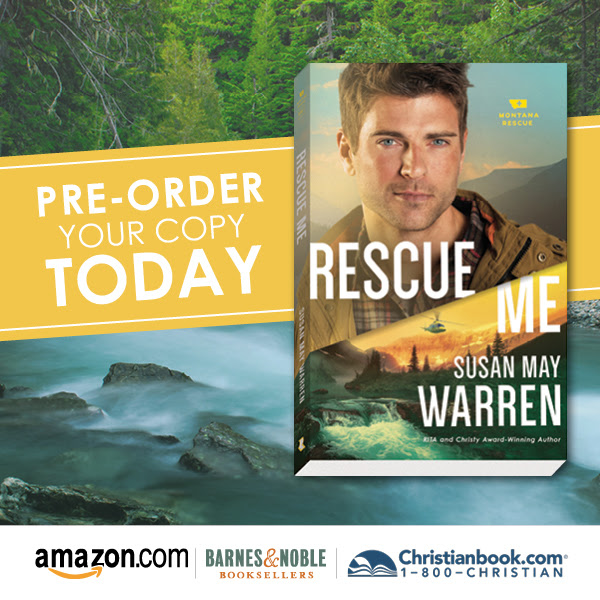 Pre-order Rescue Me from Amazon here

Five copies are up for grabs via a Goodreads giveaway running until January 31 (which is also Rescue Me’s release day). Click here to enter.

Thanks for stopping by and happy reading!