I’ll admit that, as a reader, I don’t always pay a ton of attention to covers. (Or at least not a ton of *conscious* attention. Obviously there’s something that gets me to pick up a book and flip it over, but if I really think about my last purchases, it was the title that got me to look more closely. Especially now when I do most of my book buying online and the blurb is right there (or at least a snippet of it) and I don’t have to do any heavy lifting.) As a writer, I know covers matter.

When I was writing for a small press, the cover design process was basically a conversation and a one-page idea sheet. Then, before long, I had a cover in my hands. It was great. Now that I’m indie, I understand just how great it was, because it was not me spending hours flipping through page after page of stock photos until I wanted to cry. (Honestly, sometimes I wonder about the photographers who tag their photos. You put in a search for “young blonde woman” and even on the first page you’ve got women with black hair and men. Maybe it’s the search engines, but still. And I won’t even discuss the clothing–or lack thereof–on so many of them. Ugh.)

Still, covers must be made, right? So when it came time to recover my first and second book in anticipation of their re-release, I took a deep breath and went poking about on the stock photo sites. (I know some authors do photo shoots. And I applaud them, I really do. I can’t even fathom the work that must go into those. I don’t see it being part of my repertoire anytime soon.) It was harder for these books because they already had covers that I really liked. 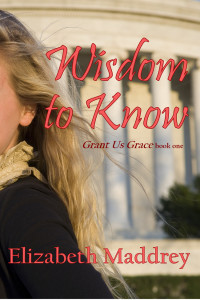 First up was my debut novel, Wisdom to Know. This is the original cover and I just love everything about it. That’s the Jefferson Memorial in the background (so a good D.C. reference, plus it’s a player in a fairly  major scene) and I like that you can’t really see the model. I enjoy making up what people in books look like, so when the cover has a photo that spells it all out for me, I tend to be sad. (I gather from talking to readers, however, that the majority of the world prefers to have a good likeness on the cover.)

Lydia, the heroine, is a bit of a wild-child. So I played around with showcasing that in these twiddles. I started out with a purple-y evening sky with the Lincoln and Washington Monuments glowing in the background.I liked the sky color, I liked the sort of evening look on the model and the fact that she wasn’t just a shiny happy person. Cause Lydia has some issues to work through. But talking to a few folks whose opinions I respect raised the question of whether or not she looked, as one put it, “like a call girl.” I wasn’t going for call girl!

That led to take two. I tried a different model pose which, I was hoping, might get rid of the whole call girl thing. Results were split on that. Was it the background or the model? I played with changing the pose again. But…in that one the model was just too happy. Not that Lydia isn’t happy, sometimes, mind you. That just…didn’t work for me though.

So I found another background and went back to the original model. Most agreed it was better but still on the iffy side–apparently the evening dress was throwing them off (and that’s even after I modified her neckline. The original photo’s neckline was…not what I was going for.) And now the bonus was that the evening dress didn’t match the clearly day-time sky of the background.

A little more digging and I finally found a picture (of the same girl, even) that I really liked. Mix it with the new, blue background and we have the new cover for Wisdom to Know! (I originally included my mockups here for you to see, but since I was just playing with comp downloads to start, I didn’t want to run the risk of sharing a photo I hadn’t purchased the rights to use.) 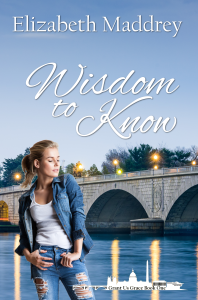 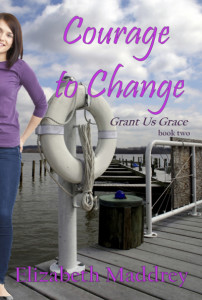 I also ended up needing to recover book two in the series, Courage to Change. This one wasn’t quite as hard, thankfully! (Even though, as with the first book, I actually really liked the original cover. Though on this one, I have a couple of reviews that ask about how the cover fits in with the story. So that’s not good. In point of fact, where Allison is standing is dock where she and Phil have two dates and he proposes very nearby as well. But I guess that’s too technical a detail as the book really isn’t nautical in nature. Ah well.)

For this cover re-do, I ended up going with  my original concept, though I took a brief detour to a purple background when I was going through all the purple backgrounds of Wisdom up there. It was okay, but her outfit didn’t really match the evening look and…the picture itself is a little busy. (I love the photo but it might be the most amazing thing for a book cover. I struggle with that a lot. Beautiful photos don’t always make good book covers.)

Shortly after finding a blue cover for Wisdom I knew I was better off heading back to my original concept for Courage, giving us the final new cover for Courage to Change. 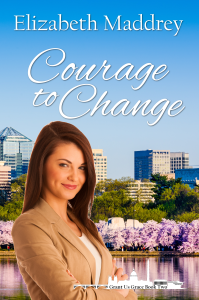 For a limited time,you can download a free e-copy of Wisdom to Know. If you haven’t read it and would like to, I’d love for you to snap up a copy. And, if you sign up for my newsletter, you can get Courage to Change for free, too!