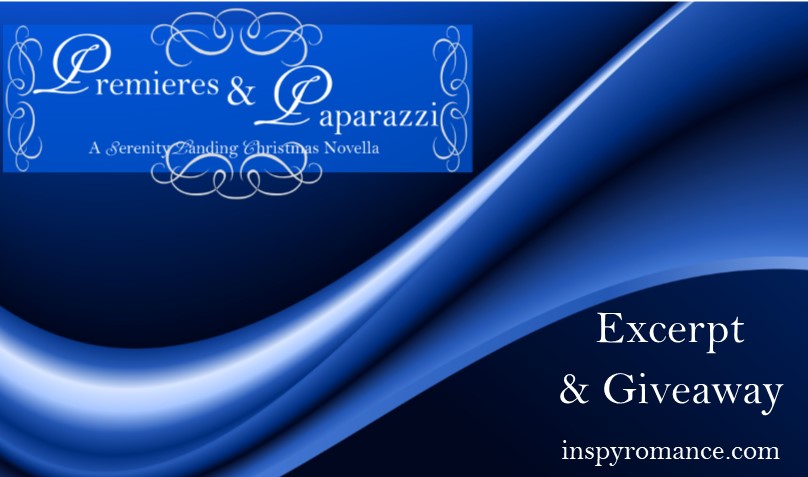 Last time I posted, I talked about “The Most Wonderful Time of the Year” and how, for me, the week I attend ACFW’s annual conference is that. But now it’s time to focus on the OTHER most wonderful time of the year ;). Christmas is coming in just over two months. For authors, we often try to release Christmas stories in September or October so people have time to read them before Christmas. Last month, we released a Christmas set called It’s Beginning to Look a Lot Like Christmas. My offering is Premieres & Paparazzi. Clair Cruz Cartwright from Glimpsing Hope gets her chance at Happily Ever After. Here’s an excerpt from Premieres & Paparazzi:

Kevin Rogers grabbed his bag out of the backseat of his 4Runner. He had two minutes before he was officially late. Good thing there wasn’t an actual time clock.

He hustled toward the building. The cold drove him as much as the time did.

“Hey, Mr. Rogers.” A student waved as she walked by.

“Hey, Cassie.” Kevin didn’t know the girl’s father well, but he was the drama teacher. Seemed like a nice enough guy.

His phone buzzed. With a sigh, Kevin pulled it out of his pocket. Not what he wanted to deal with first thing in the morning.

Before he could even read the text, his phone went flying from his hand when he ran into someone.

Please not a student. Or Dr. Underhill.

He looked up to see the most gorgeous blue eyes in creation.

A closer look told him she was most definitely not a student.

“I’m so sorry.” He bent down to pick up his phone. “I wasn’t looking where I was going.”

“I’m fine.” Her eyes darted around the building. “I’m looking for Mr. Harders’ room next to the auditorium. Can you tell me where that is?”

Kevin glanced around. No administrators or other teachers were in sight. “Sure.” He turned back the way he’d come. “I’ll show you. It’s a bit of a maze.” They took a few steps. “I’m Kevin Rogers by the way.”

“It’s a pleasure to meet you, Claire.” Kevin took her through the narrow corridor and two turns to get to the drama classroom. “There’s other ways to get here,” he explained, “but this is the shortest if you’re coming from the front of the building.”

He rapped on the open door and walked in. “Mr. Harders, Claire is here to see you.”

Mr. Harders’ eyes lit up. “Thanks, Kevin.” He walked toward them. “Thank you for coming, Ms. Cartwright.”

Kevin snuck back out the door before she could say anything. Claire Cartwright. He felt like the name should mean something to him.

He went up the back stairs to his classroom and spent the day teaching kids who might, or might not, want to learn about the Protestant Reformation.

After packing his things and making a few notes for the next day, he spent almost an hour on lesson plans for the next unit. When it was nearly finished, he went out to his car. Too bad the day hadn’t warmed up.

He’d much rather head straight home, but he had a date. Kind of. He’d signed up for one of the dating apps on a whim and was meeting a girl for coffee.

Chick-fil-A was just around the corner from the school and may not have been the best place to meet. Almost all the teen employees were students at Serenity Landing and half of the older ones had been a few years earlier. It was also a popular hangout after school.

If this didn’t go well, his humiliation would be on public display.

Once inside, Kevin looked around to see the woman he’d been chatting with on the app. He breathed a sigh of relief. At least she looked like her picture.

He smiled. “Yes. Heather?” They shook hands and made small talk about the weather.

Kevin turned to see the blonde lady from the hallway that morning. “Sorry.” He motioned for Heather to go in front of him. She entered the queue and waited for an employee to call them to the counter.

“I can help the next guest over here.”

Kevin let Heather go first. She turned to him. “I had an early lunch. Could we split some nuggets?”

Heather turned back to the employee, a girl Kevin recognized from the hallways, and scanned the rewards app on her phone. “I’ll take a large lemonade and a thirty-piece nugget.”

He wouldn’t have ordered quite that many, but whatever. “And a large sweet tea.” After swiping his card, he took the table marker thing and followed Heather toward a table in the back, setting the marker and his drink down.

She reached the table and turned, grabbing the marker. “Shoot. I forgot to ask for ranch dressing. Save the table?”

“Sure.” He sat in the booth and waited two minutes. Then three.

Then the blonde woman from earlier sat at the table next to him. “I hope you don’t mind. There’s a lot of kids in the other side.”

“And I hate to tell you this, but…” She pointed her straw toward the other door. “Pretty sure your date took your nuggets and left out the far entrance.”

Kevin’s shoulders slumped. “Great,” he muttered. “So much for a dating app.” He pulled his phone out to delete it.

She left her chair and slid into the bench across from him. “You seem like a nice guy, even if you did run into me this morning.” Her smile put him a bit more at ease.

“Making arrangements for your date?”

“No. Something else.” He didn’t even want to think about that. “So, what were you doing at Serenity Landing High today?”

“You don’t know who I am?” She sounded like she didn’t believe him.

Kevin just shrugged. “I thought you looked familiar, but couldn’t place you or your name.”

“Ah. Well, I was visiting Mr. Harders’ drama classes because I’m an actress and just moved to the area.”

Hadn’t he heard something about that one show his cousin used to watch? “Are you here for pleasure or work? That show about the twins or something?”

“The 2 Cool 4 School sequel. We shot the first season this spring. It releases on MyBingeFlix in two weeks. Seating for Six starts shooting the second season right after Christmas. I decided it was time to move.”

Most of that meant nothing to Kevin. He didn’t watch much television. “Congratulations. I hope it goes well for you and your co-stars.”

He gave her a sidelong glance. “The woman I want to marry?”

Check out It’s Beginning to Look a Lot Like Christmas on Amazon and in Kindle Unlimited! For your chance to win a Kindle copy, let me know how you feel about decorating (homes? stores?) before American Thanksgiving (Canadian Thanksgiving was the other day ;))? What about stores selling Christmas decorations before then? 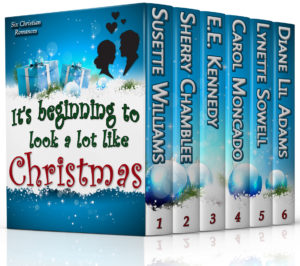 PREMIERES & PAPARAZZI
History teacher Kevin Rogers is juggling lesson plans, attempts at dating, and avoiding an ex-girlfriend. A chance encounter with an actress helps, until a tabloid article threatens to ruin everything.

Actress Claire Cruz Cartwright is making her move to Serenity Landing permanent. The co-star of the successful show, Seating for Six, is ready to settle down with a life outside of the Hollywood spotlights.

A night in the emergency room. The premiere of her new show. A conversation that bares her soul. The paparazzi who think everything is their business. Can their new relationship survive long enough to make it all the way to Christmas?