Hey everyone! Carol here! I hope y’all had a great holiday season! I know we did! I’m up to my eyebrows in formatting and edits and even writing my next novel! But in the meantime, I wanted to make sure y’all know that Protecting the Prince, novella 2.5 in my Brides of Belles Montagnes series, is still FREEEEEEEEEE to newsletter subscribers! Newsletter subscribers will also get special preorder pricing on new releases! And, to whet your appetite for Protecting the Prince, here’s the first scene :D.

A little set up…Tony is head of security for Queen Christiana of Ravenzario. The queen’s family, along with her nanny, was killed in a car accident when she was only five, making her the youngest ruler in Ravenzarian history.

What the queen didn’t know until recently? The bodies of her brother and their nanny were never found… 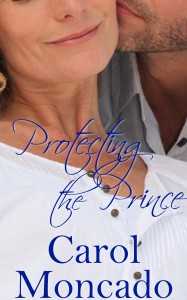 Tony Browning stepped off the plane in Athmetica, the capital city of the Sovereign Commonwealth of Athmetis. The unseasonable weather caused heat to roil off the tarmac in visible waves and threatened to give Tony heat stroke. The suit he wore was suitable for the current weather in Ravenzario but much too warm for Athmetis. Why hadn’t he thought to check the temperature?

For this trip, he was on his own. No chauffeur would meet him at the airport. No car would whisk him away to his destination. In fact, no one official knew he was here. He’d used his position as Queen Christiana’s head of security to gain diplomatic status in the island nation, but only because it afforded him less hassle. If, as he suspected, he ended up in the United States, he’d travel even more conventionally.

Once through the airport, skipping baggage claim, he hailed a taxi and took it to the hotel, in a village a few kilometers away, where he’d stay for the next couple of days.

If he couldn’t find any sign of the young prince and his nanny here, he’d move on to the next location on his list.

Tony blinked as the driver got his attention. “Yes?”

He shook himself out of his stupor. “My apologies.” Tony started to open the door, but paused. “Are you familiar with this area?”

“Of course!” His chest puffed up, as though offended Tony would ask such a thing. “I rode my bike around the entire village as a child. You want to go somewhere, I know the best way to get there.”

“You grew up here?” Could this be the stroke of luck he needed?

“Two streets over. My Yaya worked at this very hotel.”

“Rex, can I hire you for the next couple of days?” Confusion filled the other man’s face. “I need a guide who knows this area well. You would need to be on call twenty-four hours a day, but you will be well-compensated.” Tony named a figure he knew would entice the other man.

“No catch. I’m doing research into some people I believe came here in late 1999 or very early 2000. I need to find them. They may or may not still be in the area, but if at all possible, I need to know where they went.”

Could Rex’s eyes narrow any further? “Why? Are you a hit man?”

Tony laughed. “Quite the opposite. They ran from a family member who was quite dangerous. He has finally been put in prison for life. It is safe for them to come home, but no one knows exactly where they are anymore. I know where their first destination, here in Athmetis was supposed to be, but beyond that, we don’t know.” Time to lay most of the cards on the table. “To be honest I’m not even completely sure what names they used, just that they didn’t use their real names.”

He could see Rex turn the proposal over in his head. “Very well. You were to have been my last fare for the day, and I have two days off. You should talk to my Yaya. She’s known everyone in this area for the last sixty years or longer.”

Within ten minutes, Tony had been ushered into Yaya’s home. After exchanging pleasantries, he got down to business, pulling photos out of his pocket. “Do you remember seeing either of these people around the turn of the century?”`

Yaya took the photos and examined them carefully with the help of a magnifying glass. “So young,” she murmured as she held the photo of Prince Nicklaus. “So sad.”

“So sad?” Tony’s heart constricted. Had something happened to the prince and his caretaker in the intervening years? They hadn’t even considered that possibility.

“So sad his parents died so young.” She looked up and stared Tony in the eyes. “His sister and he were the only remaining members of their immediate family, no?”

Yaya must have seen the questions in his eyes. “Rex, please get our guest something to drink.”

“Of course, Yaya.” His gaze shifted between Tony and his grandmother, but he left.

“Who are you?” she demanded as soon as Rex was out of earshot. “Why do you want to know about these two people?”

Tony pulled out his credentials. “I am the head of Queen Christiana of Ravenzario’s security detail, ma’am.”

She took them and examined them closely. Satisfied, she returned them. “Very well. You may call me Yaya.”

He bowed his head slightly in acknowledgment.

“Do you believe in fate?” she asked.

Tony shook his head. “No, ma’am. But I do believe in divine guidance. I believe the Lord leads us places we need to be, when we need to be there.”

“It is why your queen is still alive.”

“Correct. She was sick when the car…”

Yaya waved a hand. “No. I read the papers, young man. I saw the stories about Henry Eit.” She spit into the planter next to her chair. “No good, that man. I know this for many years. But, if the papers are to be believed, the only reason you were finally able to arrest him was because Duke Alexander overheard something he should not have, correct?”

“Then you understand when I tell you I believe God brought you to the right taxi driver today.”

Tony blinked slowly. “What do you mean?”

“Come. I show you.” Yaya slowly stood. Tony reached for her to give her a hand, but she waved him off.

He followed her to the courtyard and toward a decorative door, covered with hanging plants. One of Yaya’s wrinkled hands reached through the greenery and did something Tony couldn’t see. The door swung open revealing a small room behind it. He looked at Yaya. “What is this?”

“This is the place Michaela and Nicklaus stayed when they fled Ravenzario.”

Want more? If you’re not already signed up for my newsletter, there’s a link in the welcome email with all the details! And if you are signed up and missed it somehow – shoot me an email at carolmoncadobooks at gmail dot com and we’ll get it sorted out!

As an added bonus? One lucky commenter will get an ebook from the Brides of Belles Montagnes series – winner’s choice, including the upcoming Prince from her Past!