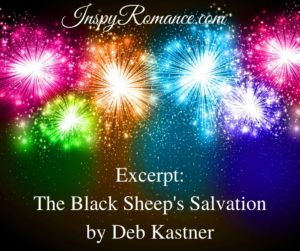 I’m super excited to have a new Harlequin Love Inspired book out this month. Not only that, but The Black Sheep’s Salvation is the first in a new six-book series set in the fictional town of Whispering Pines, Colorado. I’ve been writing books set in Texas over the past many years and I’m LOVING getting to write about a mountain town in my home state of Colorado.

The series explores the relationships of the six Winslow siblings who all work as part of the family businesses. First, we have Winslow’s Woodlands, which is a Christmas tree farm that sells landscaping year-round. The second business is actually a ministry, A New Leash on Love, which trains service dogs for various needs. I introduce a different service dog in every book. And you all know how much I love DOGS!!! 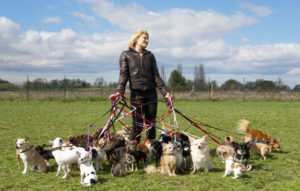 In The Black Sheep’s Salvation, Logan has returned to town because his son Judah is on the autism spectrum and he needs the help Logan knows Molly can provide. They were a couple in high school and had a pretty bad breakup during their early college years, so Logan has to eat some major crow to come back to Whispering Pines—but he’ll do anything for his son.

In the following scene, it’s the Fourth of July Festival and the pastor, along with Logan’s parents, have convinced Logan and Molly to run the three-legged race, which they’d always won together as teens. Not only is it awkward, but this time Great Dane Rufus wants to join in. Enjoy!

Apparently, Rufus had had enough of lollygagging under the tree with Logan’s parents and decided he needed to join the race, —more specifically, to tackle Logan to the ground and cover his face with big, wet doggy kisses.

Logan saw Rufus launching himself at them a moment before Molly did. There was no time to react, to command Rufus to stop in his tracks or for them to get out of his way, especially because Logan and Molly were tied together at the ankle.

Logan wrapped both arms around Molly and twisted to the side just as Rufus’s front paws made contact with his shoulder.

They were on a definite downward trajectory, so he did the best he could to take the brunt of the fall and landed flat on his back with an audible grunt, his cowboy hat tumbling off in the process.

He didn’t immediately let Molly go—not until Rufus wiggled between them, seeking her attention as well as his.

Logan huffed and squirmed under the puppy’s ministrations, bringing his arm over his face to protect himself from the dog’s onslaught. The only problem was that Logan and Molly were still tightly bound at the ankle, and when he tried to roll away…

“Logan,” Molly screeched, grabbing his biceps in a death grip. Tears sprang to her eyes as her fingernails bit into his skin. “It hurts,” she said through clenched teeth. “I think I must have sprained my ankle.”

Logan immediately turned back to Molly, using a little more muscle to push Rufus off to the side so he could untie the rope that bound him to Molly.

She groaned and lay back, propped on one elbow and grasping her bad leg.

He gently unlaced her sneaker but was interrupted several times by the curious puppy’s wet nose.

“Rufus, sit,” Molly commanded in firm, stable tone of voice that surprised Logan, given the painful grimace that accompanied her words.

As rambunctious as Rufus was acting, Logan didn’t think the dog would hear her, much less obey her command, but the moment the words left Molly’s lips, Rufus turned his full attention to her and plopped down to sit on his huge haunches. 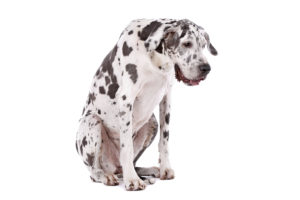 The dog immediately flopped to the ground, his gaze waiting for Molly’s verbal approval.

Logan could get where the dog was coming from. A smile from Molly was worth any kind of effort.

“Rufus, sit,” Molly continued with her commands, one right after the other. “Rufus, down.”

After several back-to-back directives, Molly finally praised the puppy and left him stretched out on the ground.

The she tried to move and immediately squeezed her eyes closed from the effort.

Logan was no paramedic, but even he could see her ankle was already turning purple and becoming increasingly swollen by the moment.

This was all his fault. He hadn’t had a great deal of time to react, but he’d seen Rufus a moment before they’d collided. If he’d been more careful when they’d rolled to the ground, maybe she wouldn’t be hurt right now.

Logan frowned. “Did it feel as if it twisted as we were going down?”

Logan’s parents hurriedly approached with Judah at their side. Her siblings also surrounded her, having seen the fall.

“Oh, wow,” said his mom. “That was quite a tumble the two of you took. I tried to grab Rufus’s lead when I realized he was going to bolt after you, but I was too late. His lead slipped right out of my hand. I’m so sorry.”

“No worries,” said Molly. “It’s not your fault. Rufus is a big brute sometimes.”

“Molly’s hurt,” Logan said, pressing his lips again the emotions rising in him. “Her ankle twisted when we fell. It’s already swelling and turning purple.”

“Ouch,” said Judah, leaning over to examine Molly’s wound, as completely enthralled with injuries as was typical of most boys his age.

“Yeah, and it’s all my fault,” Logan admitted.

Sharpe and Frost glowered down at him, clearly agreeing with his analysis of the situation.

“Let’s not sling blame,” his father suggested in his usual mild tone. He was probably right. What was important right now was getting Molly the help she needed. Her brothers could hold him accountable later.

“You should kiss it better,” Judah suggested. “That’s what you always do with me when I get hurt.”

But Molly’s tears of pain had turned into tears of laughter. “Yeah, Daddy. I’m sure if you kiss my boo-boo it will feel much better.”

Their gazes met and locked. What kind of game was she playing here? Was she trying to humiliate him? Put him in his place?

But, no. There was absolutely no malice in her beautiful green eyes.

As usual, she wasn’t thinking of herself at all, although how that was possible with as bad an injury as she had was beyond him. She had to be in some serious pain right now. Yet as awkward as it was for both of them, this was all about Judah’s reaction, helping him feel comfortable in what might otherwise turn into something completely different. It didn’t take much for Judah to become anxious and panic-stricken.

Judah was an ultrasensitive little boy. If he realized his favorite teacher Miss Molly was in the amount of pain she was so graciously trying to mask for his sake, he might not respond well to it.

He’d already had enough overexposure for one day at the festival even without worrying about his teacher getting hurt.

Clearing his throat, Logan combed through his hair and then leaned down and brushed the tenderest of kisses over Molly’s swollen ankle.

His parents whistled and applauded, which only made the hot blush on his cheeks grow worse. Did they really have to make such a big deal about this? 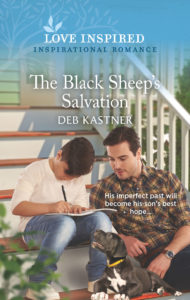 “Is your owie better, Miss Molly?” Judah asked her, his wide-eyed gaze as serious as ever.

“It is,” Molly replied. “All better. I’m so glad you and your daddy were here to help me out. I don’t know what I would have done without you.”

Hope you enjoyed the scene. You can purchase your copy of The Black Sheep’s Salvation HERE.