It’s release day for Winter’s Kiss, a collection of 6 Christian romance stories by bestselling authors, including fellow Inspy Romance author Ginger Solomon and myself! This project has been in the works since the early part of this year, so I’m thrilled it’s finally available to readers everywhere. 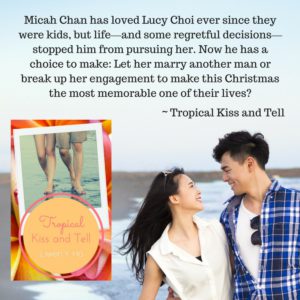 My contribution to the set is Tropical Kiss and Tell, a novella featuring two best friends, Lucy and Micah, who become something more. I wrote this novella in a flashback/flash-forward sequence with alternating points of view. Throughout the course of the story, you get to experience the characters’ relationship through the stages of childhood, adolescence, and adulthood. Here’s an excerpt from chapter one:

Lucy stabbed a pot-sticker with her chopsticks, holding one stick in each hand to poke holes in the doughy outer layer. She’d almost separated the filling from the skin when a shadow fell over her. Biting her lower lip, she looked up, expecting to see her dad’s disapproving face. Instead a teenager with a lopsided grin sat down beside her. He had a head of thick black hair and dark brown eyes like the color of Oreo cookies. His white polo shirt was covered in black
hair, likely from a dog or a cat.

“I eat pot-stickers that way, too. I thought I was the only one who did that.” He set his plate of food on the table. “I’m Micah, by the way. Sorry I’m late.”

She set her chopsticks down. Was he actually talking to her? The only boy who ever paid attention to her was her cousin Benji, but he and his gross bathroom jokes didn’t count. Micah seemed different, taller and more serious and mature. Maybe even cute. A strange sensation tingled in her tummy, making her cheeks warm. “I-I’m Lucy.”

“Hi Lucy. “Micah reached over to ruffle his sister, Hope’s, hair. “It looks like these two are having a good time. I hope you weren’t too bored with no one to talk to.”

“No problem,” she shrugged, trying to sound cool. “This is what lunch is like for me at school every day.”

He eyed her for a moment and a line appeared between his eyebrows. “That’s not cool.”

“I hope you don’t. We all need friends. It may take time, but I’m sure you’ll make some new ones soon.”

How could he be so sure? “How do you know? Have you ever had to move?”

“No,” he answered between bites of food, “but a lot of things work out after a while. God’s in control and there’s a reason for everything that happens.”

Wow. Micah wasn’t just mature, he was ancient. No kid talked this way. “How old are you?”

“You sound older than that.”

His mouth curved up in a confident grin. “I do, don’t I? I think it’s ’cause my voice is getting dee … per”—he grimaced as the vowel came out as a squeak—“most of the time that is.”

Lucy giggled to see the tips of Micah’s ears turn red. “I didn’t mean your voice. It’s what you said. You talk about God the way my pastor does. He’s got white hair and wrinkles, kinda like Santa, but wiser.”

He chuckled. “I only talk that way because it’s true. God works out everything for our good, for those who love Him and are called to His purpose. There’s a verse in Romans that talks about that. You’ll see.”

Lucy smiled. The smartly dressed man in a blue dress shirt and khakis wasn’t her blood sibling, but he might as well be. Micah had kept his word since they met to do everything an older brother would do: answer questions, give advice, and tease her whenever possible. He had changed in many ways over the past fifteen years—grown half a foot, gained a deeper voice and enough facial hair to require shaving daily—but his heart was the same. Always willing and eager to help people and watch out for them. Being a school counselor was the perfect job for him. He’d helped her navigate through some of the toughest times in her life and now he was doing the same for the students at Union High School.

She considered it a privilege to see him in his element. After she experienced what her dad referred to as a reality check (and what she called being broke), she’d given up on her dream of becoming an actress. Instead, she was helping to train up future actors as a drama teacher. It wasn’t as glamorous as Hollywood, but she was able to support herself. And the best part? She worked with Micah every day.

He hung up the call and placed the receiver down. “Hey, sorry about that. Let me lock up and we can go.”

“No problem.” His voice was more weary than normal, even for a Friday afternoon. “Is everything okay? I bet a lot of the juniors are freaking out about how they did on the SAT last week. Did you have kids lined up out the door to talk to you today?”

Micah’s lips curved up for a split second. “You can always tell when I have something on my mind. That was a parent of a student who’s having a hard time.”

“I hope so.” Sighing, he closed the file cabinet behind him and locked it. “These kids should be enjoying their classes and having fun with their friends, not acting out.”

“Let me guess, the family’s going through some problems?”

“Yes, the parents are separating. I know how painful that can be.” He grabbed his messenger bag and coat and headed for the door.

Lucy followed him out of the main office building and into the half-empty parking lot. She hopped into Micah’s sedan as she did every morning and afternoon when they carpooled to and from work. Although they were no longer neighbors—they had both moved out of their parents’ houses—their apartment complexes were within a few blocks of each other.

“At least the parents sound supportive. That makes a huge difference.”

“I agree. I feel like my hands are tied though. I can talk to the kid, but it’s up to them to change.”

This didn’t sound like the optimistic Micah she knew. She squeezed his arm. “They will. They’ll want to change once you talk to them. It may take some time, but things will turn out okay.”

He turned in the driver’s seat and gave her a curious glance. “What makes you so sure?”

“You just gotta have faith that God will work things out. A wise boy taught me that a long time ago.”

Her words seemed to catch him by surprise. He didn’t say anything for a moment, but his eyes brightened as he studied her. “You don’t say?”

“He was right, too.” She narrowed her eyes as soon as she spotted his smug smile. “But don’t tell him I said so.”

Chuckling, Micah leaned close and cupped her chin. “Too late, Luce. He heard every word.”

The spicy scent of his aftershave coupled with the heat from his hand stole her thoughts. She swallowed hard, trying to make sense of his intense expression. What was happening? Old emotions she had stuffed away for years bubbled to the surface. No, stop. She had a boyfriend now. A kind, sweet man who cared for her and—oh, what was his name again? “John! He’s waiting for us. We better go.”

“Sure thing,” he replied, his eyes zeroing in on her mouth. “We should go.”

If she had any brain cells left, she would’ve broken off their contact right then. Unfortunately, she still couldn’t think straight. Only when he dropped his hand and began driving did she give herself permission to breathe again. 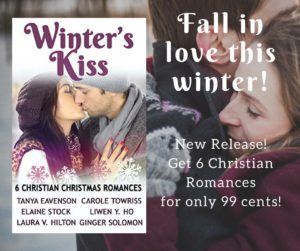 Get your copy of Tropical Kiss and Tell and five other wonderful novellas for only 99 cents!

Also, please join me and the other authors of Winter’s Kiss at our release party this Saturday, November 11th. We’ll have special guest hosts, games, and giveaways! Click HERE for the Facebook event page. The party will run from 12-6pm (EST), but giveaways will remain open for 24 hours after the party ends. I look forward to seeing you there!

Tell me, how do you feel about stories with flashbacks in them? Please let me know in the comments below!