Right now I’m working on a married romance, and I’m far enough along in the process that I decided to see what other similar titles were out on the market. 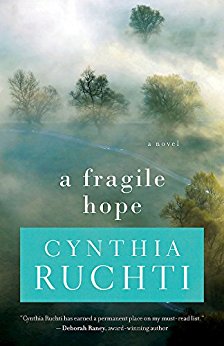 A favorite that was just released is Cynthia Ruchti’s A Fragile Hope. I’d heard about this book. People were saying it was good, plus it was written by Cynthia who I’m sure many of you are already fans of. And then I heard it was about a married couple whose marriage was falling apart.

The fun thing is that the book was nothing like I’d expected. Nothing. The book starts in her point of view and then moves solidly over to his point of view. And we spend the majority of the book inside his head, listening to him examine his wife, his marriage, himself and analyzing what went wrong.

Romance doesn’t stop with the vows, does it? It doesn’t walk down the aisle with you and head out the church door and vanish. At least, it shouldn’t. But we all know that life keeps us busy. That jobs and kids and stress and extended families can take more of our attention than they should. And it’s too easy to forget how special the person is that we married.

That’s why I’m such a fan of books like this, books that remind us to value the person we’re married to. The person whose annoying habits we know too well. The person who’s probably changed a bit over the years. A Fragile Hope is an excellent read for that reason — and for pure entertainment too.

So ‘fess up! Do you enjoy married romances or not? What titles like this one do you recommend?