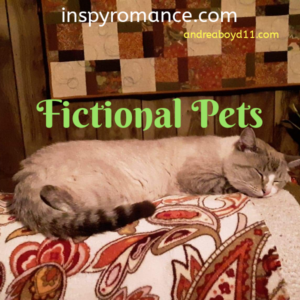 Meet Axel. This is him doing what he does best—sleeping. He loves me and gets moody if he misses out on sitting in my lap while I drink my first cup of coffee every morning, but he’s not too fond of other people. He drools when I pet him. I’ve never had a cat do that before. And he is super jealous when it comes to me and other cats.

You might have guessed it, but when it comes to dogs versus cats, I’m definitely a cat lover! I’ve had a few dogs over the years, but I’ve never in my life NOT owned a cat. But for all you dog lovers out there, no worries. I don’t discriminate when it comes to fictional pets. In fact, I’ve written more dogs to life than cats in my stories.

The first one, and probably the one with the most character is a Yorkiepoo named Winston from Heart’s Desire.

Winston sat on the couch, watching her every move. He probably wondered if he would be going bye-bye with her. She rubbed his fuzzy head and told him to be a good boy while she was gone. He knew those words were code for you have to stay here all by yourself—again. He laid down and placed his chin between his paws, giving his best sad-puppy look, but it didn’t work this time. Bailey picked up her camera bag and purse and walked out the door.

Cats and dogs are not the only pets I’ve written about. There are a pair of African gray-headed lovebirds in Upon A Dream. (part of the Once Upon a Christmas collection) It was fun researching about the birds.

Talia lifted the door and ran her fingers over Dunkin’s green feathers. He gently pecked at her hand searching for a treat. She shook the box of goodies and the noise became deafening as he excitedly hopped from one perch to another. After giving him his treat, she reached one further into the cage to where Frita sat in the nesting box. Familiar guilt settled over her as she doled out the dried fruit.

And of course, I do have cats. The Spencers in Waiting For You have a bunch of feral barn cats—all named Elvis. And Irresistibly Yours has a skittish tortoiseshell cat with a cropped tail named Ember. The cat learns the lesson of trust along with her new owner.

She watched as the speckled cat started up the steps toward her. “Good evening, Ember. Your supper awaits, but you’ll have to come past me to get to it. I promise not to touch you.”

The cat stopped midway up the stairs, her green eyes stretched wide. Then she darted past Vivian. It was the closest she had ever come before, and it felt like a victory.

Vivian jumped a little when an unexpected furry body rubbed against her elbow. The cat had doubled back to press against Vivian’s arm. She eased her hand out and Ember rubbed against her fingertips. This was proof that the cat didn’t start out wild. Someone had mistreated her, which had made her shy away from other people as a way of protecting herself from it happening again.

The cat moved toward the railing away from Vivian. She wore a satisfied look now—almost like she was smiling. Then she darted on up to the porch to enjoy her meal.

Vivian’s skin tingled in amazement. She rubbed her arms, trying to dispel the goose bumps. It was as if God had sent the cat and let her experience this moment so He could show her a reflection of her own life. A man had deeply hurt her—one she had trusted and loved. But just as Vivian wasn’t anything like the one who had hurt Ember, every man out there wasn’t out to do the same to her.

What about you? Any pets? Are there any fictional pets that have left a memorable impression? One commenter will win an ebook copy of Heart’s Desire. 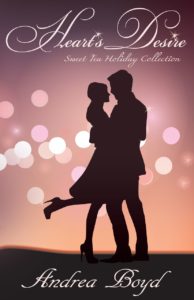