Scott put down the tray in front of him and set the two drinks on it carefully. He was still trying to understand Jenna, this beautiful, exotic creature, who had so thoroughly captured his attention in less than a heartbeat. He hadn’t known her for thirty minutes, but something about her captivated him, and he wanted to learn everything he could about her before they landed.

“So, you are going to Newark?” Jenna asked before he could say more.

“Harrington Park, actually.” Scott settled the drinks in front of him. “It’s a little town north of Newark.”

“Never heard of it.” Jenna took a sip of her drink. At first she sat back, but then her gaze came over to them.

Scott wished he was better at the parent thing. He felt like he had three thumbs trying to get things in place. “I’m not surprised,” he said with a laugh as he worked to get Lane’s drink settled on the little tray. “It’s just a little spot on the map, but it’s home to us.”

Jenna nodded and exhaled slowly. She took another sip and turned her gaze from them. Silence fell between them, her sipping, him trying to look semi-competent. Even as his hands held both cups on the trays, he tried to find a neutral topic to continue the conversation. Not wanting to scare her off by staring, he glanced out the window on the opposite side. Instantly he noticed how dark it had become beyond that window. Instead of flying above the clouds, they were in them, and it was much darker than it should have been for this time of the afternoon. He took a sip wondering what that meant. The plane shook again, a little more violently this time, and his concern was back for his son.

“So,” Jenna said, letting out a hard breath. “Do you have any pictures of Lane?”

Scott’s mind and emotions slammed into the request. “Pictures?” Then he laughed, relaxing. “Are you kidding? This is the most photogenic kid in the world.”

Jenna smiled and turned to them, curling in the seat just a bit as he pulled out his wallet, being extra careful not to spill the drinks. He opened it, handed it across to her, and then went back to giving Lane some of the soft drink. However, he never really took his attention from her as she spun the wallet carefully and stopped when she came to the first picture. She studied it. It was a hospital shot of him holding Lane—looking every bit the proud father. He remembered that moment like it was five minutes ago.

“When’s his birthday?” Jenna asked, sounding very far away as she studied the photo.

“Two and a half,” Jenna said, smiling to herself as Scott watched her between Lane’s sips. She turned the page over. “Oh, how cute.” She held the next one up for him to see. It was one of Lane holding a plastic bat. “So, he’s going to be a baseball star, huh?”

“We hope.” Scott shook his head. “That’d make my old man’s day.” He peered over his son’s head trying to look at her and the photo she came to next simultaneously as he gauged her reaction to each. She really was beautiful, he thought as he watched her. Mesmerizing with that dark hair and the pale-olive skin.

“What’s this?” She came to one with Lane and a tiny guitar. “He’s going to be a musician, too? Wow. You are one talented little boy,” she said to Lane. As though he understood her perfectly, Lane looked up, smiled, and giggled.

Scott looked down at his son and laughed. “Clearly he’s not yet learned the fine art of modesty.”

Jenna laughed too as she flipped the page. “It’s all right, when you’re this good-looking, who needs modesty?” She picked up the next picture. It was Lane’s two-year-old picture, and it was one of Scott’s favorites.

The laugh came naturally. “Well, you have a point, there. Just don’t tell him that, okay?”

However, with the next flip of the page, all levity left her. There they were in living color—Scott, his wife, and Lane. It reminded her of a very similar photo that had stayed behind on her own dresser.

“She’s pretty,” Jenna said, barely masking her thoughts as she stared at the photo.

“Yeah.” Scott looked at the photo over Lane’s head.

“What’s her name?” Jenna asked, trying not to sound too disheartened. What was it about that picture that so shredded the air from her lungs? The idea that he was married or the thought that he had what she had lost? 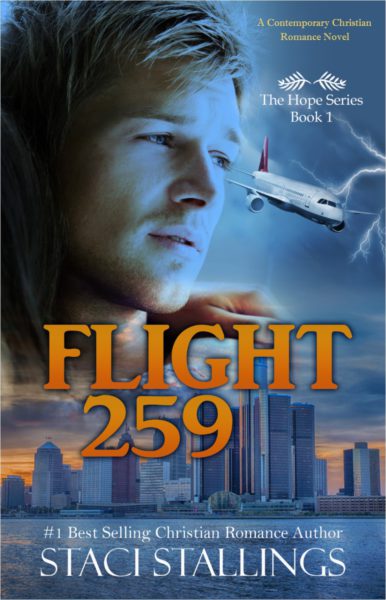 Start the Journey Today…
Click on the Cover to Get Your Copy!
Also on Kindle Unlimited!

No more words would come. It was all Scott could think of to say. Should he tell her more? If so, what? He wasn’t sure how much he should say if anything. How much are you supposed to tell a complete stranger about the gory details of your love life? Especially a beautiful stranger who you would like to get to know better. It wasn’t a question he had thought of until now, and now he wasn’t sure.

At that moment a deafening noise split across the space twined with a blinding flash of light that erupted, illuminating everything for a surreal second. The plane pitched to Scott’s side without warning, and he slammed against the window as screams exploded everywhere around them.

Excruciating pain sliced through his being. The empty cups bounced from his hands as he grabbed for his shoulder, agony ripping through him even as he forced himself to turn to his son. “Lane!” he yelled, the drinks now dripping from his hands as he reached for his son, only one arm working reliably. With one look, the abject terror in his son’s eyes froze his blood. “Lane!”

Mind-splitting noise reverberated around him from the screams, the plane, and the fury of the storm. The plane shook with a vengeance, rattling everything as a deafening roar emanated from everywhere at once. The lights went out, plunging everything into a dim semi-darkness. Dipping violently once more, the plane threw Scott back into the window smashing his shoulder and head into the plexi-glass with such force blacking out became a real possibility. Pain slashed up and down him as if someone had torn his shoulder completely off. He struggled through the blinding pain to right himself even as the plane continued to tip and toss. He had to help Lane. He had to get to his son…