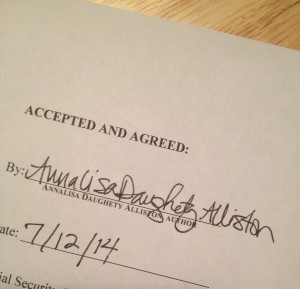 Those of you who are familiar with my writing journey know that I took some major time off over the past couple of years. After 11 books releasing over a 4 year period, I took time off to (as my grandmother suggested) live life instead of writing about it.

And today marks the one year anniversary of the day my husband proposed–so obviously I heeded her advice!

I decided a few months ago that it was time to start writing again…and honestly I was nervous. I was worried I’d taken off too long. What if the words no longer came? What if I was out of ideas?

Thankfully those fears have been put to rest and I’m so pleased to announce that I’ve signed with Guideposts to write a new continuity series! Six other authors and I will be writing the series–a cozy mystery series set in Ohio Amish country. We’ll each write different titles–but the same characters and setting. It will be so fun to collaborate!

The first book in the series will come out next summer. I’m not totally sure when mine will come out–but I’ll certainly keep you posted!

As this school year starts and students and teachers are in the beginning stages of their year, I’m at the same beginning stage of my novel. I worked on my writing calendar last weekend and this week I’m jumping into some plotting.

It feels great to be writing with a purpose again!