He was never much of a reader, although I read to him often. When he traveled, I’d send him off with cassette tapes… You know what those are, right? They’re rectangular things a little bigger than a deck of cards with reels and ribbon inside, ribbon that inevitably became a tangled mess. 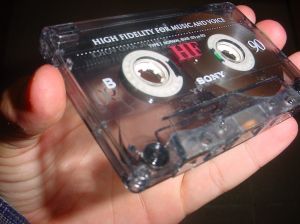 On those tapes I’d recorded myself reading a story.

Because I had some odd notion he’d want to listen to my slightly overly dramatized voice for twelve or thirteen hours.

Poor guy. But he never complained, and he always returned.

One day I decided to try storytelling. I had no thought of publication. I wrote for enjoyment, a way to unleash all the words that had built while folding laundry and raising our daughter. So what’d my over-tired, over-worked, slightly stressed, railroad director husband do?

I know what he wanted to do–zone out to ESPN. But he didn’t. Rather, he’d snatched up our giggly, energetic 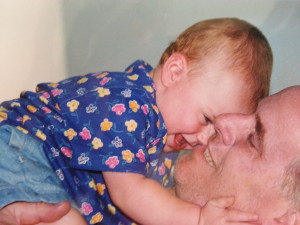 daughter, and whisk me upstairs so I could work on a very exciting political espionage story.

Yeah, so it wasn’t so exciting, and no, you’ll never see it in print, (thank goodness!) although it did scare me into calling the cops . (Don’t ask. Okay, do. I’ll share the details in the comments. :) )

Fast forward to last October, and I received my first novel contract. I bet you know who I told first–the man who stood beside me, believed in me, and saw a future for me in this writing industry long before the notion flashed on my radar. When everyone else called it a hobby, long before I’d earned a dime, my husband treated it like a career.

Do you have any idea how empowering, how inspiring that was? In case not, I’ll tell you. It inspired me to keep on going even when computers crashed, hard critiqued came, and characters fell flat.

And thus, my genre–missional romance–was born. Because I wouldn’t be published today, wouldn’t be serving in the places I am period, if not for my husband. From children’s ministry to outreach to this thing called writing, we’re a team. (In fact, he helped develop the storyline of my sophomore novel, scheduled to release sometime in 2015. Now that was romantic!)

Isn’t that what true love is about? We’ve heard it so much, it’s become cliché, but for a reason. True love, as God designed it, should bring out the best in another.

To bring out our lover’s best, we must engage, as my husband’s done with me.

Isn’t that what we long for, ladies? For our husbands to become engaged in that which is important to us?

But before you’re tempted to think, “Why doesn’t my husband do that for me???” allow God to flip things for a moment, taking the focus off of you and placing it where it belongs, on Him and your loved ones.

Ask yourself, how might God want me to show that kind of love to my spouse? How can I encourage, uplift, and support him, regardless of how valuable I find the event or if I think anything will come of it?

There are countless ways we can bring out the best in our husband. Here’s my suggestions. I’d love if you’d share yours. :)

*Speak words of praise and encouragement rather than nagging and criticise.

*Focus on our spouse’s potential rather than their faults.

*Support their “hobbies” even if they seem a waste of time and in so doing. Perhaps even go a step further by joining them! You might even surprise yourself by having fun, and you’ll make him feel like a king in the process.