This is the third year in a row in which my husband and I have taken a trip overseas, this time to Spain and Portugal with a day-trip to Morocco thrown in. The flight from Boston to London Heathrow begins with a cool photo from the plane. 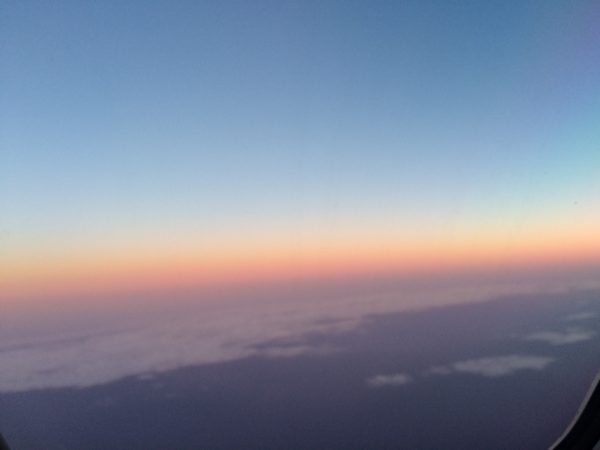 I’m going to share some of the fun things that happened as well as the problems. We arrived in Madrid the next morning, or at least it was morning in Spain. At home it was the middle of the night. I got about three hours of sleep on the plane, so staying awake for the next twelve hours was a challenge.

The first thing we encountered on our trip out of Madrid on our way to Barcelona was a rental car with instructions in Spanish and French. It did have a GPS guidance system, but it took us a third of the trip to figure out how to get the instructions in English. A lovely British lady led us through Spain and Portugal. “Enter the round about and take the third exit.” I can still hear that voice. 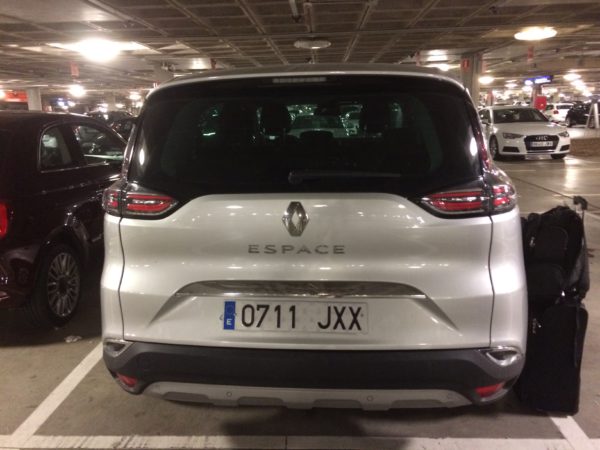 Driving and parking on narrow streets was definitely a challenge. How would you like to drive this car down a street like this? 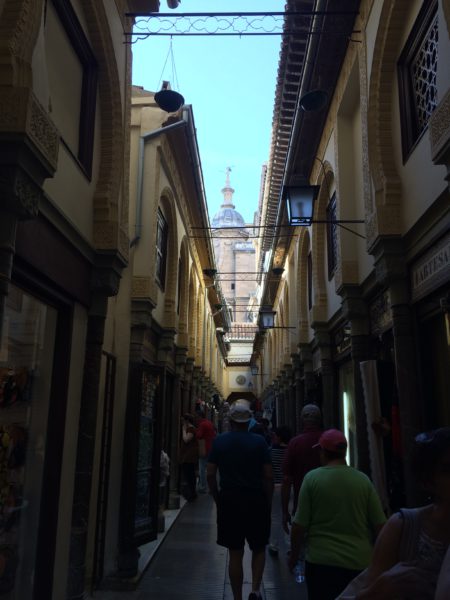 Food was sometimes a challenge. We had wonderful tapas in Spain, but I also had calamari that was so tough I couldn’t bite through it. Thankfully, the waiter took that off our bill. Below is a sample of a tapas plate we enjoyed, especially the croquets. 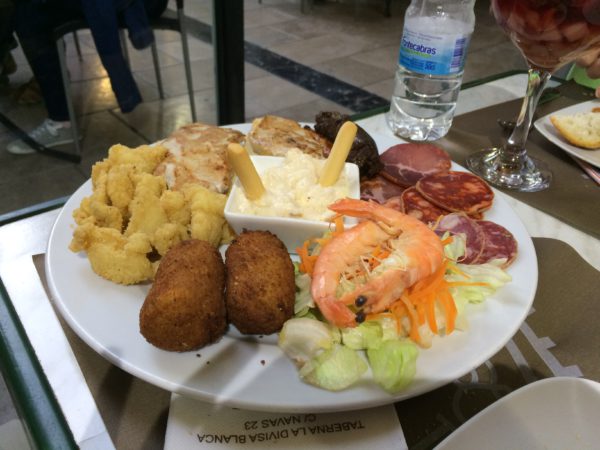 One particular day when we were traveling between cities, we stopped in a small town to get lunch and have a bathroom break. Little did we know that no restaurants were open because it was Monday. There were little bars open, but they didn’t have food other than olives and some other things we really didn’t want to eat. Thankfully, they let us use the bathroom, which was also sometimes a little humorous. They are very conscious in the EU about conservation, so lights only come on in the bathroom when you enter, and sometimes they go off before you are done. It is pitch dark, and you can’t see a thing. One time I was waving my hand in the air every thirty seconds in order to keep the light on. Soap, toilet paper and a hand dryer that actually dried your hands were often in short supply in public restrooms. We finally wound up eating our lunch in the parking garage where we had parked our car before walking into the center of town. We bought a loaf of bread and a few apricots to add to the cheese and olives we had in the car. Here we are enjoying our meal in the parking garage. Dining at its finest! 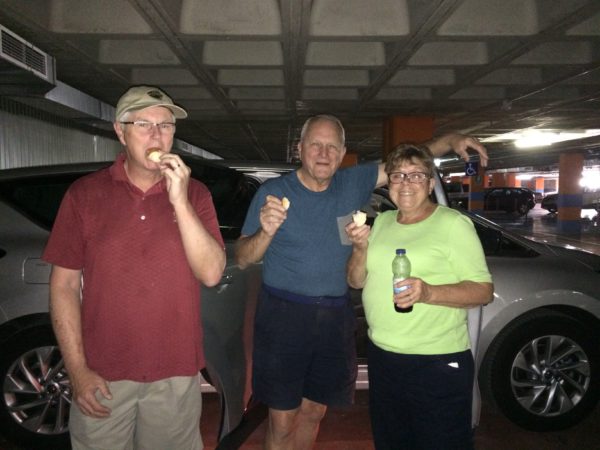 When we were in the big cities, we used public transportation, especially the subway system. That worked pretty well most of the time. We had one lapse when we went into the subway station the wrong way, and there was no way to get to the other side of the tracks except to go out and buy another ticket. In Lisbon, we bought a Lisboa card and used it on the train, subway, and buses. It was great until the last day our friend’s card quit working, and we had to double up to get him through the gates until we were able to get to a tourist information station to get him a card that worked.

We walked a lot, laughed a lot, and climbed a lot of stairs. I got to ride a camel in Morocco. His name is Mustafa. It was rather a bumpy ride. I can’t imagine riding one for very long. 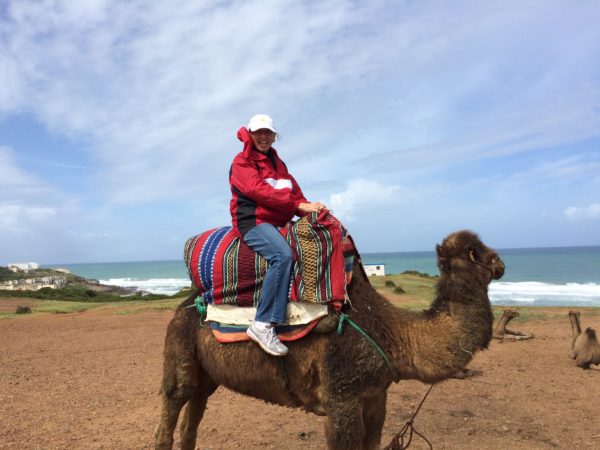 We stayed in two places with incredible views. The first photo is a picture I took from the patio of the place where we stayed in Tarifa, Spain. You are looking across the Strait of Gibraltar to Morocco. The second photo was taken from the balcony of the place we stayed in Belem, Portugal, a suburb of Lisbon. 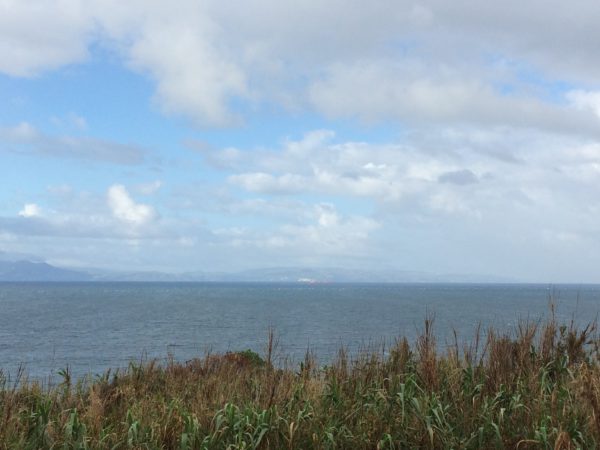 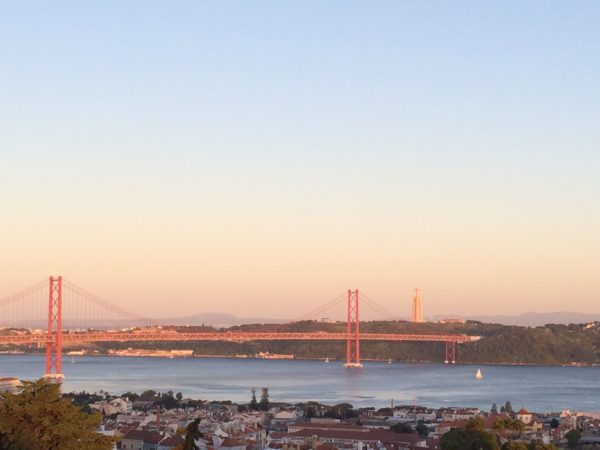 I have a lot of other photos and experiences to share. Please visit my Facebook page where I am sharing more photos in the coming days.

What travel challenges have you faced?

I’m giving away an e-book copy of the first book in my Front Porch Promises series, A PLACE TO CALL HOME, to one person who leaves a comment. I will draw the winner’s name on May 30, 2017 at 9PM MST. 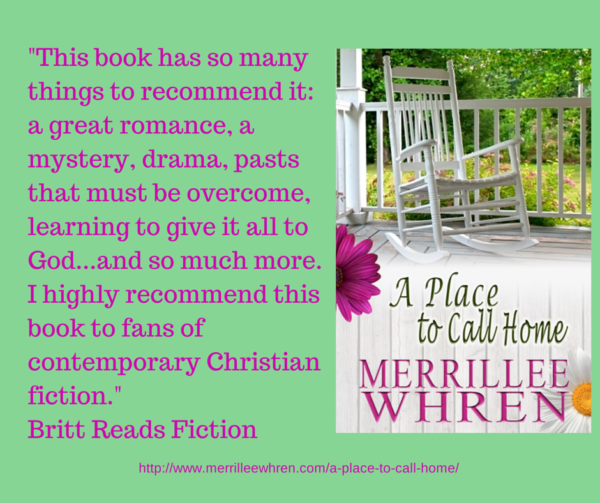