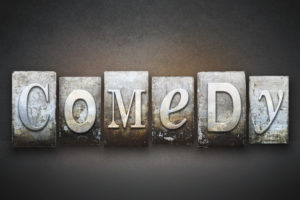 I am a fan of laughter.

I look back over my life and some of the toughest seasons were made a little more bearable through laughter.

July 2010– My 4th daughter was born with half of a heart. I remember after her first open heart surgery, things had gone “okay” and we were waiting to see her, but I was a bundle of nerves. I was about to see my child with a large cut down her chest, a breathing tube in her mouth, and all sorts of tubes protruding from her body. I was scared out of my mind. Our new pastor came to visit (literally, I think this was the first time I’d actually met him), and I have this vivid memory of sitting in the waiting area, talking with him and my sister, telling funny stories about our past and laughing way more than was appropriate for the situation. I later worried he would think me some crazy, emotionally disturbed woman.

But I needed that laughter SO BADLY in that moment. God knew that, as the days to come got so very, very much worse.

April 2011 – That same daughter was STILL in the hospital. She’d never gotten well enough to come home, and she’d been on the heart transplant list for the past 4 months. We’d received a call that morning that a heart was available to her. That evening, she was in surgery, and my family and I had the whole OR waiting room to ourselves. It was late and my other kids were stretched out on chairs asleep and all I could think about was the fact that doctors were literally taking my child’s heart out of her body and putting the heart of another child, who had just died the prior day, in. There is NOTHING funny about that. But my sisters? Oh I love them so much. They did crazy photoshoots to make me laugh, told jokes, and one of my goofy sisters even used the OR room intercom to make a slightly crude announcement about the other.

While I know this sounds wildly inappropriate, it got me through that night and the laughter was sweet medicine to this momma’s soul.

Those months, I INHALED books that were funny. I literally threw at least one book across a hospital room because it was about a dying woman, and I just couldn’t think about dying right then when my child might very well have the same fate.

A few months ago, I received a message from a grandmother. She was busy watching her grandson while her son and his wife were at the hospital with their baby daughter who had the same heart defect as Annabelle. She sent me a long message, but here is a tiny part I wanted to share with you. “I snuck time out to finish your delightful story “A (Sorta) Southern Serenade”. It just felt so good to get caught up in a spunky, fun, novel that made me laugh out loud. We need laughter these days!”

This. This is why I love writing fiction that makes people smile. Because on hard days, sometimes the very thing we need is laughter. It’s a vent for the soul, just like crying is, in my humble opinion!

AND in honor of laughter today, I’m SUPER SUPER happy to announce an upcoming box set filled with 100% romantic comedies!! The level of comedy will vary in each, some with make you smile, some giggle, and hopefully some will make you grab your side as tears of laughter roll. That’s our hope anyway. Whether you’re having a good or a bad day, we aim to AT LEAST bring a small smile to your face and point you a little closer to Jesus.

It will release in March, but here is a sneak peek of the cover!! 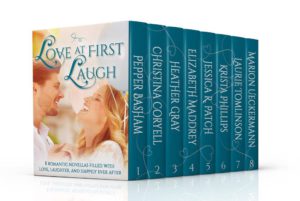 Let’s Chat! What are some of your favorite “funny” romance reads? Or a story about when laughter helped you through a tough time?