I love to watch a reality game show here in Australia called ‘My Kitchen Rules.’ It is based around cooking and sometimes, teams have to face each other in ‘sudden death cook-offs.’ The stress of watching this gets me, and many other viewers, feeling very anxious for them.

As they watch their meals being carried out to the judging panel, the contestants sit in a waiting bay. Looking pale, they twiddle their thumbs and shuffle their feet. What they say for the cameras during this waiting time is most revealing as far as their states of mind are concerned.

‘We’ve done the best we could, yet I can’t help feeling that we might have been a bit heavy-handed with the spice. Maybe we weren’t generous enough with the sauce. Or perhaps it is tasty, but doesn’t look good enough. What if they tell us our plating up is too sloppy?’

At the end of all this musing, they almost always say, ‘Well, we did the best we could, and now it’s out of our hands. It’s just a waiting game.’

I’ve been in a similar place recently with my latest novel. When the final edit was complete, I sent some advanced review copies to influencers. Whenever I send one on its way, my heart is in a flutter. Those readers, and later the general public, remind me of the judging panel, and I feel as if I’m sitting in a waiting bay until the feedback begins to roll in. While I’m waiting, similar questions filter through my head to those the cooking contestants express.

‘I’ve done the best I could, but did I get all the ingredients right? Is the mystery element well-balanced? I hope I haven’t been too heavy-handed with the faith aspect. I want to tantalise and not over-power. Do the suspense and romance go together well in this story? Even though I think it’s a good balance, others may disagree. What about the characters? Do they stand up as the heroes of the dish? Well, at least I trust that the plating up is good. I love the cover design my publisher came up with.’

In the end, it all boils down (to use another cooking pun) to the same conclusion. ‘I’ve done my very best, and now it’s a waiting game.’

Sometimes, I appreciate being reminded that the impression of being alone, waiting for judges’ feedback, is just an illusion. For one thing, it’s not all about the author anyway. I’m sure fellow fiction authors will agree with me. We weren’t on our own when it came to the conception of our stories and the themes at the heart of them. ‘Imogen’s Chance’ is my ninth novel, and I love to think that the hand and spirit of God is guiding me in everything from the germ of an idea to the final stroke of editing.

To keep the cooking analogy going, I remember a passage I read in ‘The Sound of Paper’ by Julia Cameron. She sets God Himself in the role of head chef. He takes a great interest in our writing projects and also bears the responsibility of helping us touch the hearts He knows will be most responsive to our writing, and most need the special dish we have to offer. We ourselves are more like the kitchen hands who chop the carrots. That way of looking at it instantly takes a lot of stress off an author’s shoulders, while we’re in that waiting bay. ‘I’m not the head chef, but I know He’s on my side.’

I hope you do enjoy the blend of ingredients in ‘Imogen’s Chance.’ It’s my desire that the complementary flavours will enhance each other, and there are many elements in this book. They include romance, healing, making amends and facing the past. And of course, in many dishes there are secret ingredients. There are secrets in some novels too. My heroine has a secret which compels her to take action, and the hero has some secrets of his own, making it just that bit more spicy. Hopefully the recipe will please the palettes of many readers. 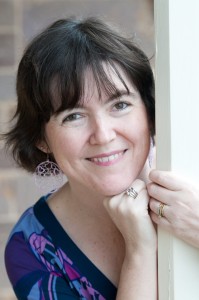 Award-winning author, Paula Vince loves to evoke tears and laughter through her novels. A wife and homeschooling mother of three, she resides in the beautiful Adelaide Hills of South Australia. Her youth was brightened by great fiction and she’s on a mission to pay it forward.

Her novel, Picking up the Pieces, won the religious fiction section of the 2011 International Book Awards.

Her novel, Best Forgotten, was winner of the 2011 CALEB Award in the fiction category and also recognized as the best overall entry for the year, chosen over memoirs, devotionals and general non-fiction.

Paula’s books are a skillful blend of drama and romance tied together with elements of mystery and suspense.

Find out more at www.justoccurred.blogspot.com

Paula is the author of Picking up the Pieces, The Risky Way Home, A Design of Gold and Best Forgotten. Her new novel, Imogen’s Chance, will be published in April, 2014.
Paula is also one of the four authors of The Greenfield Legacy

Narelle here. I’m delighted to welcome my friend Paula Vince to our blog today. Paula is giving away two copies of Imogen’s Chance to two lucky readers. To enter the giveaway, please leave a comment on this post and complete the Rafflecopter form below. Carol will announce the winners in our post on Sunday. 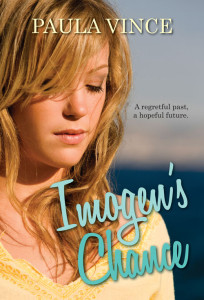 She has given herself a chance to fix her personal history. But will old mistakes bring up new emotions?

Imogen Browne longs to make up for past mistakes before she can move on. She quietly resolves to help the Dorazio family, whose lives she accidentally upset. Her biggest challenge is Asher, the one person who may never forgive her. And he is facing a crisis of his own. Imogen must tread very carefully, as trying to fix things may well make them shatter.

A sensitive story about misplaced loyalty, celebrating life and falling in love. Can family secrets concealed with the best intentions bear the light of day?