When I say that God directs my writing, I mean just that.  He decides what I write when I write it and how I write it.  Sometimes that’s very comforting, and sometimes it makes an author just a little…

Well, here’s the story.  You tell me what it would make you!

It all started when I got a fabulous idea for a book.  We’ll call this one “Original Story.”  Now, when I write, I try to immerse myself in the characters–what they are like, how they look, what they love, the kind of music they listen to.  In doing so, I download pictures off the Internet and make a soundtrack for the book.

The glitch I didn’t see coming (but I know God orchestrated) came in the form of the young lady who was my newest and most fascinated fan at the time.  She was the babysitter for my kids, and she had recently read several of my books.  So when “Original Story” started being written, she was interested.  I mean, coming in here to see the pictures, how many pages had I written, how was it going, when would it be finished interested.

Then a funny thing happened.  As she looked at the pictures, she started “falling for” one of the other guys in the band.  She kept asking me, “Yes, but what is this guy’s story?”  I gently told her that it didn’t work that way, and that I was working on “Original Story” and didn’t have time for anything else.

Well, she kept it up until just to shut her up, one day, I said, “Okay, God, if I was to write this other guy’s story, what would it be?”  Now, I had assumed God would be quiet on the matter so I could work on the story I was already working on.  I assumed wrong! 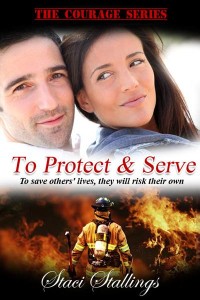 Upon asking the question, “To Protect & Serve” the story dropped into my lap–nearly fully formed.  I was not the picture of happiness at that moment. Now what? I was already writing a story, and it was a really good one.  But, I’ve learned, when God shows up, you don’t argue.

So within a few days I was standing in our local fire department that’s only a couple miles from my house—about as far out of my comfort zone as I could get, learning all kinds of new things like the best way to cut roof-vents on houses that are burning down under you and where the pickax is stored on the truck, how turnout gear is laid out so you can get into it quickly and the importance of a little thing called a PASS.

That story, “To Protect & Serve” became the first of the three stories in The Courage Series (followed by “White Knight” and then “For Real.”)

I’m hoping someday I will finish “Original Story.”  It’s now been 11 years, and I’m still working on it.  Don’t ask me.  I’m just along for the ride!

Get your copy here!