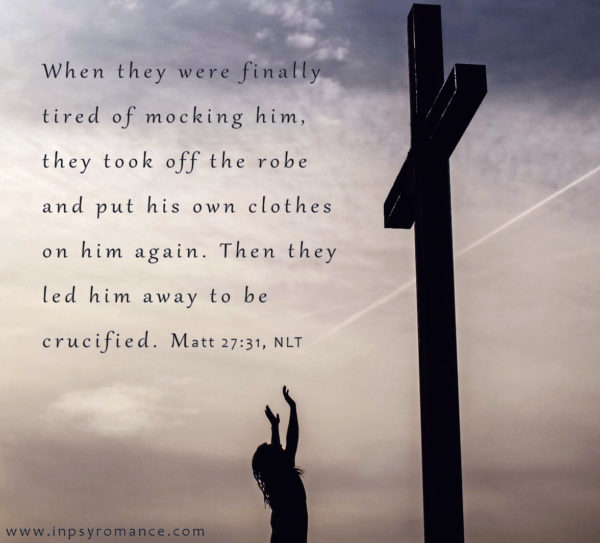 Thank you for stopping by InspyRomance. We are closed today to commemorate Good Friday. Remember His sacrifice, which freed us from our sins.

“Then Pilate had Jesus flogged with a lead-tipped whip. The soldiers wove a crown of thorns and put it on his head, and they put a purple robe on him. “Hail! King of the Jews!” they mocked, as they slapped him across the face.

Then Pilate turned Jesus over to them to be crucified.

So they took Jesus away. Carrying the cross by himself, he went to the place called Place of the Skull (in Hebrew, Golgotha). There they nailed him to the cross. Two others were crucified with him, one on either side, with Jesus between them. And Pilate posted a sign on the cross that read, “Jesus of Nazareth, the King of the Jews.” The place where Jesus was crucified was near the city, and the sign was written in Hebrew, Latin, and Greek, so that many people could read it.

Jesus knew that his mission was now finished, and to fulfill Scripture he said, “I am thirsty.” A jar of sour wine was sitting there, so they soaked a sponge in it, put it on a hyssop branch, and held it up to his lips. When Jesus had tasted it, he said, “It is finished!” Then he bowed his head and gave up his spirit.