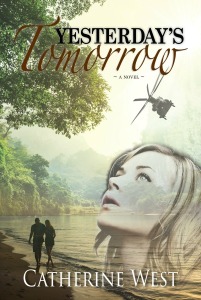 write this blog post. Cathy West is talented and fun. I’m excited that Cathy has launched an updated Kindle version of Yesterday’s Tomorrow (new cover, new scenes).  To this day, I can still recall some of the scenes from this novel, which I first read back in 2011 —  Cathy’s writing is that powerful. Today Cathy is sharing about “An Epic Love Story”:

I don’t know about you, but I smile wide when I find a thick novel that spans years, sometimes generations, and spins a tale rife with drama, intrigue and of course, romance. I’ll find a quiet corner, curl up in my favorite chair and shut out the world until I get to the end.

I was thirteen when I first read Gone With The Wind. I devoured it. I couldn’t get enough. I loved Rhett Butler, even though I thought his name suited him quite well because there were times were he was a bit of a butt. And that Scarlett. I just wanted to slap her silly. If I told you how many times I’ve watched the movie, you wouldn’t believe me.

But that’s the kind of epic love story I’m talking about. The kind that grips you from the first page and doesn’t let go, even long after the last page is turned. Those are the kinds of novels I love to write. Because, let’s be honest, who doesn’t love a great romance? Isn’t there just something heart-stopping about two characters seeing one another for the first time? You can feel the dynamic tension crackle through the page – the way he looks at her, eyes slightly shifty, stance a little stiff, not wanting to give too much away, and she’s all like oh my word I can’t even breathe right now…and neither can you. You know they can deny all they want, but they so belong together and you’re practically on the edge of your seat waiting for that moment when they finally, finally realize it! Ah, romance. I love reading it, I love writing it.

And just to emphasize the point, I thought I’d share one of my favorite scenes from Yesterday’s Tomorrow with you. It’s one of Kristin and Luke’s ‘ah-ha!’ moments.

Luke’s smile was sad as he brushed away her tears with the base of his thumb. “What do you want to do, Kris?”

“Good. I want you to.” The soft declaration settled in her soul, nudging it ever so slightly toward hope. His hands moved her hair out of her eyes, and came to rest around her face. He pulled her closer and placed his forehead against hers. He sighed, soft and low, as though he’d given up the fight. And then his lips claimed hers. His kiss was sweet and lazy, left her breathless, and longing for more.

And hopefully my reader is left longing for more too. ;) But that’s just one kind of romance, the love that grows between a man and a woman. There’s also another kind.

As we weave our stories and draw others into the worlds we’ve created, let them love our characters as we do, we’re sharing something special. Something sacred. These love stories we write, although fictional and physical, can mirror the spiritual love story we live out each day with the One who made us who we are. The One who gives us the gift of the words we weave.

He woos us, waits for us, loves us with abandon, and never, ever lets go. Even when things are as black and bleak as they could be. Can you imagine that kind of love? Truly fathom it? Incredible, isn’t it?

That’s the real epic love story I want to write. One that points toward hope and such an incredible love we’d almost doubt the truth of it if we didn’t know it in our souls. 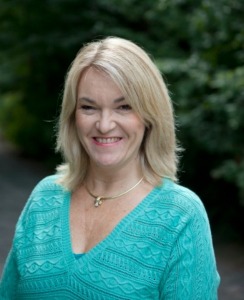 When she’s not at the computer working on her next story, you can find her taking her Border Collie for long walks or tending to her roses and orchids. She and her husband have two grown children. Catherine is a member of American Christian Fiction Writers and Romance Writers of America, and is represented by Rachelle Gardner of Books & Such Literary. Catherine loves to connect with her readers and can be reached at Catherine@catherinejwest.com.