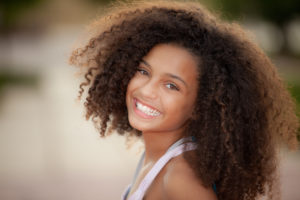 Do you like your hair? Do you fuss with it every morning? Do you wish you had a magic formula for perfect hair?

As an African-American woman, I’ve always fought with my hair. I recall long days of my mom trying to tame my kinky hair. I also remember, when I got older, that I started going to the beauty parlor. I had my hair permed so that it was shiny, straight and easier to manage.

When I read Deb Raney’s Above All Things, all of those memories of fighting with my hair, especially as a child, came rushing back to my mind. Above All Things is about Judd and Evette, a happily-married Caucasian couple who is expecting their first child. When it’s discovered that Judd has as a bi-racial young daughter, their world changes drastically. Judd didn’t realize he’d fathered a child and now his help is needed to raise his daughter, Jolie.

I really loved the book! The characters were so vivid and so REAL. I could just imagine them so well in my mind. I also LOVED how Deborah showed how hard it was for Evette to care for Jolie. She didn’t realize that there were certain things that needed to be done care for Jolie’s African-American hair. Just washing poor Jolie’s hair was a battle for both of them. I felt the hair battle was symbolic of the fight going on for both characters. Both were going through great stresses in their lives and they were doing the best they could to deal with their pains.

Overall, this was a great, satisfying and emotional Christian read!

This is the blurb for Above All Things:

They were on their way to being a real family…until she came into their lives.

Expecting their first baby, Judd and Evette McGlin are thrilled at the prospect of becoming parents. But their marriage faces the ultimate test when Judd learns he already has a child: a six-year-old bi-racial daughter, born amid secrets and lies. Now, Evette must decide if she can accept the child—and forgive Judd. She thought she was open-minded—until hidden prejudices threaten the future of an innocent little girl, Evette’s marriage, and the very notion of the woman she’s believed herself to be. Above all things, this child needs acceptance and love. Needs Evette to discover what being a mother truly means. Needs Judd to face his past. And needs them both to discover what it truly means to be a family.

If you haven’t read this book, then you should!

So, do you like your hair? Do you ever wish you could change your hair in some way? Do you spend a lot of time styling your hair each morning?

I’d love to hear from you! Let’s talk about hair!