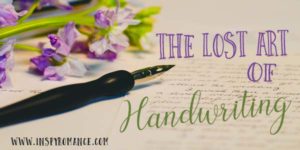 How many of us still write handwritten notes to friends and loved one?

I’ll have to admit that over the years, I’ve begun to slack on this skill. Though I still write longhand in my journal, and I write notes for stories on paper first. Back when I first started writing, I’d pen my who story in a leather journal before putting it onto the computer. It made me feel so writerly, I guess. Ha!

So, why a National day for handwriting? Well, I went to Mr. Google and asked and this is what came up from nationalday.com

National Handwriting Day was established by the Writing Instrument Manufacturers Association in 1977.  Their motive is to promote the consumption of pens, pencils and writing paper.  January 23rd was chosen as this is the birthday of John Hancock.  John Hancock was the first person to sign the Declaration of Independence.

With computers being much faster at getting our thoughts down, you might wonder why it’s even worth mentioning this day. Well, I did a bit of digging around and found a few reasons…

Okay, so there are some reasons given by 8 Ways To Celebrate National Handwriting Day,  which also offers some neat ideas on how to make the most of this special day.

How do I keep my handwriting skills fine-tuned?  I don’t often write people, except for emails, but maybe I should. Especially such things as cards and thank-you notes. As I said before, I journal almost daily, take notes at church and my planner is full of notes on ideas, plans, tasks and other things I learn and don’t want to forget.

I handwrite my outlines.

I sometimes handwrite a scene from a book. Or at least a sketch.

Oh, and my grocery lists. I still handwrite those out, even if there are nifty apps to take care of those.

How about you? Have you given up handwriting for typing? Dictation? Or some other form of communication? We can always text or make a call, right? Do you enjoy collecting pretty pens and paper? I just want a pen that doesn’t smudge, mostly, but the other day I did see this feather quill at Barnes and Noble that I told my son he had to get me for my birthday. Ha-Ha!

Until next month, happy reading… and writing!