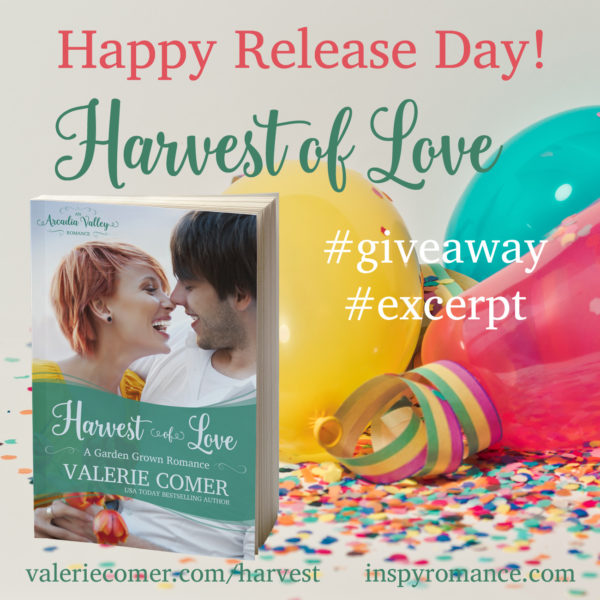 Bringing a series to a close is always bittersweet for an author, and today is no exception for me. Bitter because I’ve “lived in” Arcadia Valley for over two years while my co-authors and I developed the multi-author series concept and then wrote it, and I’m SO going to miss the town and all these fun characters! Sweet because I have no shortage of new ideas and will be launching a new series this fall… while continuing to write the Urban Farm Fresh Romance series.

Harvest of Love is my final contribution to Arcadia Valley. I’d like to share half of the first chapter with you today — there’s a link to the entire first chapter at the end of the excerpt. A longer preview is available at Amazon, or, you know, you could buy the novel and read the whole story TODAY!

Kenia Akers shifted from one foot to the other at the back of the huge Bigby barn. She shouldn’t have come to the benefit concert, but it had seemed even more lame to stay home on Valentine’s Day when she’d been planning to attend for weeks. She’d dumped Jonah yesterday, but that was no reason to let her ticket go to waste. Maybe he’d use his for a bookmark… if he even had time to read since he was obviously pursuing Gloria Sinclair again. Jerk.

Wasn’t it just Kenia’s luck? Meet an adorable guy like Jonah Baxter on Christmas Eve, be wooed with whirlwind dates, only to discover he was still in love with someone else on February thirteenth?

She should’ve waited until after the concert to send him packing. At least she would have had one perfect Valentine’s Day to remember. She’d have been here on the arm of one of the cutest, sweetest men she’d ever met instead of solo with half the town wondering about the demise of her short romance.

Kenia choked back a snort and tipped her chin up. Right. A perfect Valentine’s Day, knowing he loved someone else?

On stage, Cole Anderson stood alone in the spotlight with his guitar as the elderly granny who’d sung the last song with him made her way down the steps and into the hushed audience. The spotlight divided, part of it coming to rest on Allie Bigby, the beneficiary of tonight’s concert and silent auction. It sure stunk that Allie’s lavender barn had burned down early Christmas morning. Then there’d been some glitch with her insurance. Arcadia Valley had pulled together to help raise the funds for rebuilding.

The mood shifted in the barn in that one long moment as Cole gazed down at Allie and Allie gazed back, her lips slightly parted and her eyes shining.

No way. There was only one thing that could be coming next, and it wasn’t something Kenia wanted to witness. She pivoted for the door, only to discover she was blocked in by a wall of bodies. “Excuse me, please,” she whispered once, twice, ten times as she edged toward the cold wintry night.

Cole’s voice pushed into Kenia’s consciousness. “Allie told me she loved me today, and I think you all know I love her, too.”

Freedom beckoned from two people away. Kenia ducked between them, but one shifted and she connected with a hard elbow to her shoulder, spinning her sideways.

A warm hand caught her arm, steadying her, as startled eyes swung to meet hers. “I’m sorry. I didn’t see you there.”

Kenia stared into the gorgeous eyes of the man a few inches from her and tried to remember her words. His brown hair in need of a cut and his scruffy chin in need of a shave gave him a bad-boy image, unlike Jonah, Mr. Perfect.

Immeasurably better than a proposal, but no doubt one was coming. This song was only a reprieve but, knowing Cole and Allie’s history, he’d had years — decades — of unrequited love to pen at least twenty-five stanzas.

That didn’t mean she should stand here like she’d been struck by lightning staring at a total stranger until Cole’s final strum.

“Excuse me, please.” Too bad she couldn’t muster anything other than a breathless whisper.

A grin crinkled his face and warmed those eyes just as the heat of his hand left her arm.

Kenia yanked her gaze away and pushed open the barn door. Outside, icy air chilled her heated cheeks as she dashed across the crowded parking area to her car. A motion sensor blinked a light into action, cutting the view of the smattering of stars that bravely attempted illumination of the dark night.

With shaking hands, Kenia stuffed the key in her ignition, started her Ford Fiesta, and drove away from Bigby Farm. Whew. At least she’d missed the proposal. Sure, she was happy for Allie. She’d known the woman since high school. If anyone deserved to find true love and happiness, it was Allie.

Only… why not Kenia? Why had she wasted six weeks dating a man who couldn’t stop dreaming about another woman? There’d been niggles of doubt, but she’d ignored them. She’d known Jonah’d had a thing for Gloria Sinclair for several years, but it had never gone anywhere. Kenia hadn’t thrown herself at him. He’d been the one to invite her to his brother’s wedding. He’d been the one to hold her close while they danced, who’d kissed her, albeit briefly, at the stroke of midnight on New Year’s. He’d been the one who’d invited her to his family dinners, cooked her amazing meals, and snuggled her while they watched movies.

She hadn’t dreamed all that. He’d been the one pursuing her. Hadn’t he?

Okay, maybe his kisses had lacked passion, but that had been welcome after Damian who’d groped her on their first and only date. Passion would build as their relationship developed and, one day, he’d ask her to marry him. She’d become Kenia Baxter. There’d be total fireworks by then.

Or not. She should’ve seen it coming. Should have, but hadn’t. Not until yesterday when Gloria entered A Slice of Heaven, the bakery run by the Baxter family, and caught Kenia kissing Jonah. He’d been distracted. He’d made donuts for Gloria — expected her — and Kenia could tell he hoped she hadn’t figured that out. He’d called Gloria when his sister had been rushed to the hospital to save the life of her unborn baby. Not Kenia. No, she found out accidentally, after the fact.

Having those blinders ripped off had been painful, but she had to hold her head up high in the community. Arcadia Valley was small, and everyone knew everyone else’s business. Kenia managed Page Turners, her aunt’s bookstore, so escaping town wasn’t an option. The only salve she’d been able to muster had been breaking up with Jonah before he broke up with her.
She’d brought the basket of books and the Page Turners gift certificate out to the benefit concert as promised, ready to tell anyone who noticed she was alone that she’d called it off with Jonah. She hadn’t expected to be required to witness Cole Anderson proposing to Allie Bigby.

That guy in the back of the barn. Who was he? Not a reader, or she’d have seen him in the book-store… unless he was one of those who preferred e-books or bought his paperbacks online. She shuddered. Maybe he was a friend of Cole’s from out of town, just visiting for the concert. Probably that was it. A better thought than him not being a reader or not supporting the local bookstore.

Kenia pulled into the parking spot in front of her small cottage. She’d never see him again. That was fine. She needed time for her broken heart to mend.

To read Zane’s reaction to their first meeting (and it’s a doozy!) click here: Chapter One of Harvest of Love

Have you read Danica Favorite’s Arcadia Valley Romance novel, The Sound of Romance? If so, you’ve enjoyed Allie and Cole’s romance, and probably recognized the setting of my opening scene!

Have you read Elizabeth Maddrey’s Arcadia Valley Romance novel, Donuts & Daydreams? If so, you watched the trainwreck of Kenia’s illfated romance with Jonah Baxter. Whew, they both get a happily-ever-after… just not with each other.

I’m offering one winner, anywhere in the world, an e-book of Harvest of Love. If you’d like to put your name in the hat, please comment before Saturday, May 19. Winner will be announced in the Sunday Edition.