Several of us have written about our Word of the Year. I shared last month about my word for 2016, which is consistent.

BUT for the last two-ish weeks, the word GRACE has bombarded me from lots of different directions.

It started with me doing a word study on it. The Greek word (charis) 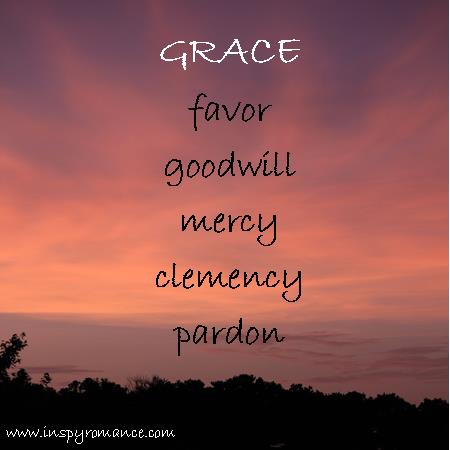 appears 157 times in the New Testament. Not all of those are translated grace, however. Other words used for charis are favor, credit, and thanks.

While I was in the midst of my study–it took several days–my husband asked this question at the dinner table: “What is grace to you?” We discussed it for two evenings.

Bombarded with Grace at #InspyRomance

When a word comes at me like that, I try to pay attention. Sometimes it takes longer than others for me to get the message.

I remember as a teenager, I learned the definition of grace was

But grace was apparent before Christ paid for it. Luke tells us that “the grace of God was upon Him [Jesus].” (Luke 2:40)

So I headed to dictionary.com. There are fifteen definitions for grace. Several definitely do not apply. But here are the few that do:

So now I’m wondering if I’ll receive grace/favor in something coming my way, or if I’ll need to show grace to someone else. Either way, I covet it your prayers.