One of the absolute best things about reading a novel with any type of romance is spying on those first few meetings. The witty conversations, butterflies in the stomach, flirting glances…they’re all so important. It’s not enough to envision the heroine falling for the guy—the reader has to fall for the guy, too.

As a writer, if I can make myself fall for the hero, I figure I’ve made a pretty solid effort. My first series was told through the first-person viewpoint of Camdyn Taylor, and I immersed myself into the character so completely that when she met Cole Parker, I loved him too. I still love him, and probably always will. It’s a hazard of the job. 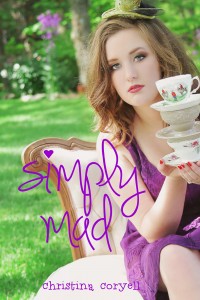 My recently released novel, Simply Mad, was an entirely different ballgame. Madeline has known Josh practically all her life, and they’re best friends. There are no cute meetings to detail, because those happened when the main characters were five and six. To make things more difficult, Josh is in the Navy and is stationed overseas, so those face-to-face meetings look more like Skype sessions and telephone calls.

As a result, instead of those flirty first conversations, the readers are introduced to Josh as the steadying force amid Maddie’s crazy family and strange work environment. While this scenario produced a challenge in the fact that they couldn’t meet and feel those first sparks, it also provided an extra layer that new acquaintances wouldn’t have. Josh knows Maddie completely…all her quirks, insecurities, and hang-ups. He loves her anyway…just not in a romantic way. Or does he?

Listen in on one of Josh and Maddie’s telephone conversations, where they’re talking about love (of course) and a guy Maddie is interested in dating.

“You’re not looking for someone ordinary,” he counters, a hint of sarcasm creeping into his voice. “Sure, maybe you’ll give a guy the time of day, if he’s exactly the right height, laughs properly, has the same taste as you in reading materials, doesn’t eat any food you think is gross, his facial structure is perfectly symmetrical…”

“Hey, what is this, another ambush? You’re worried about my stellar dating strategies? Your mom’s not coming over here to stage another intervention, is she?”

“No, forget it,” he breathes with a sigh of exasperation—a sound that makes my heart drop in my chest a couple inches. “How is the pirate, anyway?”

Pulling my knees up against my chest on the couch, I fiddle with the hem on my jeans as I listen to the quiet sound of him breathing on the other end of the line.

“Pirate? I have no idea what you’re talking about.”

“Your tennis instructor, with the long flowing hair and the goatee. He looks like the guy from that pirate movie.”

Well, on second thought, I guess he might resemble him a little.

“I never said he acted like a pirate, I simply said he looks like a pirate. But now that you’re protesting, I think maybe I spoke too hastily. Arr, Maddie, be ye here to learn the art of tennis this fine day? Just let me remove ye olde hook and replace it with ye olde tennis racket. Aha! Shiver me timbers, but don’t make me run too far, on account of me olde peg leg.”

“Very funny, Josh, but there’s nothing going on between me and Max.” Not yet, anyway. “Besides, how do you even know about him? I didn’t mention him to you.”

“What did Jess say about him? This is a little annoying! Don’t you people know the meaning of privacy?”

“You’re interested in him, that’s all. I’m surprised you didn’t bother to mention it to me, but I get it. Is there anything to this one other than the fact that he’s good looking?”

“Of course not, just a handsome pirate,” I quip, shaking my head.

“Honestly, Josh, sometimes I think you must believe I’m the shallowest person in the world. Max is funny and intelligent, and we have lengthy conversations about lots of things. He hopes to travel to Barbados soon—that’s where his father lives. He has a shipping business there.”

“So the guy who’s definitely not a pirate has a ship in Barbados?”

“Sometimes you’re on a ship. Does that make you a pirate?”

In the end, it was pretty easy to make myself fall for Josh.

Giveaway: I’d like to share him with one of you. Comment on this post with your favorite love story, and one of you will get a signed copy of Simply Mad delivered to your door. If you live in the USA, that is. Otherwise, I’ll gift you an e-book. You may enter through Wednesday, July 29, and the winner will be announced in the Sunday Edition on August 2.

Check out my other novels in The Camdyn Series. A Reason to Run is FREE through July 26th, and A Reason to Be Alone is only $.99. 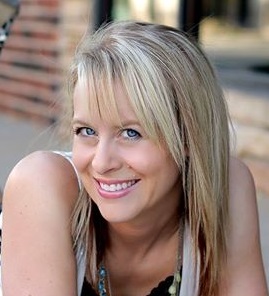 Christina Coryell is an Amazon bestselling author of Christian women’s fiction who lives in southwest Missouri with her husband and two children. She is rarely alone when she does her writing, which leads to lots of creative situations. She’s written with kids climbing on her, loud guitar riffs playing in the background, and while cheering on her favorite baseball players. Her books include the highly rated Camdyn Series (A Reason to Run, A Reason to Be Alone, A Reason to Forget, and For No Reason) as well as the Girls of Wonder Lane series. Simply Mad is available now, and the second volume, Crowned, will be available late August.