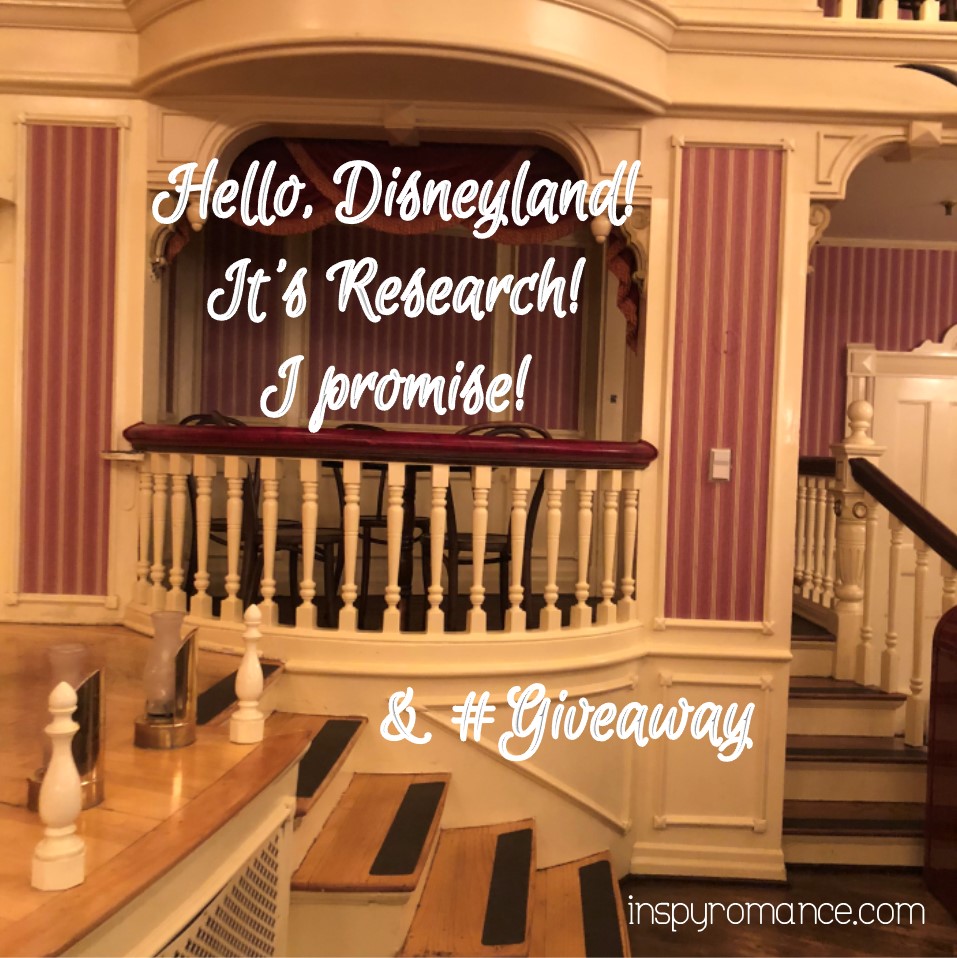 My new accountant wasn’t sure whether or not he could believe me. 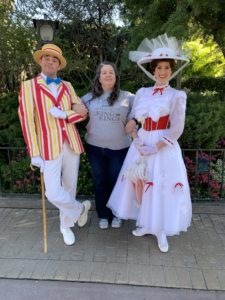 Of course, everyone’s going to try to find a way to make it at least a little cheaper.

But it really was research.

And I even managed to convince him.

Now, I wasn’t traveling from almost the exact population center* of the US to California just to spend two days (and a ton of money) to see the Mouse, but as long as I was doing it anyway, why not apply some of it to a book? 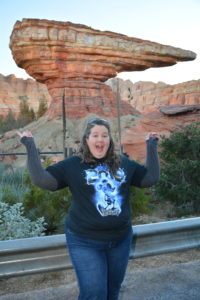 The reason I was headed to CA was to be the nanny for some of my best friends. They were headed to a three-day seminar and didn’t want to leave their six-month-old at home with grandparents, etc., so they asked if I wanted to tag along.

We were going a couple of days early just so we could hit Disneyland before they had to check in.

But the best laid plans of mice and… well, you know… 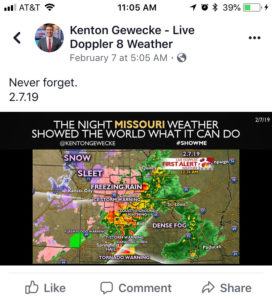 The night before we left, Missouri had pretty much every weather known to man – the only warnings we didn’t have in the state all at the same time were a blizzard warning, hurricane warning, and heat advisory.

So none of us had much sleep the night before we left, (in fact, the other mom got actually zero) but we’d be in California by three or so, right?

Our plane’s de-icer didn’t work, and it was freezing fog outside. 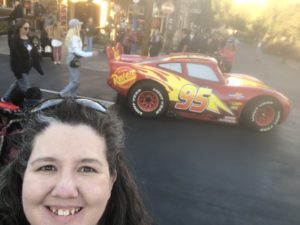 Our 11am flight didn’t leave until 830pm** and for various other reasons, we didn’t get to our hotel until almost 1am. We had to be on the 430am shuttle back to the airport. We landed in California about 8am, got the rental, went to the airbnb, unloaded our stuff, loaded the amusement park stuff, and headed out.

We didn’t park in the best lot (we didn’t know there was more than one at the time), but made it to Main Street USA in time for our 1150am lunch reservation.

We paid the little bit extra for FastPasses on our phones (SO worth it) and hit about 8-9 rides of the rides we really wanted to go on while we were there that day, but left about 9 or so, exhausted. (We also used rider swap where two of us went on the ride while the other stayed with the baby, then swapped and two other ones went on the ride.) 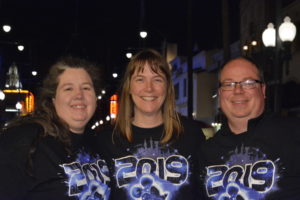 By the time we made it to California Adventures on Saturday, it was nearly 1 in the afternoon – catching up on sleep was a priority Saturday morning, plus a Walmart run so we weren’t paying $4.50 a bottle for water anymore.

We stayed until Disneyland itself closed at midnight.

We didn’t get to take advantage of the FastPasses*** quite as much because it was busier and the good ones were already mostly gone by the time we arrived that late.

But we had a great time.

If you know me much at all, you know Cars is one of my all time favorite movies – and not just kids’ movie. 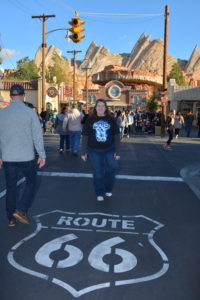 I didn’t get to meet Doc Hudson but…

Mater promised to teach me how to backwards drive!

Got my picture taken with Stanley’s statue.

Won the race around Willy’s Butte.

Did my first three Facebook Lives**** ever (except the Macy’s parade on my personal page) on this trip.

While we were in the parks, I also met Mary and Bert (did you know Disneyland is inside one of Bert’s chalk drawings?), Nick Wilde and Officer Judy Hops, Captain James Hook, Goofy, one of Cinderella’s mice, Maleficent (she called me a vermin!), and, of course, Mickey and Minnie. 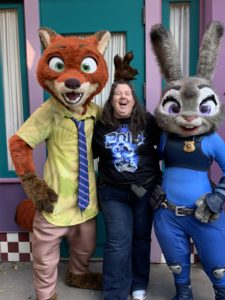 I was so incredibly impressed with how much the actors and actresses with full heads on were able to convey emotion and have full discussions without ever saying a word. (Officer Hops hasn’t found the missing mammals yet.) And the “face” actors stay in character completely (I think I might have heard Bert break character for half a second when it was just the two of them for a moment). Mary and Bert were fantastic! Later, we saw them doing a show with songs from the movie. Maleficent called the mouse from Cinderella a rat then called me vermin as she turned. (Those were the only “face” actors we saw.)

So how does this translate to research? 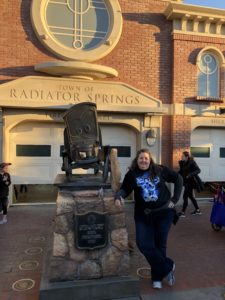 Well, my current couple are both widowed. His children are 6, 8, and 10 or so. Her ten kids range in age from 12-26. They decide that, before they get toooooooo involved, they’re going to take at least the minors to a theme park for a couple of days and spend them like normal people – and not cut lines and such like royal families are likely to be able to do – just to make sure they can get along as a big, blended family.

They won’t have the kind of flight delays we did (hello private jet!), but they will wait in line under the watchful eyes of their undercover security details.

I spent most of yesterday over at my friends’ house in their rec room. I wrote about 5K words total. I’d wanted more, but spent about an hour planning out the rest of the book (with help from dear friend and plotting guru, Jennifer Major) then another hour figuring out what these two amusement parks look like (with a lot of help from that other mom).

They’re not too far from Serenity Landing, Missouri where much of my US based books take place. It’s possible we’ll see an old friend or two pop in to help with directions or something.

My hero? His name is Thor.

There just might be an area of Norse mythology so that Thor will have to get his picture taken with Thor ;).

Watch for Thorliana’s story coming next month! To be among the first to see the cover/title reveal and get preorder information, join the Serenity Landing Book Club or my newsletter!

For your chance at an ecopy of Thorliana’s story when it releases, let me know what kind of things you’d like to see in your ideal theme park! 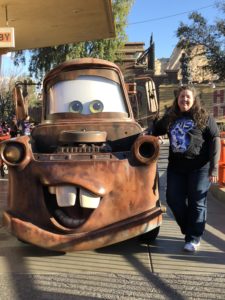 *According to census.gov: “the place where an imaginary, flat, weightless, and rigid map of the Unite States would balance perfectly if all residents were of identical weight.”

**Because of the fog the day before, flights were full of people who’d been delayed already. There was no room for three of us anywhere. We were told they rounded up people in Dallas trying to get to Springfield, put them on a new plane and sent them in then took us back. I was in the restroom when the plane landed so I’m not sure if anyone actually got off or if they just sent a new plane for us because the next day was already oversold too.

***With the FastPass thing, we also got the pics taken by their photographers – about half the ones in this post are those

****You can find them:
At the airport
In Disneyland (I don’t know why it’s sideways)
At Flo’s V8 Cafe