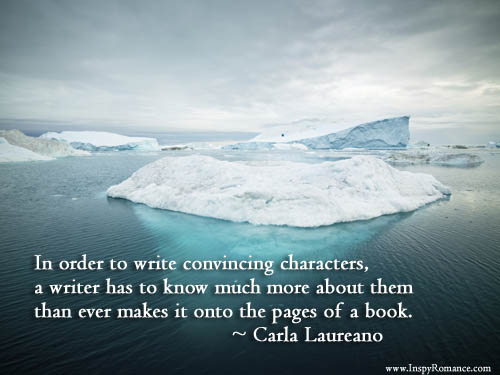 What do icebergs and heroes have in common? No, I’m not talking about writing a leading man so hot he could melt the polar ice caps. I’m talking about character development.

There’s a theory of writing, first espoused by Ernest Hemingway, that says a book is like an iceberg: the reader only sees a small part of what the author knows about the book. I’ve found that to be true. In order to write convincing characters who live and breathe, I have to know much more about them than ever makes it onto the pages of a book.

When I wrote Five Days in Skye, it took me a while to figure out what my heroine, Andrea Sullivan, really wanted, but the character herself came to me fairly quickly. I’d already lived the life of a businesswoman determined to succeed at all costs, so I understood the pressures associated with being a woman in a high-stress career. In fact, many of her experiences were taken from my own corporate days.

But my hero James MacDonald was trickier. The idea of making him a celebrity chef emerged during a particularly intense Food Network obsession. It seemed to me that the handsome TV chefs were selected as much for their biceps as for their braising technique. (Don’t get me wrong, I’m not complaining here.) What would it be like a chef, laboring behind the scenes to ensure the success of your restaurant and then suddenly thrust into the spotlight?

That took me back to the beginning, researching James’s experiences in culinary school and kitchen culture. I spent months reading memoirs, chatting with local chefs and food critics on Twitter, and watching behind the scenes clips from top London restaurants on YouTube. It became very clear to me that professional cooking, with its high-pressure battlefield mentality, draws the iconoclasts and rebels, the ones who would sooner lose an arm than wither away beneath the fluorescent lights of an office. Best make James the younger son, then, and give him a traditionalist older brother who represents everything he doesn’t want to become. But it’s said that if an aspiring chef/restaurateur doesn’t have his own kitchen by age 30, he should give up. That told me James would also be passionate, driven, and dedicated.

But I still needed a “fatal flaw.” A conversation with the friend of a well-known Denver restaurateur enlightened me about the groupies who circulate around top chefs, especially celebs. Finally, my reformed playboy chef with a rakish reputation came fully into focus, with all his associated challenges and conflicts.

Very little of my iceberg of research actually made it into the final book, but without it, I wouldn’t have been able to write a convincing hero that readers can believe they might run into on the street someday.