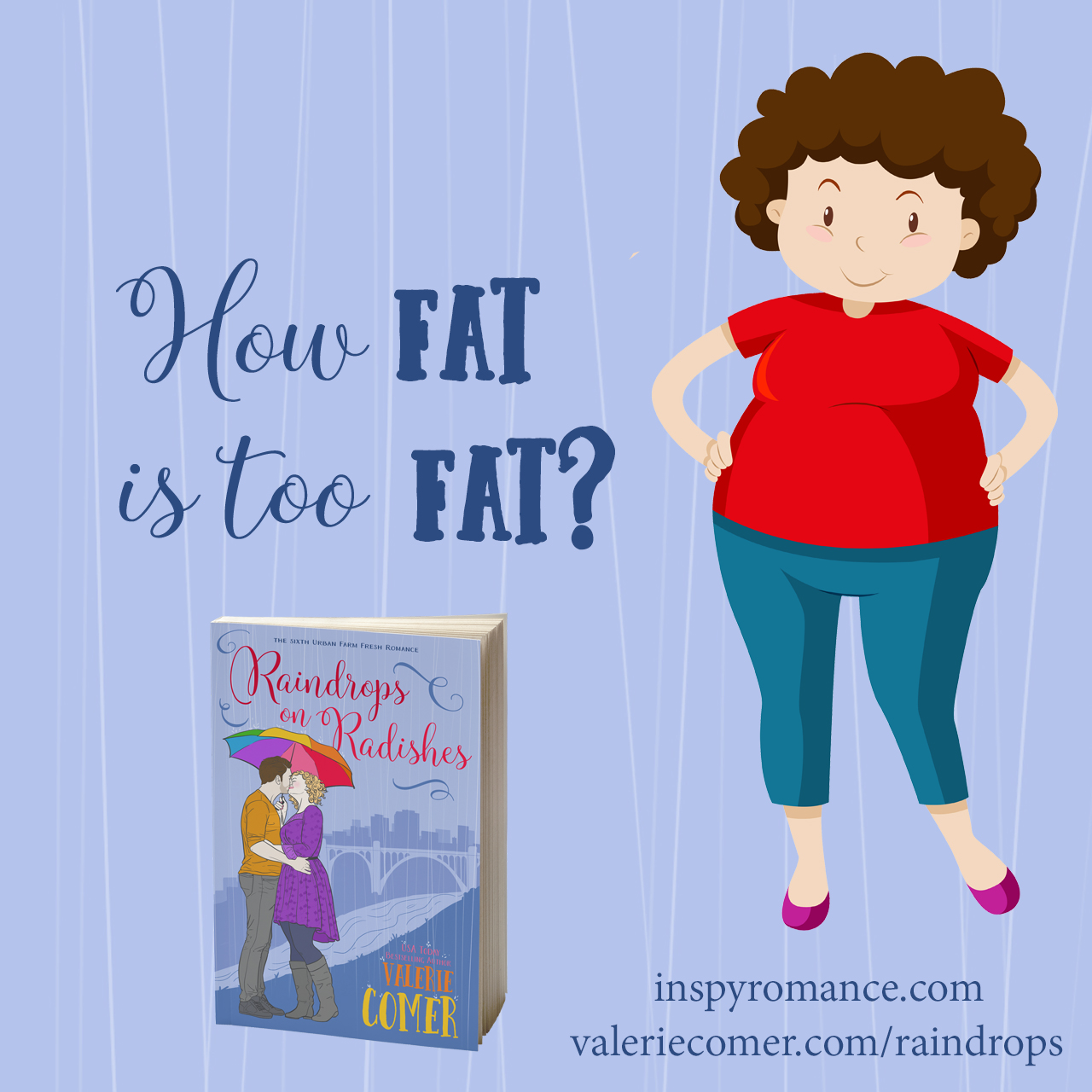 Women come in all shapes and sizes, right? Right. And women say they prefer to read about real women, not heroines who are movie-star glamorous with slender (but perfect) curves, and long, shapely legs the hero can’t keep his eyes off of. Those legs were a recurring theme in a romance I read recently!

Women want relatable characters, or so they say… but how relatable is TOO relatable? How fat is too fat?

Plus-size women are just as beautiful as skinny women, and many men prefer them. There’s no one-size-fits-all… pun intended! The right hero for each heroine will find her amazing and gorgeous and perfect for him. That’s what really matters in a romance, right? The chemistry? But in Real Life™, whether a woman feels attractive to someone else isn’t (or shouldn’t be) the driving force behind her decisions about her body.

If you’ve read my December release, The Cowboy’s Mixed-Up Matchmaker, you’ll remember that Lauren is conscientious about her weight. She’s a busy veterinarian, and she eats her stress… but here’s the thing. She’s busy. She’s active. She goes on long trail rides. Yes, her muscles scream with agony, but it’s doable.

Lauren thinks she’s fat, and her mother’s snide comments affirm that to the reader. But is she? The covers for the Montana Ranches Christian Romance series don’t show the heroine, only the cowboy hero, so I didn’t have to show you the image I had in mind for Lauren. But I divulged it anyway. [Click for Matchmaker’s Pinterest board.]

Years ago when I had a literary agent, I sent her a proposal for a series of books that she didn’t sell and thus I didn’t write, at least not in the format I’d intended at the time. I’ve certainly cannibalized the core ideas for some of the Urban Farm Fresh Romance stories. Over a year ago I realized that the first story in the abandoned proposal would, with very little tweaking, fit Peter Santoro’s situation. I began setting him up for the fall in Wishes on Wildflowers, where he and his two cousins Basil and Jasmine start a venture gardening other people’s urban backyards for profit.

So now we’ve come to a heroine who is a young family lawyer and who not only thinks of herself as overweight but actually is.

My Urban Farm Fresh Romance series covers are illustrated by my daughter, Hanna Sandvig. We found a pose we wanted to use for Raindrops on Radishes, but the woman was too thin to be Sadie Guthrie. Because the covers are illustrated, not straight-up stock photos, we discussed how much padding to put on Sadie.

How much was too much? 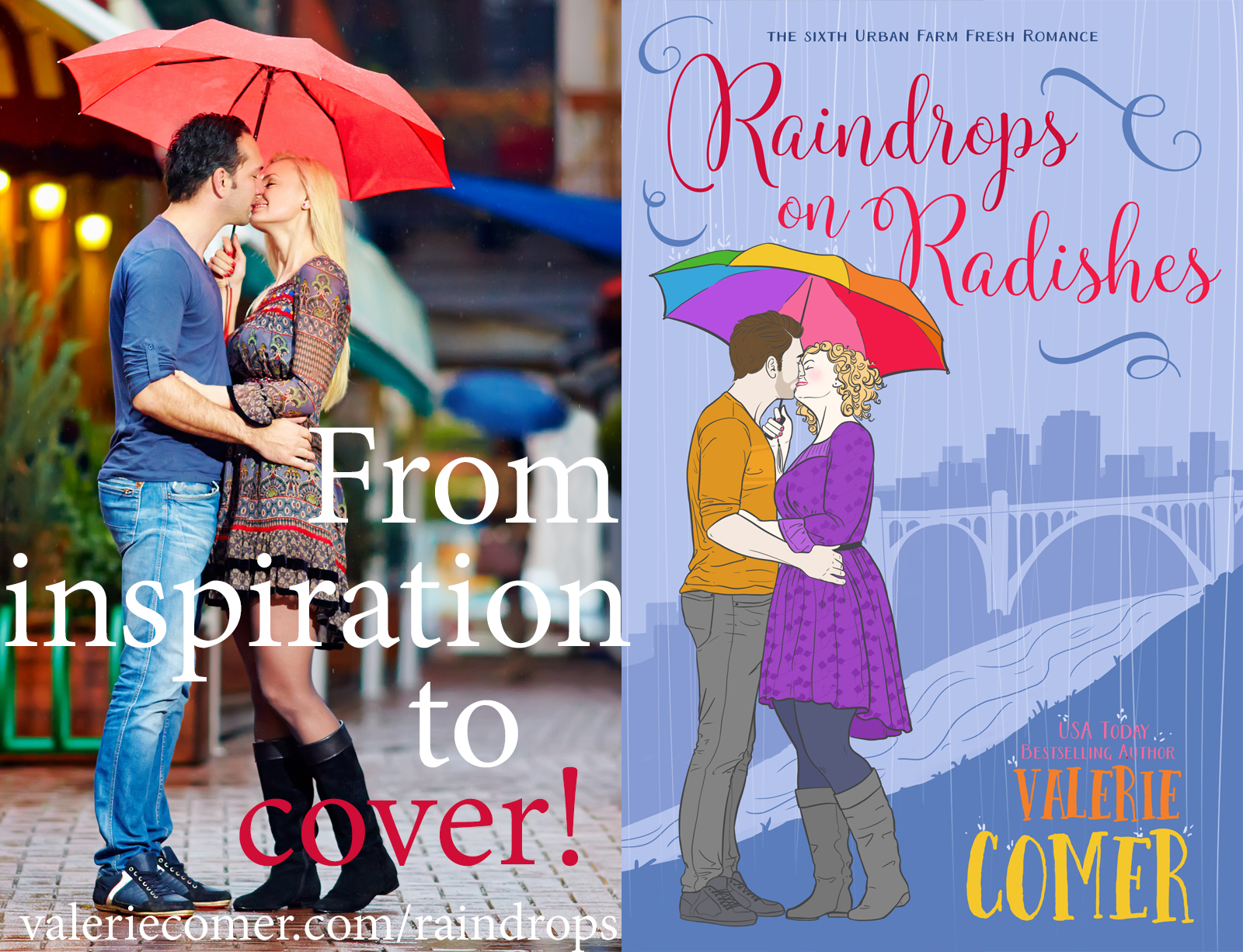 We wanted the cover to be appealing to the widest range of Christian romance readers — of course — but not to deny the fact that Sadie is, in fact, more than five or ten pounds overweight. Sadie is at least as busy as Lauren, but her job is not active. While Lauren wrestles calves to give them shots, Sadie sits at her desk, taps on her keyboard, and counsels clients. Where Lauren gives a (vague) nod to nutritional guidelines, Sadie just doesn’t like vegetables. At all. Cooked or raw. And she doesn’t apologize for the lack.

How on earth did a woman like her get embroiled in a romance with Peter Santoro, who holds down an active full-time job as a biologist for the Department of Fish and Wildlife AND a second job growing vegetables for sale AND loves to play three-on-three basketball with his cousins and friends in his rare spare time? Sadie can’t even walk around one Bridgeview block without huffing and puffing!

Well, that makes for a story, doesn’t it?

About Raindrops on Radishes:

Family lawyer Sadie Guthrie snaps up a heritage house with a backyard perfect for her dreams of a relaxing oasis. Now some guy is digging in her garden and thinks he has a claim to it. Too bad he doesn’t realize he’s taken on an attorney in her den.

Urban farmer Peter Santoro counts on the yard next door for his veggie-growing business. When the old woman dies and the property is sold, the new owner refuses to honor the previous agreement. Peter is soon torn between his need for income and an attraction to the hard-hitting, curvy lawyer, but is his interest for all the wrong reasons?

What’s a guy to do when his arch enemy invites him to be her plus-one at a fundraiser for his favorite charity?

I want you to know there’s no judging here. I carry some extra weight myself. It’s a moot point whether the extra pounds contributed to my heart attack in October, 2017, or whether the undiagnosed heart issues I’d experienced for the nine years prior caused the weight gain that may have contributed to the heart attack. Skinny people can have heart disease, too, and many people who carry more extra weight than I do seem to have healthy hearts! 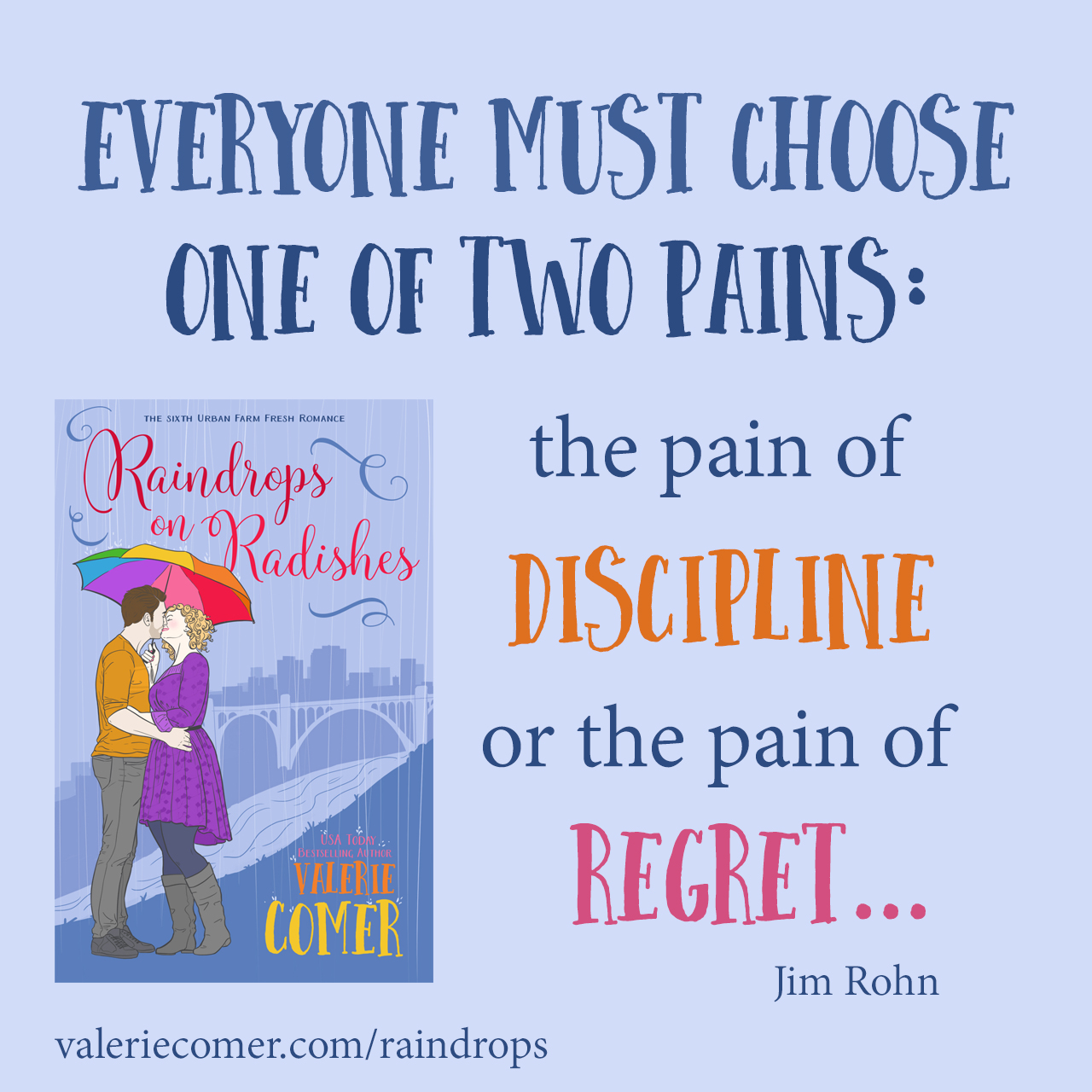 But, I feel like surviving a heart attack gives me a bit of a platform to give you straight talk. Are you sedentary? Make a plan to move around more, however that looks for you, and then do the plan. Get out in nature more. Take more walks. Eat more veggies… like radishes! While scares can come out of seemingly nowhere, in general, health is far more about what we eat and how active we are than it is about numbers on a scale.

Talk to me. What do you do to keep healthy? What could you do better?

And… would you read a romance with a “fat woman” on the cover? Because Raindrops on Radishes is now on pre-order, and Sadie could use your support as she struggles with her weight and seeks out her happily-ever-after.