My NaNa introduced me to romance novels.

Of course, like all little girls I read Cinderella and Snow White and Beauty and the Beast. But I didn’t think of these stories as romances so much as fairy tales inhabited by both evil and fairy godmothers, as well as princes who rescued fair maidens from unfair circumstances. The romance was almost secondary to the magical happily ever after.

But the books my NaNa read? Now those were romances from beginning to end. I can still see my grandmother sitting at her small dining room table that she always kept covered with a plastic tablecloth. She’d be eating her usual breakfast of two eggs, toast with butter and grape jelly, and a strong cup of coffee. In her hand was an open paperback – a Harlequin novel. I don’t know where she got them, but I know she owned them because she always wrote her name on the title page in ballpoint pen: Mary Naughton.

There was little romance in my grandmother’s life. She was separated from my grandfather for more years than she was ever married to him – separated, but never divorced. A single, working mother long before it was the norm. Her romantic happily ever after eluded her – maybe that’s why she read Harlequin romances. Every story promised love conquering all, no matter what troubles erupted after boy-met-girl.

Somewhere in my early teens, I started borrowing my NaNa’s Harlequins. This was back when the romances were clean. When the kisses faded into nothing more than an innocent young girl’s imagination. Happy ending. Close the book – and I was on to the next story.

My next introduction to romance novel was thanks to the library, where I discovered the 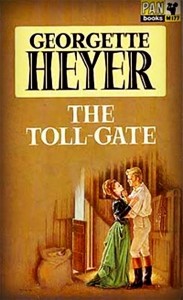 writings of Georgette Heyer. As an author, Heyer is credited with founding historical romances and also with establishing the Regency romance. Of course, I didn’t know that at the time. All I knew was that here were stories with a combination of two things I loved: history and romance. Novels were about lady-meets-lord in the early 19th century in England. At balls. Riding in coaches. Racing horses. In parlors and parks. The language, the clothes – all of it was unfamiliar, but it was still romance and, in the end, happily ever after.

Falling in love with romance novels doesn’t just happen. Some how, some way, you discovered a certain book that captured your attention, your imagination. Maybe a friend gave you a book as a gift, saying, “I love this author!” Or you just randomly picked a book off the library shelf or found one at a garage sale because you liked the cover. You’ve read my story about how I started reading romance novels … what’s yours?

Do you remember how you fell in love with romance novels? I’d love for you to share your story in the comments!

How did you fall in love with romance novels? @bethvogt